The March 3rd attack on the visiting Sri Lankan national cricket team in Lahore was the latest in a series of troubling headlines from Pakistan, where extremist groups are increasingly demonstrating their ability to strike throughout the country. Last September, a Marriott hotel in Islamabad, the nation’s capital, was bombed, killing more than 50 people, and overall there have been approximately 60 suicide bombings in Pakistan in each of the last two years.

In recent months, Taliban fighters have terrorized much of the once stable Swat Valley, implementing a strict version of Islamic law, banning music, closing girls’ schools, and killing opponents. Earlier this month, the government agreed to a truce with supposedly moderate elements within the Taliban in Swat Valley, although whether the truce will hold and what it will mean for local residents remains unclear.

These headline-making assaults have, however, been perpetrated in a country where public support for extremism has declined sharply in recent years. Surveys by the Pew Research Center’s Global Attitudes Project have found progressively lower levels of acceptance of suicide bombing as well as waning confidence in Osama bin Laden.1 There is only modest support among Pakistanis for al Qaeda or the Taliban. And few agree with their widely noted tactic of preventing education for girls.

Nonetheless, while the trends are positive, sizeable minorities still embrace extremism — for instance, one-in-three continue to express confidence in bin Laden, who many intelligence analysts believe is hiding somewhere in western Pakistan. And while most Pakistanis are worried about religious extremism, polling by the International Republican Institute (IRI) suggests they are not convinced the Pakistani army should be used to fight radical groups. Instead, most would prefer making a peace deal with extremists.

As recently as 2004, roughly four-in-ten (41%) Pakistani Muslims said suicide bombing and other forms of violence against civilians could be justified to protect Islam from its enemies. However, by the time of the April 2008 Pew Global survey — following a four year period in which numerous suicide attacks took place within Pakistan — only 5% held this view.

Attitudes toward bin Laden have also turned more negative, although the decline is less steep. In 2005, about half (51%) of Pakistanis expressed confidence in bin Laden to do the right thing in world affairs. Three years later, roughly one-third (34%) voiced this opinion.

The 2008 poll also found that, on balance, Pakistanis expressed negative opinions of al Qaeda and the Taliban. Still, about one-quarter of Pakistanis had favorable views of these groups, and many were unable, or unwilling, to offer a rating. “Don’t know” responses were especially common among women and respondents from the North-West Frontier Province (NWFP), which shares a border with Afghanistan. 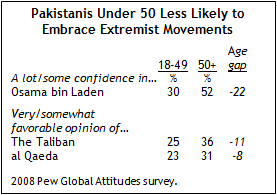 The survey also found that younger Pakistanis were less likely to embrace extremism. Only three-in-ten under age 50 expressed confidence in bin Laden, compared with about half (52%) of those age 50 and older — a difference of 22 percentage points.

Less pronounced, but still notable, differences were found between younger and older Pakistanis on views of the Taliban and al Qaeda. Only a quarter (25%) of those under the age of 50 said they had a favorable opinion of the Taliban, while more than one-third (36%) of those 50 and older expressed a favorable sentiment. Similarly, Pakistanis under 50 were less likely than those in the 50-plus age category to express a favorable view of al Qaeda (23% vs. 31%).

One of the Taliban’s most notorious tactics in the Swat Valley has been the destruction of schools for girls. On this issue, as the 2007 Pew Global Attitudes poll demonstrated, they are out of step with the vast majority of Pakistanis.

There were no significant differences between men and women, or between younger and older Pakistanis, on this issue. However, the view that education is equally important for girls and boys was slightly less common among ethnic Pashtuns than among members of other ethnic groups. While a majority (54%) of Pashtuns held this view, a large minority (32%) believed education is more important for boys.

Strong Concerns About Extremists, But No Consensus on Fighting Them

Overwhelmingly, Pakistanis are worried about the impact of extremism. In 2008, 72% said they were concerned about Islamic extremism in their country, and over half — 54% — said they were very concerned, the highest percentage among the eight countries on the survey where the question was asked (the others were Egypt, Jordan, Indonesia, Lebanon, Nigeria, Tanzania, and Turkey).

Similarly, an October 2008 IRI poll found that 60% of Pakistanis characterized religious extremism as a serious problem. However, the same poll found limited support for using the Pakistani military to combat extremist groups.

Just 38% of Pakistanis supported using the Army to fight extremists in NWFP and the Federally Administered Tribal Areas (FATA), while half opposed such efforts. About one-third (34%) said they would like to see the Army confront al Qaeda, while 52% disagreed with this view. There was even less enthusiasm for taking on the Taliban — 30% favored this approach, 56% opposed it.

Nonetheless, support for military action had increased since IRI’s previous poll in June 2008, when only 27% wanted the Army to fight extremists in NWFP/FATA, 22% said it should fight al Qaeda, and 20% felt this way about the Taliban.

The October poll also found considerable support for cutting a deal with radical groups — 54% agreed with the statement “I support a peace deal with the extremists,” while just 35% disagreed. The question did not specify any particular groups of extremists, but it is clear that, as a general approach, the Pakistani public preferred compromise. Here again however, the minority supporting confrontation was growing — in June, 64% had supported a peace deal and only 18% had opposed one.

Declining Support for TerrorismEducating GirlsStrong Concerns About Extremists, But No Consensus on Fighting Them