This pattern in jobs lost may change as the economic crisis deepens and spreads across broader swaths of the economy. The Congressional Budget Office projects that the number of employed workers will decrease by nearly 27 million in the coming months, nine times the loss from February to March. Also, signs have emerged that the jobs of many white-collar workers are increasingly at risk. It is possible that being able to work remotely will offer less protection as the COVID-19 downturn nears its trough.
END_OF_DOCUMENT_TOKEN_TO_BE_REPLACED 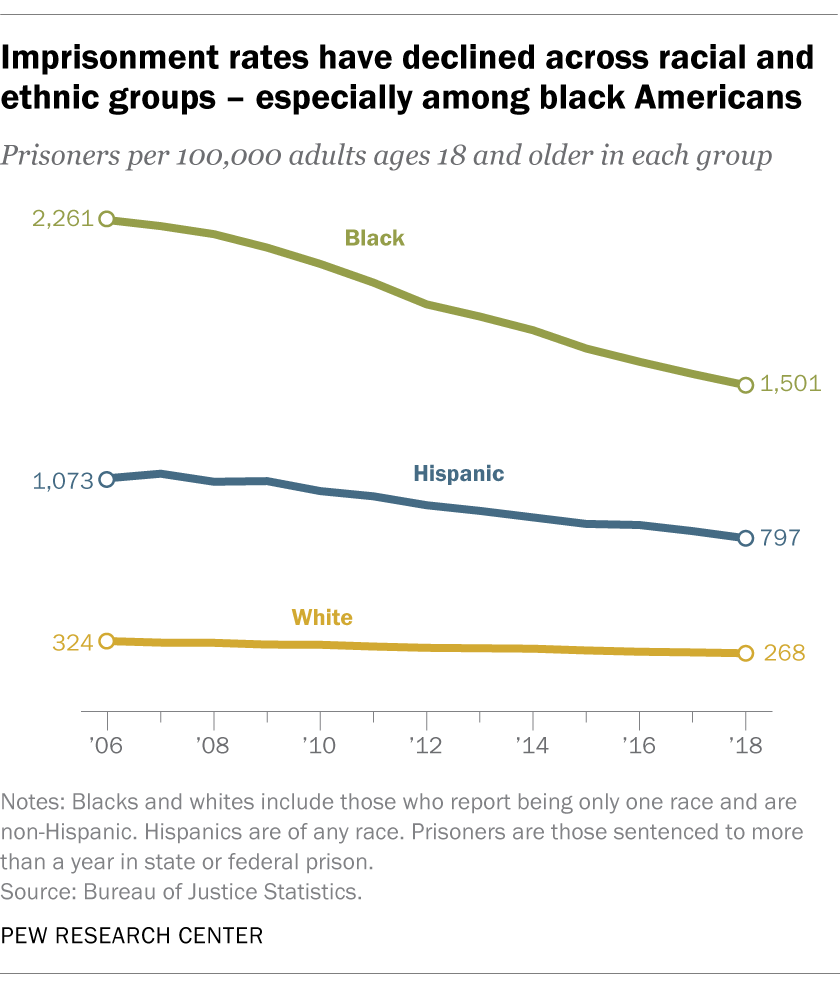 Imprisonment rates have also declined for the two other major racial or ethnic groups tracked by BJS – Hispanic and white Americans – though not as much as among blacks. Between 2006 and 2018, the imprisonment rate fell 26% among Hispanics and 17% among whites.
END_OF_DOCUMENT_TOKEN_TO_BE_REPLACED

Here are some key findings about race, ethnicity and the COVID-19 outbreak, drawn from surveys conducted during the first months of the crisis. END_OF_DOCUMENT_TOKEN_TO_BE_REPLACED

END_OF_DOCUMENT_TOKEN_TO_BE_REPLACED 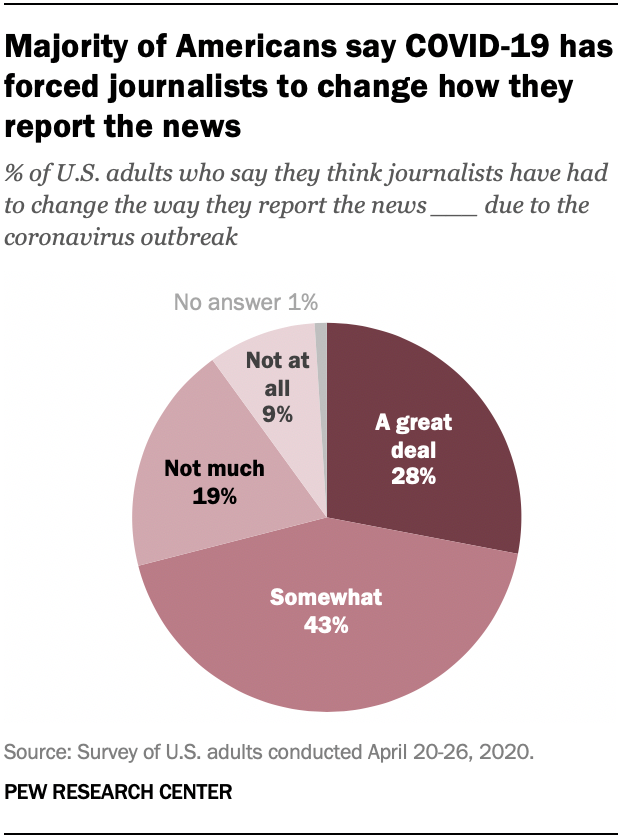 Despite reports of the outbreak’s economic toll on the news industry, the public’s sense about its impact on the financial well-being of most news organizations is far from clear. Roughly one-third (34%) of adults say they are not sure about that impact; about another third (32%) say the pandemic has hurt those organizations financially, either by a little or a lot. Equal shares say it has not had much impact financially (17%) or that it has helped news organizations’ bottom lines a little or a lot (17%).
END_OF_DOCUMENT_TOKEN_TO_BE_REPLACED

END_OF_DOCUMENT_TOKEN_TO_BE_REPLACED

Related video: The coronavirus pandemic’s impact on our polling

In this age of widespread mobile phone ownership, internet access and globe-spanning communications, it may surprise some readers to learn that the Center still relies so heavily on face-to-face interviewing. The objective of our surveys is to represent an accurate cross-section of a country’s population. So, if a sizable share of people in a country do not have access to a phone, a phone survey may not be the best choice. In many countries where this is the case or access to new technologies isn’t widely available, a face-to-face approach can be a better method to collect representative data. END_OF_DOCUMENT_TOKEN_TO_BE_REPLACED

The internet and smartphones have long been embedded in Americans’ lives. But as the COVID-19 outbreak has led government officials to close nonessential businesses and schools and issue stay-at-home orders, many aspects of everyday life have migrated online.

Some Americans – particularly those who are younger or college educated – are finding virtual ways to connect, shop and be active during this time, according to a Pew Research Center survey that asked U.S. adults in early April about six types of online and mobile activities they may be engaging in due to the outbreak. 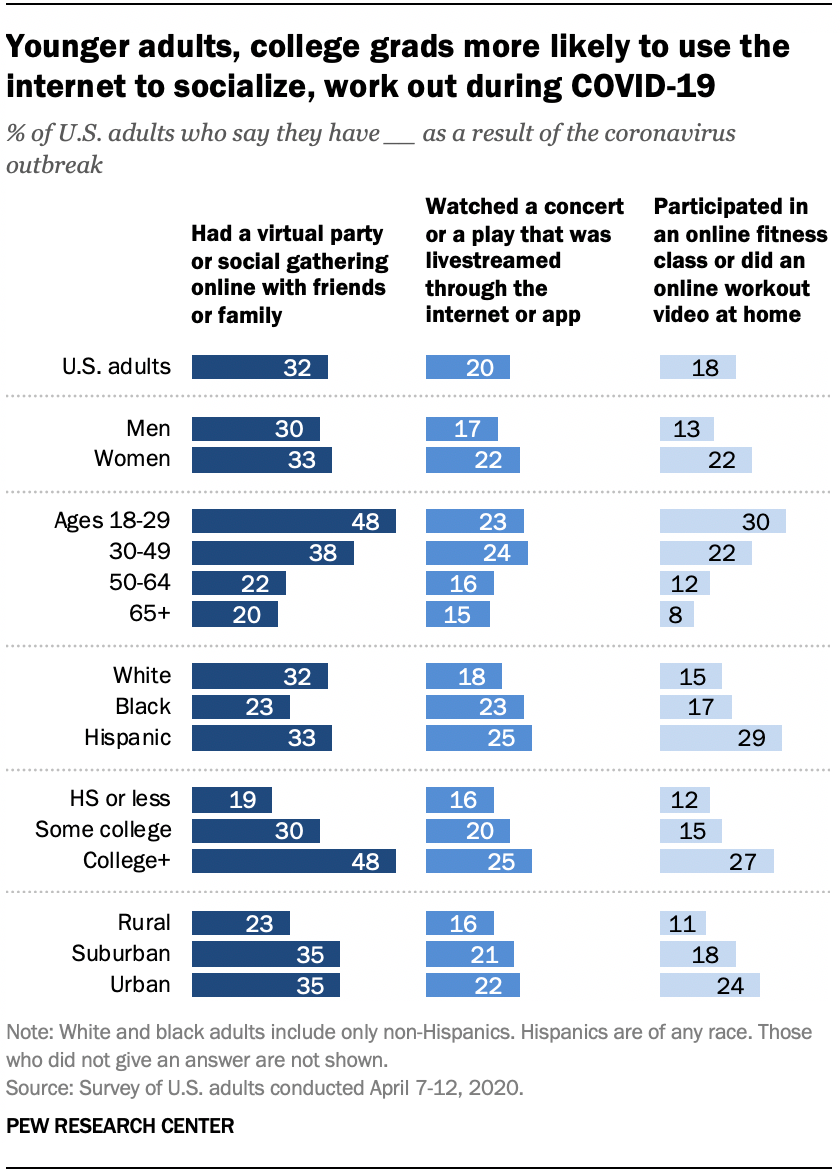 Roughly a third of Americans (32%) say they have had a virtual party or social gathering with friends or family, according to the April 7-12 survey. (Survey questions were posed to internet users on the Center’s American Trends Panel. Throughout this analysis, findings are reported as shares of the adult population.)

In addition, 17% of adults say they have attended a class online for school as a result of the coronavirus outbreak. Most postsecondary schools throughout the United States have shut down their campuses and shifted to online classes.

END_OF_DOCUMENT_TOKEN_TO_BE_REPLACED 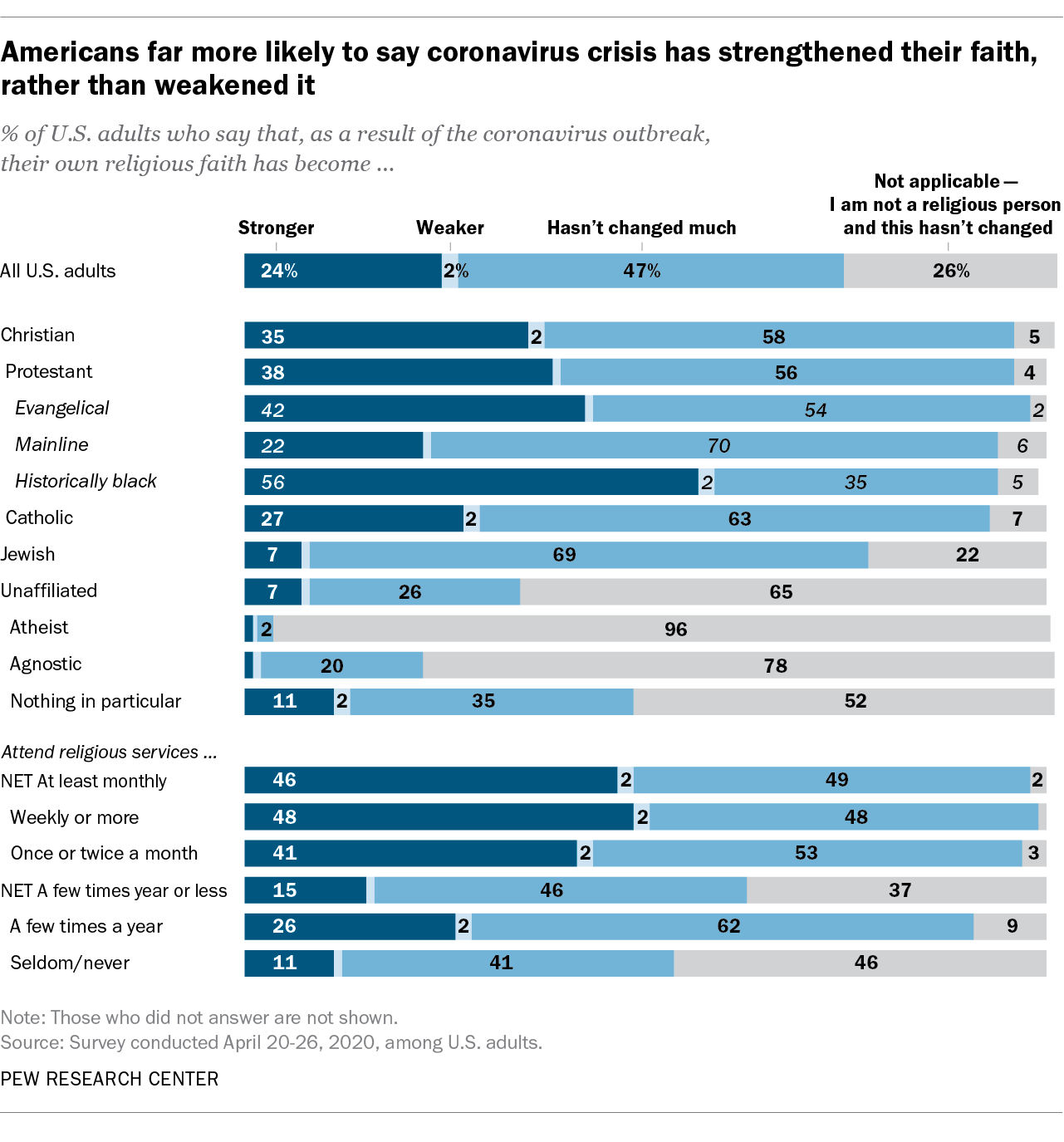