This report on views toward the press in countries around the world relies on data from multiple surveys.

Data for the first three charts is drawn from a survey conducted in 34 countries from May 13 to Oct. 2, 2019, totaling 38,426 respondents. The surveys were conducted face-to-face in Africa, Latin America and the Middle East, and on the phone in the United States and Canada. In the Asia-Pacific region, face-to-face surveys were conducted in India, Indonesia and the Philippines, while phone surveys were administered in Australia, Japan and South Korea. Across Europe, the survey was conducted over the phone in France, Germany, the Netherlands, Spain, Sweden and the UK, but face-to-face in Central and Eastern Europe, Greece, Italy, Ukraine and Russia.

Data for the fourth chart is drawn from a survey conducted by telephone across eight Western European countries from Oct. 30 to Dec. 20, 2017, totaling 16,114 respondents.

Data for the fifth chart is drawn from a survey conducted across 38 countries from Feb. 16 to May 8, 2017, totaling 41,953 respondents. The surveys were conducted over the phone in Australia, Canada, France, Germany, Japan, the Netherlands, Russia, South Korea, Spain, Sweden, the UK and the U.S. Surveys were conducted face-to-face across Africa, Latin America and the Middle East, as well as in China, Greece, Hungary, India, Indonesia, Italy, the Philippines, Poland, Russia and Vietnam.

For the purpose of comparing educational groups across countries, we standardize education levels based on the UN’s International Standard Classification of Education (ISCED). The lower education category is below secondary education and the higher category is secondary or above in Brazil, India, Mexico, Nigeria, South Africa, Tunisia and Ukraine. The lower education category is secondary education or below and the higher category is postsecondary or above in Argentina, Australia, Bulgaria, Canada, the Czech Republic, France, Germany, Greece, Hungary, Israel, Italy, Japan, Lithuania, the Netherlands, Poland, Slovakia, South Korea, Spain, Sweden, Turkey, the UK and the U.S.

1Majorities across Europe, North America and Latin America say it is very important to have freedom of the press, according to a 2019 survey of 34 countries. Support is highest in Greece, where 89% say it is very important that the media can report the news without government censorship. Majorities in many other countries – including Australia, Turkey, the Philippines, Ukraine, South Africa and Nigeria – say the same. Freedom of the press is considered very important by fewer than half of adults in South Korea, Japan, Israel, Indonesia, Russia, India, Tunisia and Lebanon. 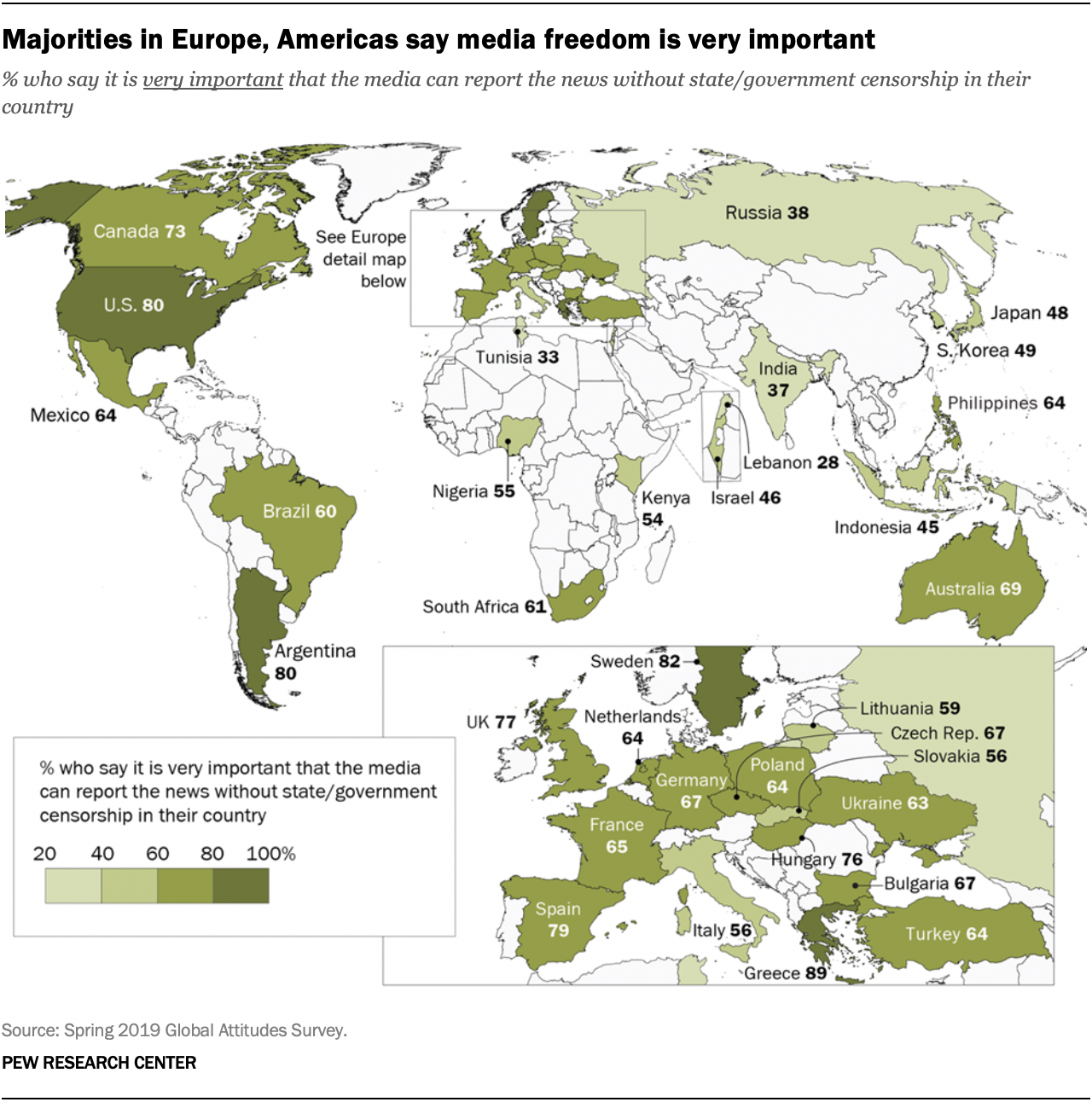 2Support for freedom of the press has increased since 2015 in several nations. The percentage who say it is very important that the media can report the news without state or government censorship has risen in 11 countries since 2015, including 19 percentage point increases in France, the UK and Turkey. The increases come amid a documented decline in media freedom around the world over the same period. (In addition to freedom of the press, support for freedom of speech rose in 10 countries over the same period.) Meanwhile, the percentage of people who say press freedom is very important declined between 2015 and 2019 in Germany, Italy, Russia and Brazil. 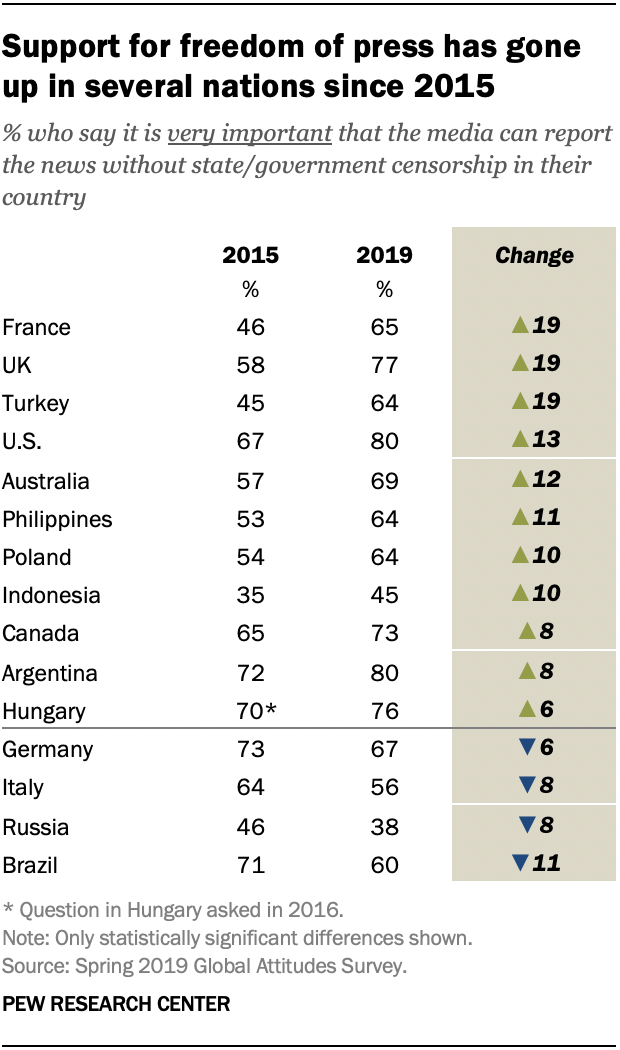 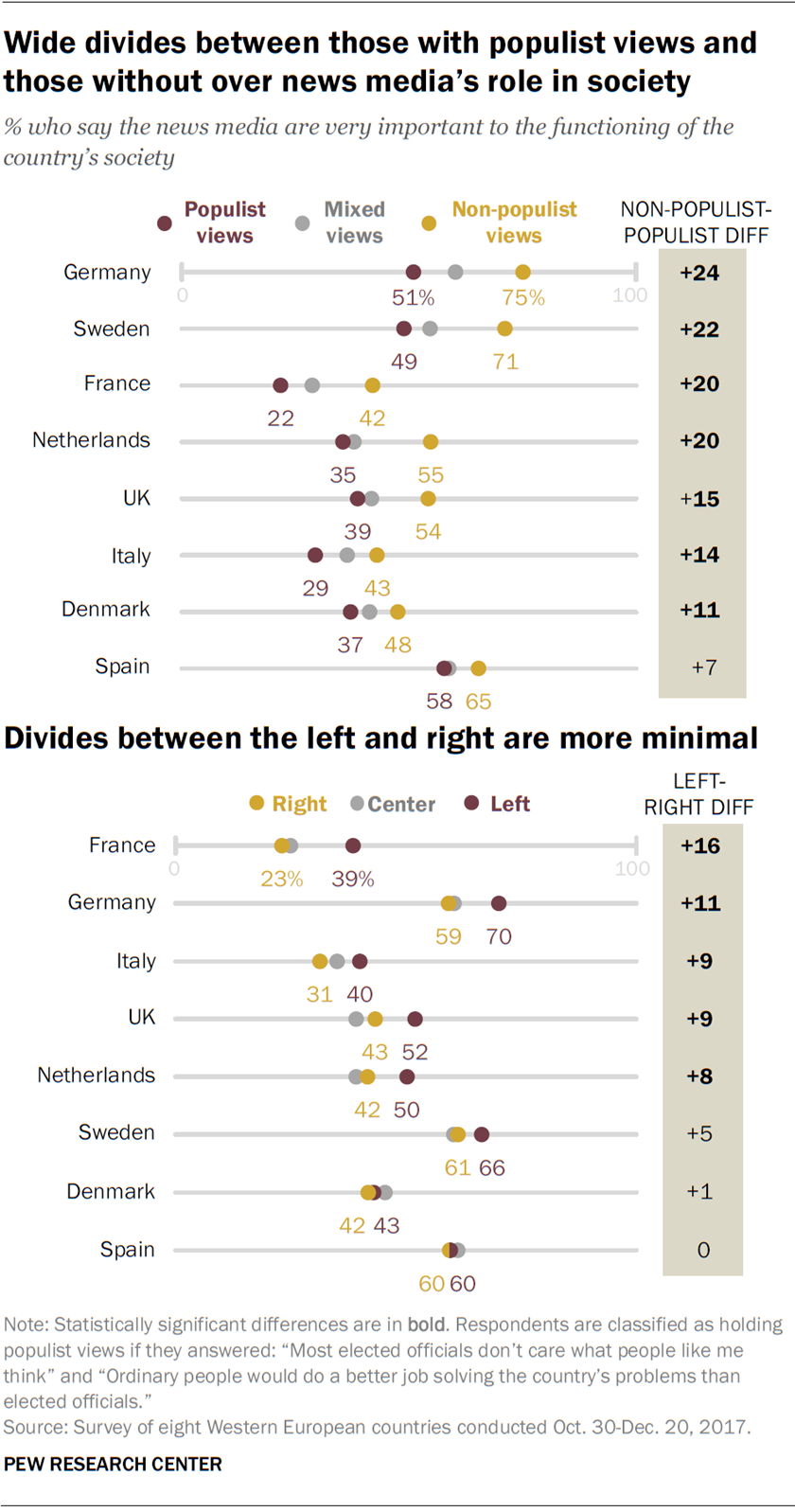 Correction (May 21, 2020): Due to an error, the text in the last section of this post has been revised to more accurately reflect the question wording as asked. This correction does not affect the accompanying graphic or materially change the analysis of the report.