It’s been 50 years since the first Earth Day on April 22, 1970. The event – a “teach-in on the environment” launched by U.S. Sen. Gaylord Nelson of Wisconsin – called attention to the aftermath of a massive oil spill off the Santa Barbara coast the prior year. The protest helped set the political stage for a decade of new regulations, including the Clean Water Act and the Endangered Species Act.

Earth Day has since expanded across the globe, bringing citizens together – at least virtually for 2020 – to educate, mobilize and celebrate. While the event focuses on a range of environmental concerns, climate change has loomed especially large over the past decade, sometimes sparking major protests urging more action to reduce it and its effects.

This year’s Earth Day comes at a unique moment. People in many countries remain under stay-at-home orders to help mitigate the spread of the coronavirus, and the resulting shifts in transportation, industrial activity and consumer habits are leading to a decline in carbon emissions. Whether such declines will be temporary or lasting remains unclear.

For Earth Day 2020, we take stock of U.S. public opinion about global climate change and the environment, based on recent Pew Research Center surveys.

The data for this post was drawn from multiple surveys. Many findings are from a Pew Research Center survey conducted Oct. 1-13, 2019, among 3,627 U.S. adults.

The October 2019 and Jan. 7-21, 2019, surveys were conducted using the Center’s American Trends Panel (ATP), an online survey panel that is recruited through national, random sampling of residential addresses. This allows for nearly all U.S. adults to have a chance of selection. The surveys are weighted to be representative of the U.S. adult population by gender, race, ethnicity, partisan affiliation, education and other categories. Read more about the ATP’s methodology. Separate surveys were conducted Jan. 8-13, 2020, and Jan. 9-14, 2019, by telephone through a sample of randomly selected U.S. adults. 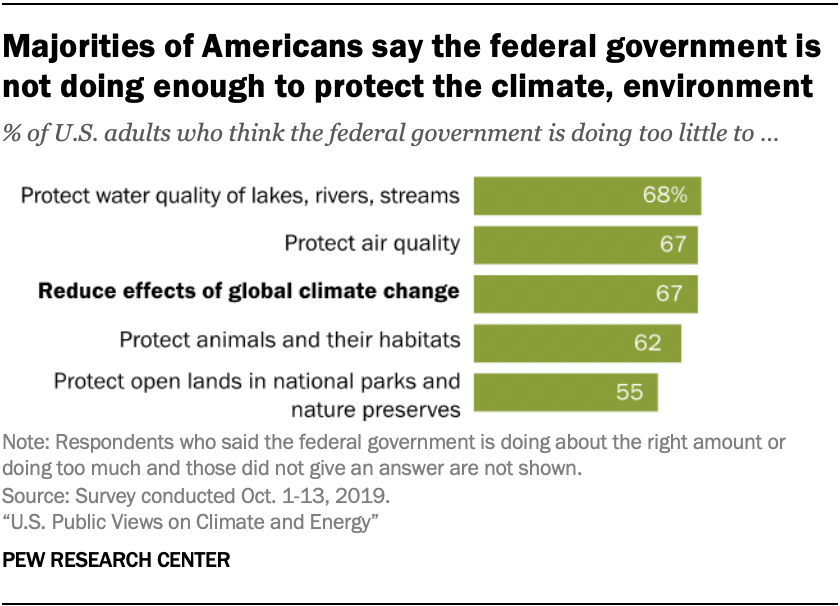 These findings from an October 2019 survey come amid ongoing efforts to roll back regulations designed to protect the environment, including relaxing limits on methane and carbon emissions.

Public concern about climate change has remained steady even as concerns about the spread of infectious diseases have risen. In a survey last month, six-in-ten Americans said global climate change is a major threat to the country, up from 44% in 2009. Respondents who took the survey in the latter part of the month – after the March 13 declaration of a national emergency due to the coronavirus – were about equally concerned about climate change as those interviewed earlier in the month.

See also: U.S. concern about climate change is rising, but mainly among Democrats 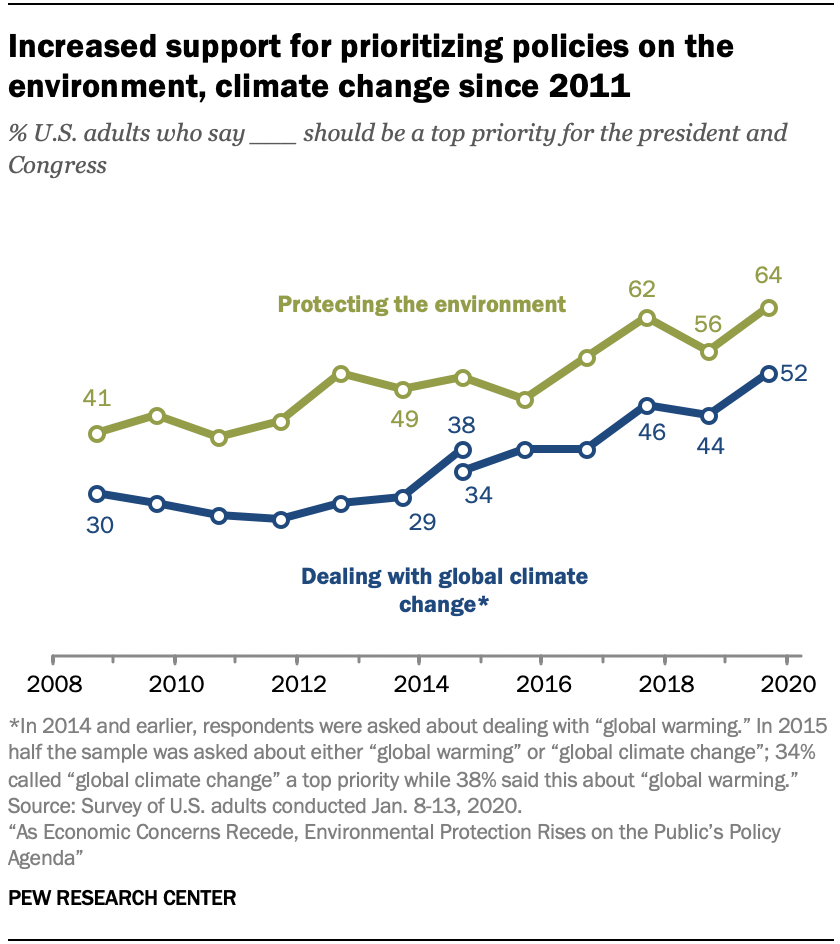 2Compared with a decade ago, more Americans say protecting the environment and dealing with global climate change should be top priorities for the president and Congress. Nearly two-thirds of U.S. adults (64%) say protecting the environment should be a top priority for the president and Congress, while about half (52%) say the same about dealing with global climate change, according to a January 2020 survey. These shares have grown considerably since 2011.

Partisanship remains a major factor in these priorities. More Democrats and Democratic-leaning independents (85%) think protecting the environment should be a top priority for the president and Congress than do Republicans and GOP leaners (39%). Most of the increase in the share of people who prioritize climate change has come among Democrats, not Republicans. 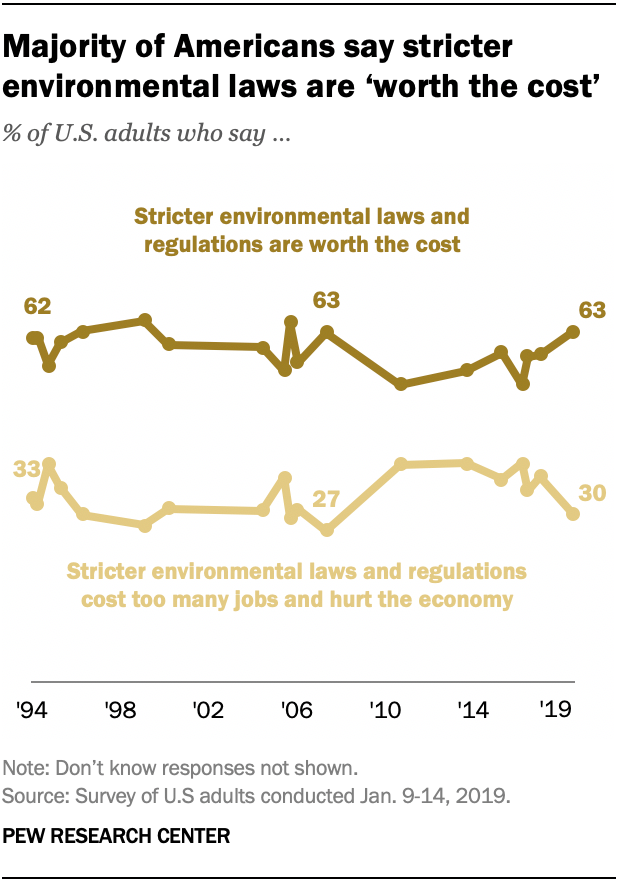 3A 63% majority of Americans say stricter environmental regulations are worth the cost. When asked to choose, most Americans say stricter environmental regulations are worthwhile, while 30% think such laws and regulations cost too many jobs and hurt the economy. Public views on this issue have fluctuated from year to year, although the balance of opinion is nearly the same as it was when first asked 25 years ago.

There are wide partisan divides on this question. As of early 2019, 81% of Democrats (and independents who lean to the Democratic Party) had a positive view of stricter environmental regulations, compared with 45% of Republicans and GOP-leaning independents. Most conservative Republicans (60%) say environmental regulations cost too many jobs and hurt the economy. GOP moderates and liberals take the opposite view: 60% in this group say such regulations are worth the cost. 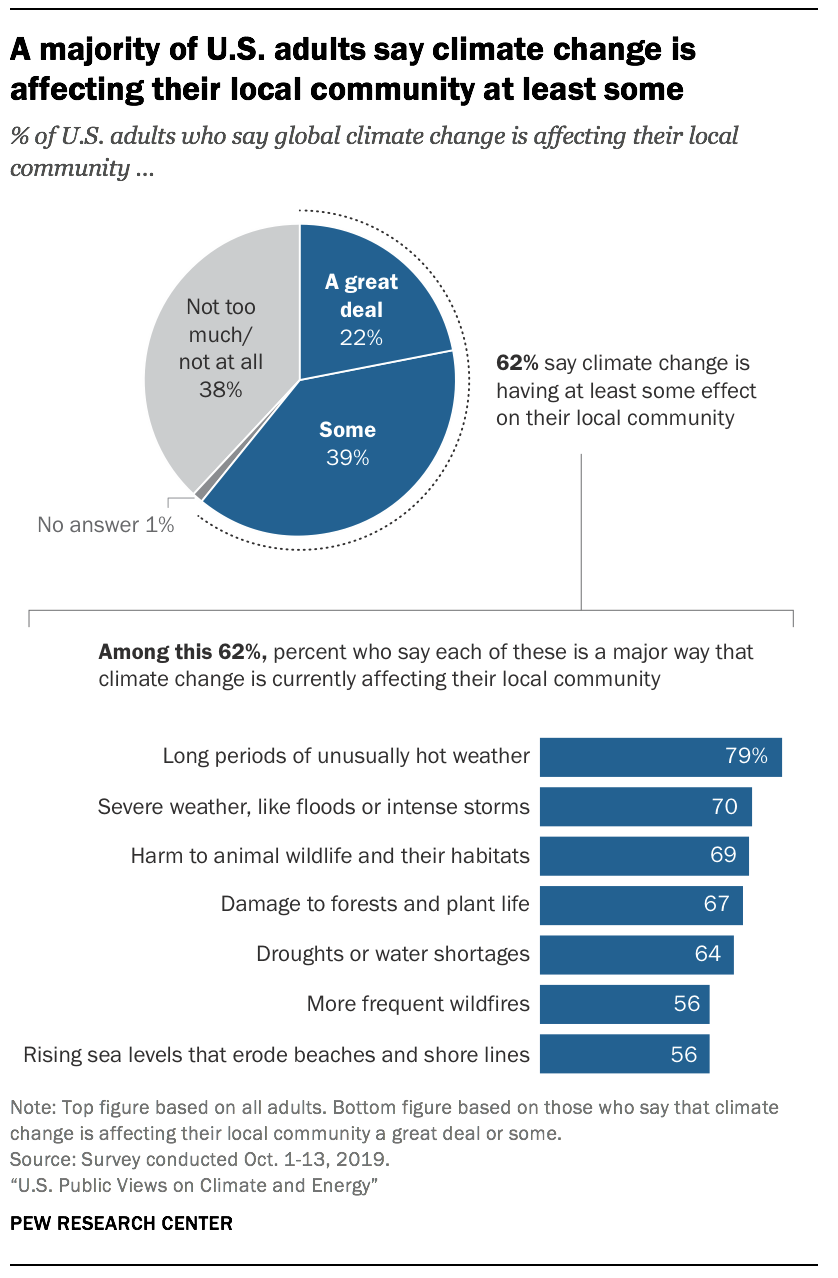 4A majority of Americans see at least some local effects of climate change. In October 2019, about six-in-ten Americans (62%) said that global climate change was affecting their local community a great deal or some. Those who said this were asked which of several possible effects were impacting their area. Most considered long periods of hot weather (79% of those asked) and severe weather patterns such as floods or storms (70%) to be major ways that climate change has affected their local community.

The types of effects people say they experience due to climate change tend to vary across regions. For example, among those who say they see at least some local impacts of climate change, more of those in the Pacific (83%) and Mountain (78%) regions say increasing wildfire activity is a major effect of climate change where they live. This compares with about half or fewer of those living in the South (52%), Northeast (46%) or Midwest (40%). 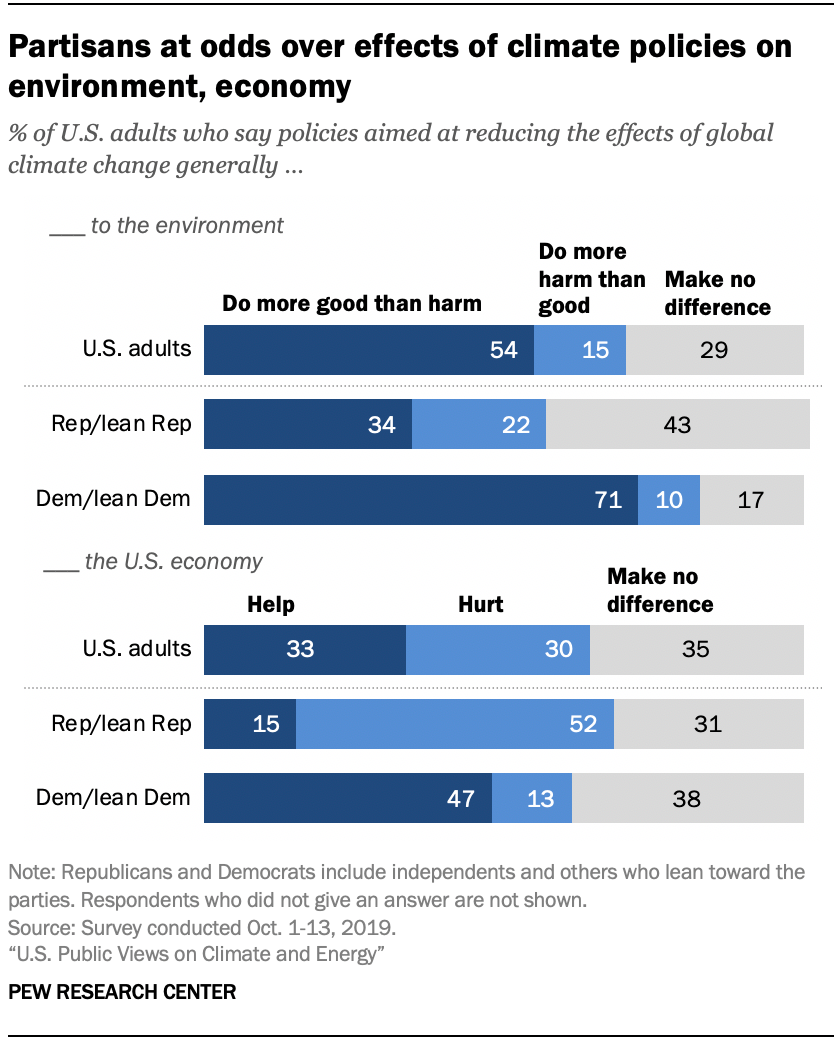 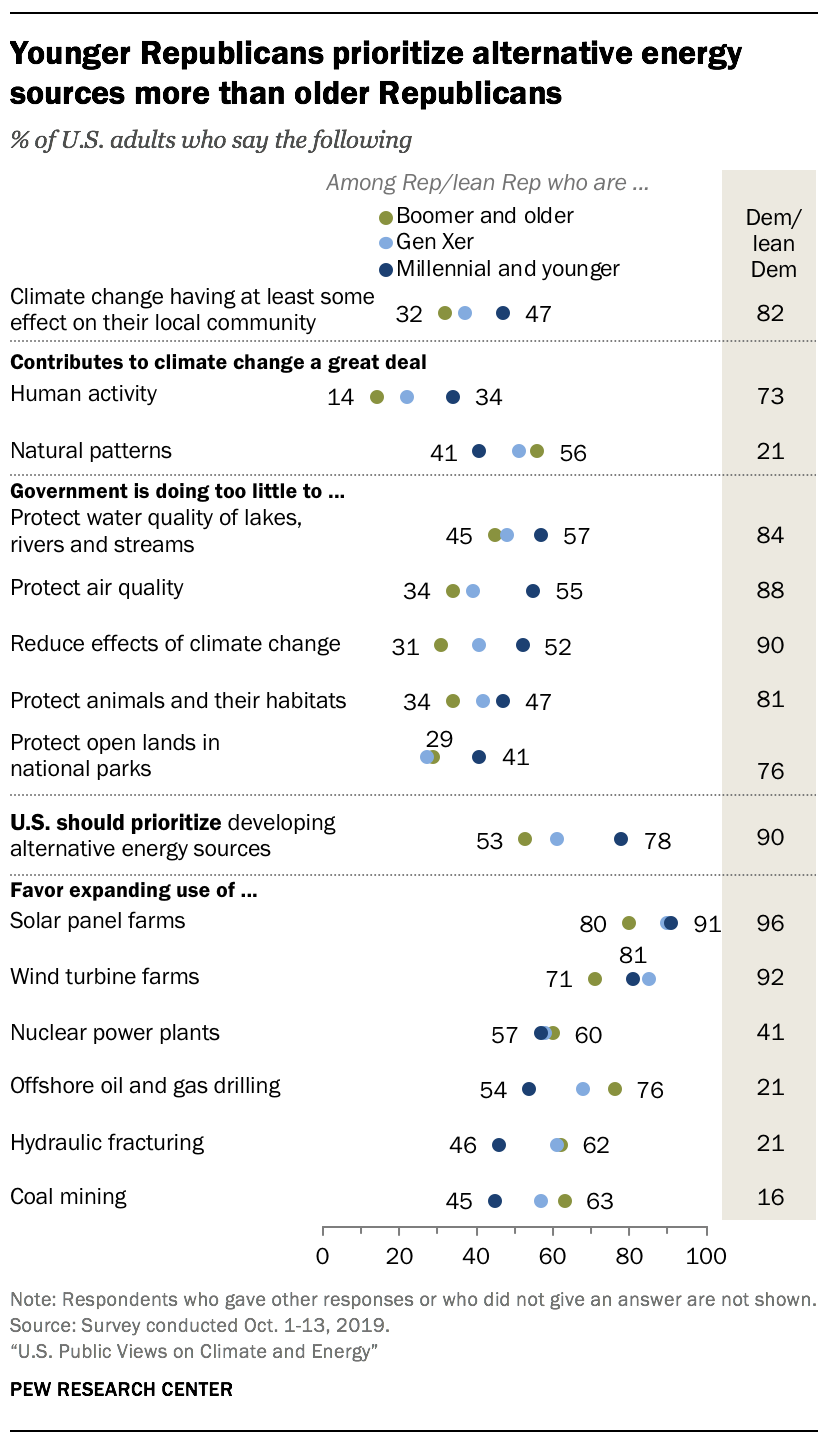 6Millennial Republicans differ from Baby Boomer and older Republicans on a range of questions related to the environment. There is strong consensus among Democrats that the federal government is doing too little on key aspects of the environment, such as protecting water and air quality and reducing the effects of climate change. But among Republicans, there are sizable differences in views by generation. Millennial and younger Republicans – adults born in or after 1981 – are more likely than Republicans in the Baby Boomer or older generations to think government efforts to reduce climate change are insufficient (52% vs. 31%).

GOP Millennial and Gen Z adults are also less inclined than older Republican generations to prioritize fossil fuel development. For example, 78% of Millennial and Gen Z Republicans say the development of alternative energy sources should be a priority for the United States over the expansion of fossil fuel sources, compared with 53% of Republicans in the Baby Boomer or older generations. 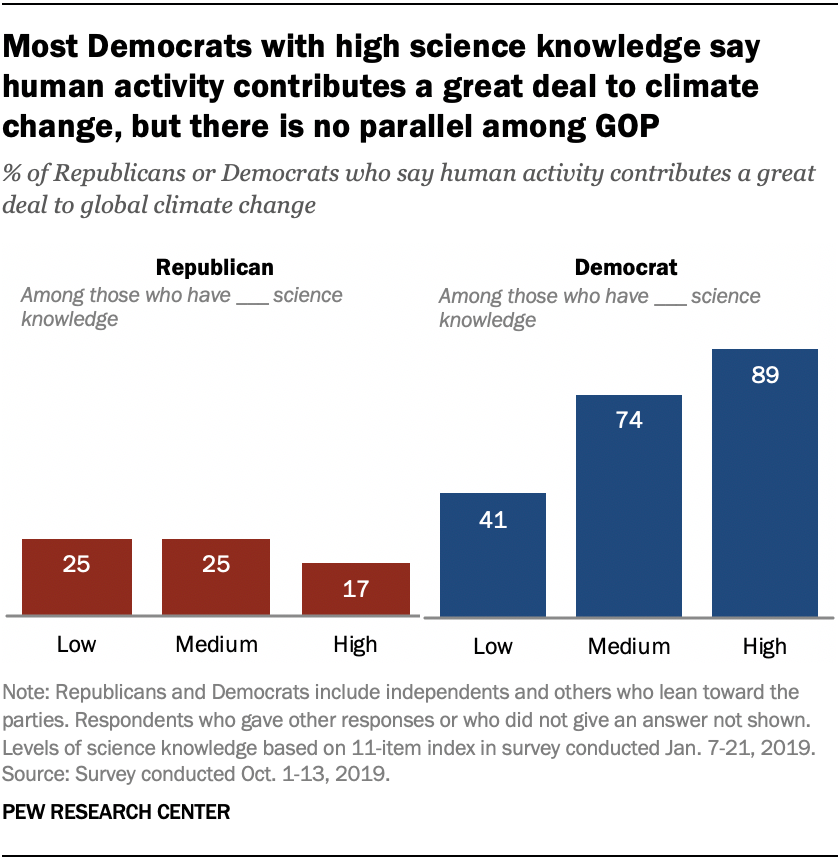 Most Americans say climate change affects their local community, including 70% living near coast
Millennial and Gen Z Republicans stand out from their elders on climate and energy issues
Two-Thirds of Americans Think Government Should Do More on Climate
For Earth Day, here’s how Americans view environmental issues
A look at how people around the world view climate change
Quiz: Where do you fit in the political typology?
Support for Black Lives Matter has decreased since June but remains strong among Black Americans
U.S. Image Plummets Internationally as Most Say Country Has Handled Coronavirus Badly
The 2020 Trump-Biden matchup
An examination of the 2016 electorate, based on validated voters