The American family is changing in many ways: Cohabitation is on the rise, more adults are delaying or forgoing marriage, a growing share of children are living with an unmarried parent, and same-sex marriage is legal in all 50 states.

Amid these changes, three-in-ten U.S. adults think it’s a good thing that there is growing variety in the types of family arrangements people live in, while about half as many (16%) say this is a bad thing. The largest share (45%) don’t think it makes a difference, according to a Pew Research Center survey conducted in June 2019.

Opinions about the growing variety in family living arrangements have changed over the course of a decade. In 2010, somewhat similar shares of adults saw this as a good thing (34%), a bad thing (29%) or something that makes no difference (32%). Since then, the share saying it makes no difference has increased considerably, while the shares seeing it as a good thing or bad thing have declined by 4 and 13 percentage points, respectively.

To learn how Americans feel about the growing variety in family living arrangements in the United States, we surveyed 1,015 U.S. adults by telephone in June 2019 by as part of a broader survey on marriage and cohabitation and young adult independence. The analysis also includes data from a separate survey of 2,691 U.S. adults conducted by telephone in October 2010 as a part of a wider survey on the decline of marriage in America.

In both 2019 and 2010, surveys were conducted in both English and Spanish. Respondents in both surveys were randomly selected via a combination of landline and cellphone random-digit-dial samples. To ensure that the results of these surveys reflect a balanced cross section of the nation, the data are weighted to match the U.S. adult population by gender, age, education, race and ethnicity and other categories. The 2010 sample also oversampled for cohabiting parents, divorced or separated parents, and parents who were never married.

See also: Family life is changing in different ways across urban, suburban and rural communities in the U.S. 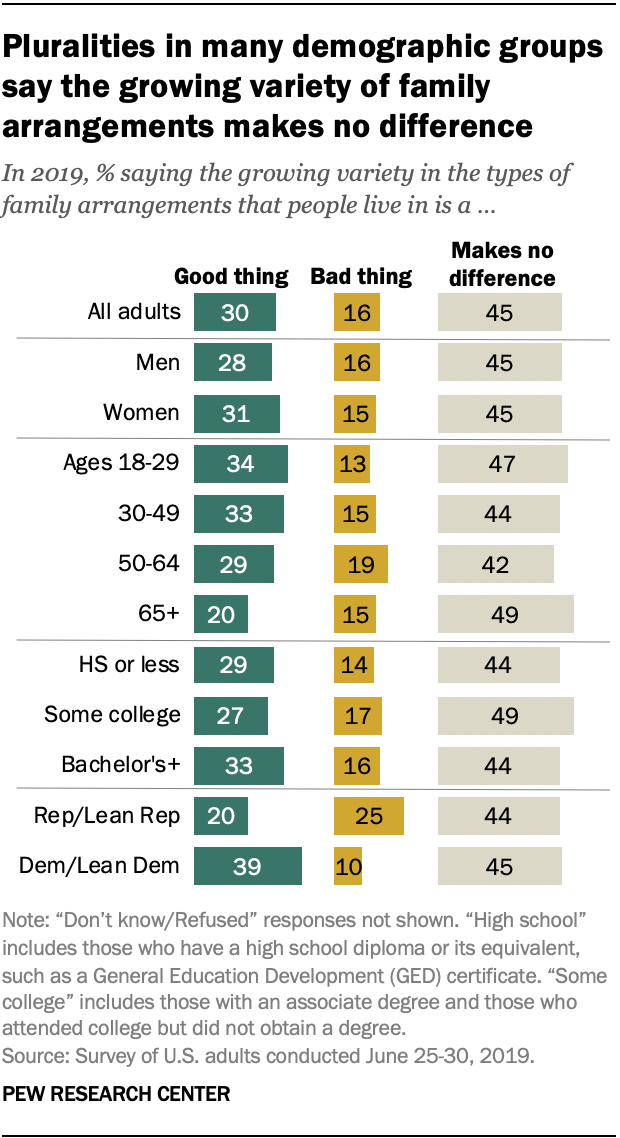 Pluralities across age groups say the growing variety of family living arrangements doesn’t make a difference. But adults ages 65 and older are less likely than those in younger age groups to see it as a good thing. One-in-five adults 65 and older say this is a good thing, compared with 29% of those ages 50 to 64, 33% of those 30 to 49 and 34% of those 18 to 29.

The share of adults ages 18 to 29 who say the growing variety of family living arrangements is a good thing has dropped in the last decade: 46% said this was a good thing in 2010. The shares in this age group who say it doesn’t make a difference or that it is a bad thing remain virtually unchanged. 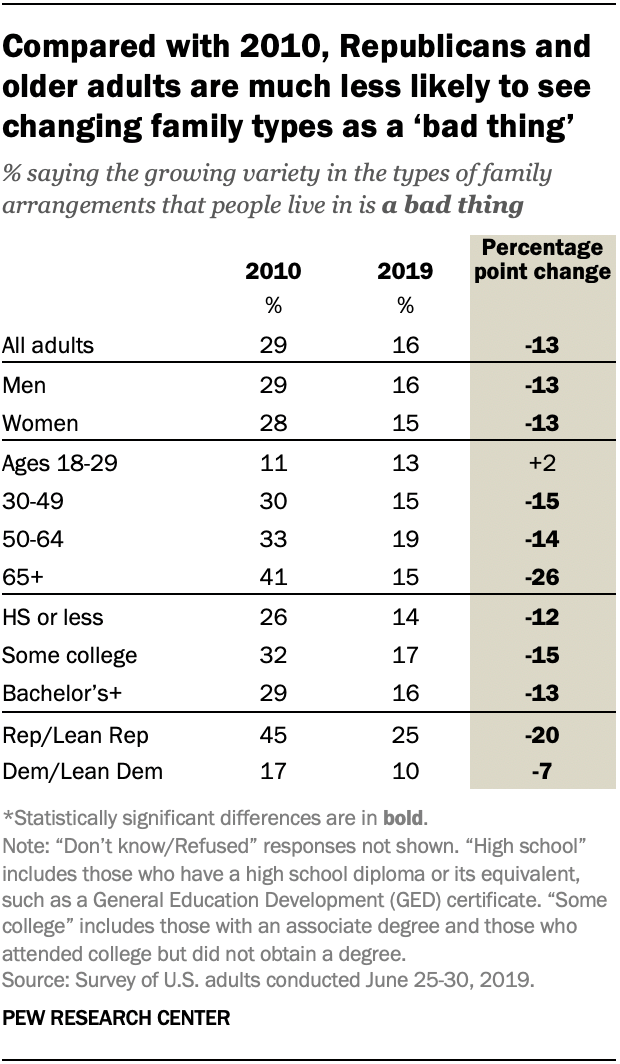 Now, Democrats and Democratic-leaning independents are about twice as likely as Republicans and Republican leaners to say that the growing variety in family living arrangements is a good thing (39% vs. 20%). Republicans, in turn, are more likely to say this is a bad thing (25% vs. 10%). Similar shares in both groups say it makes no difference (44% of Republicans and 45% of Democrats).

While Republicans and Democrats are now significantly more likely than they were in 2010 to say the growing variety in the types of family living arrangements makes no difference – and less likely to say it is a bad thing – the change has been most pronounced among Republicans. A decade ago, 45% of Republicans said this was a bad thing; today, a quarter of Republicans say the same. Among Democrats, 17% said the diversity in family types was a bad thing in 2010, a share that has fallen to just one-in-ten in the latest survey.