Smart speakers such as Amazon Echo or Google Home have gained popularity over the last several years, and consumer experts found that these devices were especially popular with holiday season gift buyers last year. But even as some Americans are integrating these devices into their homes, many owners express concerns over data collection and personalization, according to a Pew Research Center survey conducted June 3-17, 2019.

Here are five findings about Americans and smart speakers:

1Smart speaker ownership varies across demographic groups. One-quarter of U.S. adults say they have a smart speaker in their home. However, ownership of these devices varies, especially by age and annual household income. Adults younger than 50 are more likely than those 50 and older to say they have this type of device in their household (29% vs. 19%). And while around one-third of Americans living in households earning $75,000 or more a year (34%) say they have a smart speaker, that share drops to 15% among those whose annual family income falls below $30,000. 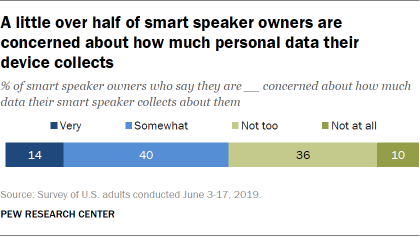 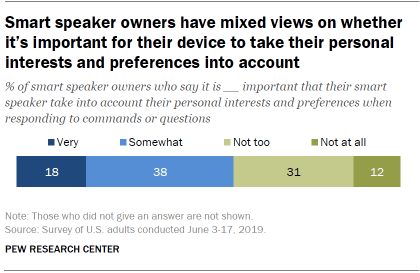 Americans who own smart speaker devices have mixed views on whether it is important for this technology to personalize their preferences. About one-in-five speaker owners (18%) say it is very important that their speaker take into account their interests and preferences when responding to questions or commands, and another 38% say it is somewhat important. About four-in-ten Americans who own a smart speaker (43%) say it is not too or not at all important to them that their device is personalized in this way. 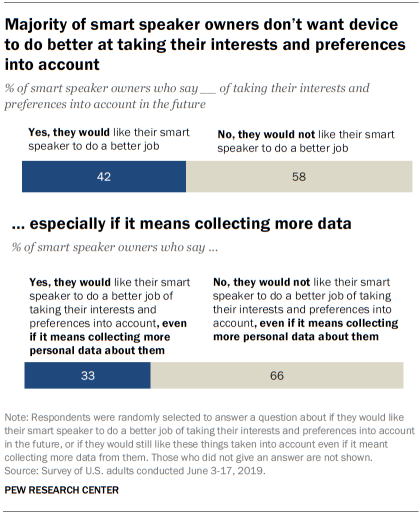 The second group was asked a more detailed question: whether they would like their speakers to do a better job of taking their interests and preferences into account in the future, even if that meant it would need to collect more personal information about them. Only 33% say they would appreciate their interests and preferences being taken more into account, even if it meant more personal data collection, while two-thirds (66%) said they would not like that.

4Americans are wary of data from smart speakers being used in criminal investigations. In a recent Center report, 49% of Americans said it is unacceptable for the makers of smart speakers to share audio recordings of their customers with law enforcement in order to help with criminal investigations. Just 25% said it is acceptable. This contrasts with some other data use practices measured in the survey. For instance, 49% of U.S. adults say it is acceptable for the government to collect data about all Americans to assess potential terrorist threats, while 31% believe that is unacceptable. 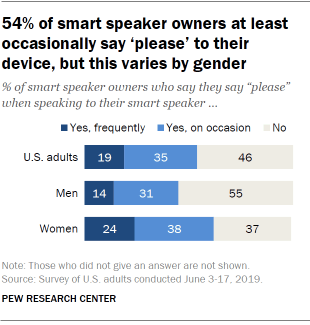 Some owners try to be polite when addressing their smart speakers. More than half (54%) of smart speaker owners report that they ever say “please” when speaking to their device, including about one-in-five (19%) who say they do this frequently. And while the shares of Americans who say this tend to be similar across many groups, there are some notable differences by gender. Women are more likely than men to say they at least occasionally say “please” to their smart speaker (62% vs. 45%).

5 things to know about Americans and their smart speakers

The Internet of Things and Future Shock: Too Much Change Too Fast?

How will the Internet of Things look by 2025?