In key ways, today’s digitally networked society runs on quid pro quos: People exchange details about themselves and their activities for services and products on the web or apps. Many are willing to accept the deals they are offered in return for sharing insight about their purchases, behaviors and social lives. At times, their personal information is collected by government on the grounds that there are benefits to public safety and security.

A majority of Americans are concerned about this collection and use of their data, according to a new report from Pew Research Center.

Here are 10 key takeaways from the report: 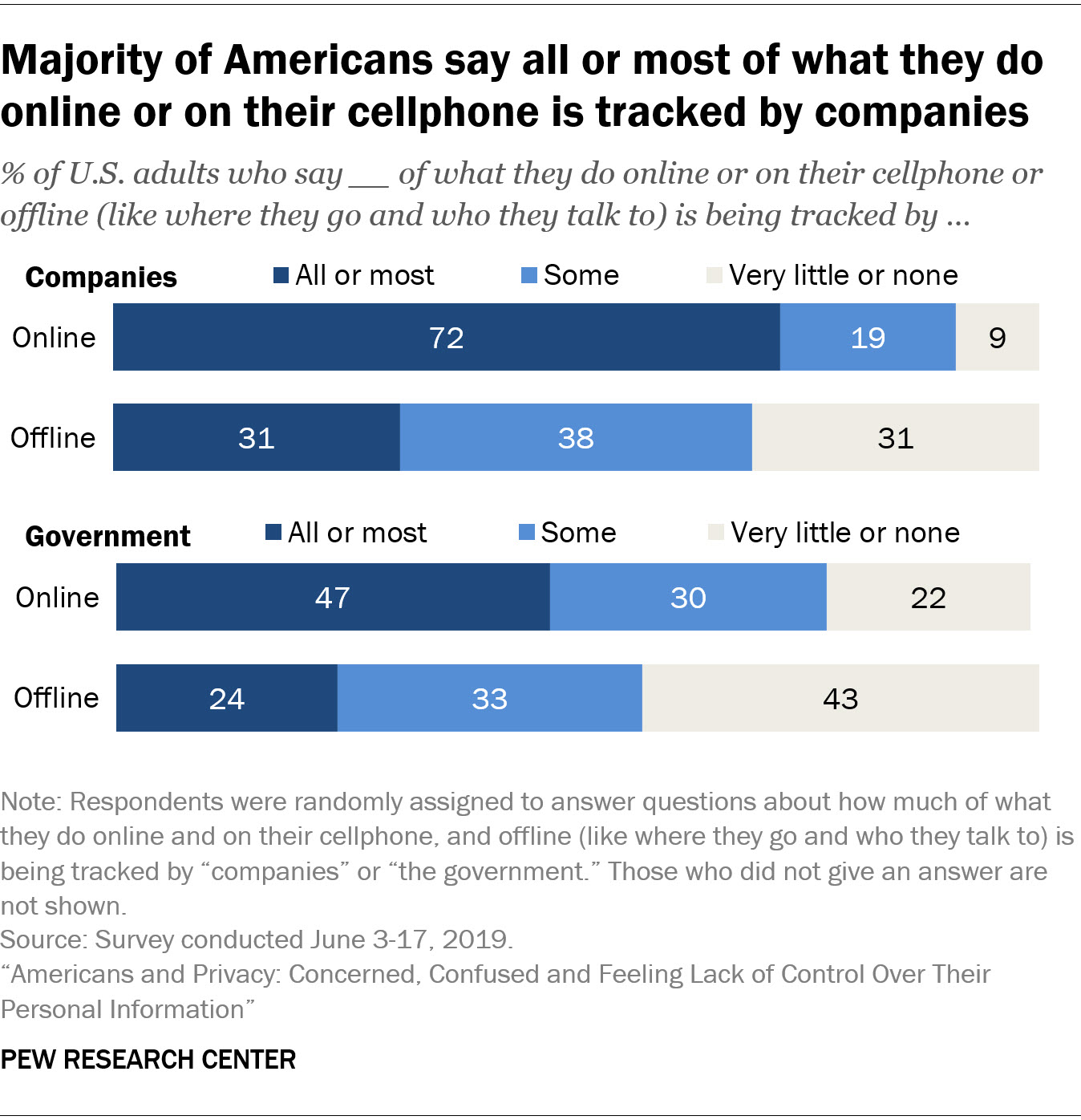 They are also more likely to believe companies track more of their activities (both online and off) than think that the government is collecting information on them. For example, the majority of Americans believe that all or most of what they do online and on their cellphone is being tracked by companies (72%), while just 47% think the same of the government. Smaller shares believe all or most of their offline activities (like where they go and who they talk to) are being tracked by companies (31%) and the government (24%).

6 Almost all Americans have been asked to agree to privacy policies, but fewer actually read them. Some 97% of U.S. adults have ever been asked to agree to company privacy policy, which includes 25% who say they are asked to do this almost daily. Yet only about 20% of Americans overall say they always (9%) or often (13%) read these policies before agreeing to them, and 36% say they never read them. Among those who say they ever read such policies, about one-in-five (22%) say they read privacy policies all the way through and that they are more likely to say they glance over these policies without reading them closely. 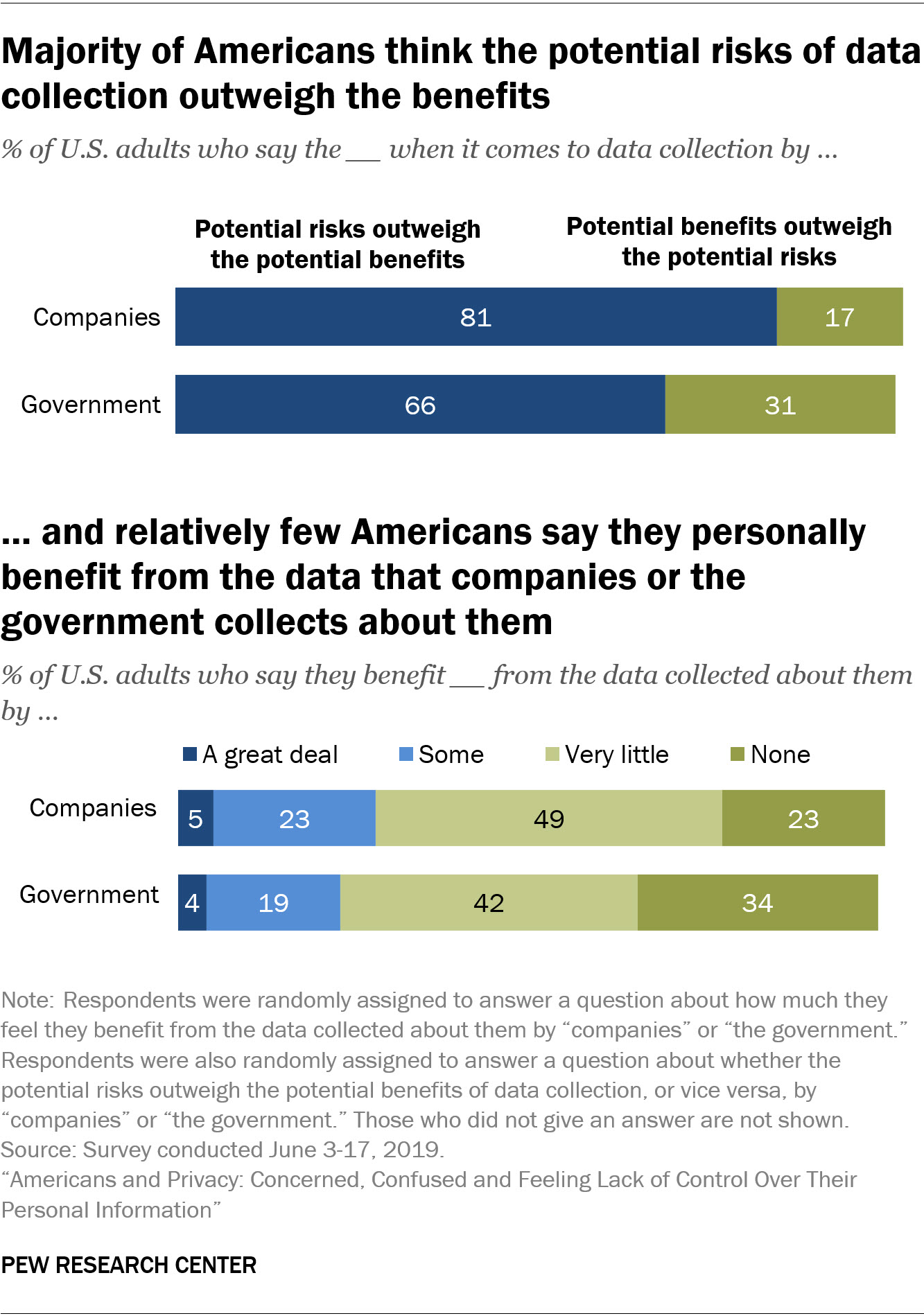 8 Americans vary in their attitudes toward data-sharing in the pursuit of public good. Though many Americans don’t think they benefit much from the collection of their data, and they find that the potential risks of this practice outweigh the benefits, there are some scenarios in which the public is more likely to accept the idea of data-sharing. In line with findings in a 2015 Center survey showing that some Americans are comfortable with trade-offs in sharing data, about half of U.S. adults (49%) say it is acceptable for the government to collect data about all Americans in order to assess potential terrorist threats. That compares with 31% who feel it is unacceptable to collect data about all Americans for that purpose. By contrast, just one-quarter say it is acceptable for smart speaker makers to share users’ audio recordings with law enforcement to help with criminal investigations, versus 49% who find that unacceptable. 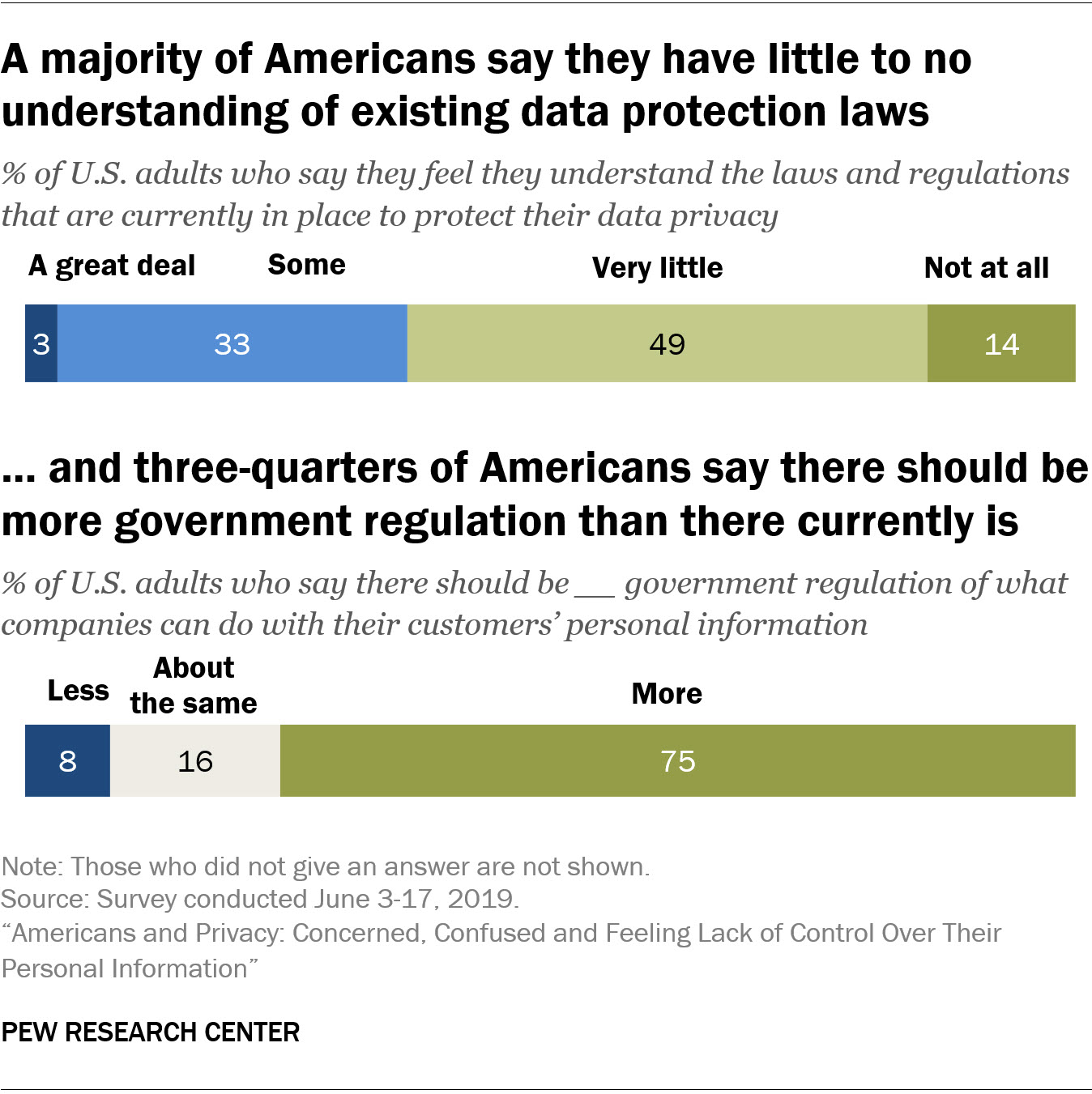 However, the majority of Americans support more government regulation in this area. Some 75% of U.S. adults say there should be more government regulation of what companies can do with customers’ personal information. These numbers echo figures from an earlier Pew Research Center phone survey from 2013, not based on the American Trends Panel, which found that 68% of internet users believed the current laws weren’t good enough at protecting people’s privacy online.

These findings come from a survey of 4,272 U.S. adults conducted on Pew Research Center’s American Trends Panel between June 3 and 17, 2019. It has an overall margin of error of plus or minus 1.87 percentage points.

CORRECTION (Nov. 9, 2021): A previous version of this post contained a hyperlink to an inaccurate external website. The link has been removed. None of the study findings or conclusions are affected.