This Veterans Day, Americans across the country will honor the service and sacrifice of U.S. military veterans. A recent Pew Research Center survey of veterans found that, for many who served in combat, their experiences strengthened them personally but also made the transition to civilian life difficult.

Here are key facts about veterans, drawn from that survey: 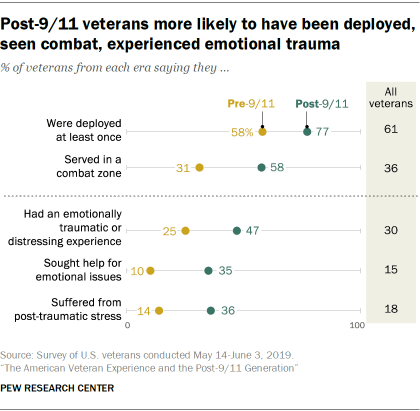 3 More veterans say the military did a good job preparing them for life in the service than it did in readying them for the transition to civilian life. 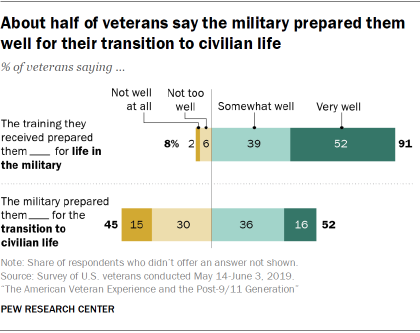 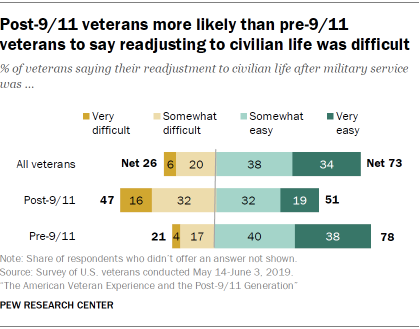 5 For many veterans, the imprints of war are felt beyond their tour of duty. The challenges some veterans face during the transition to civilian life can be financial, emotional and professional. 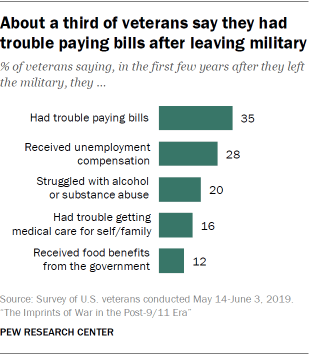 About a third of veterans (35%) say they had trouble paying their bills in their first few years after leaving the military, and roughly three-in-ten (28%) say they received unemployment compensation. One-in-five say they struggled with alcohol or substance abuse.

6 When it comes to employment, a majority of veterans say their military service was useful in giving them the skills and training they needed for a civilian job. About one-in-three veterans (29%) say it was very useful, and another 29% say it was fairly useful. There are significant differences by rank: While 78% of veterans who served as commissioned officers say their military service was useful, smaller shares of those who were noncommissioned officers (59%) or enlisted (54%) say the same.

Most post-9/11 veterans say having served in the military was an advantage when it came to finding their first post-military job – 35% say this helped a lot and 26% say it helped a little. Only about one-in-ten (9%) say having served in the military hurt their ability to get a job. Among veterans who looked for a job after leaving the military, 57% say they found one in less than six months, and an additional 21% say they had a job in less than a year.

7 Veterans give the VA mixed reviews. 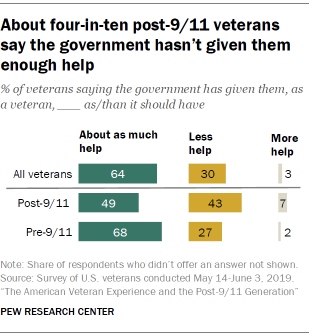 Most veterans (73%) say they have received benefits from the Department of Veterans Affairs. When asked to assess the job the VA is doing in meeting the needs of veterans, fewer than half (46%) of all veterans say the VA is doing an excellent or good job in this regard.

Views on U.S. military engagement in Syria are also more negative than positive. Among veterans, 42% say the campaign in Syria has been worth it, while 55% say it has not. (The survey was conducted entirely before President Donald Trump’s decision to remove U.S. troops from parts of Syria.)

9 A majority of Americans and veterans associate discipline and patriotism with veterans. Majorities among veterans (61%) and the general public (64%) say most Americans look up to people who have served in the military. And veterans see themselves as more disciplined (84%) and patriotic (71%) than those who have not served in the military. Most Americans agree with this: 67% of all adults say being disciplined better describes veterans than non-veterans, and 59% say the same about being patriotic.

About a third or more among veterans and the public say veterans are more hard-working than those who haven’t served. Still, when it comes to things like being tolerant and open to all groups, the public is less likely to see this as a trait associated with military service than veterans are themselves.