Three decades after the fall of the Berlin Wall, people in former West and East Germany overwhelmingly say the unification of their country was a positive development, according to a new Pew Research Center survey. Large majorities in both areas say the changes that have unfolded in Germany since 1989 have had a good influence on living standards, health care and national pride, and most also see improvements in areas including family values, spiritual values and law and order. 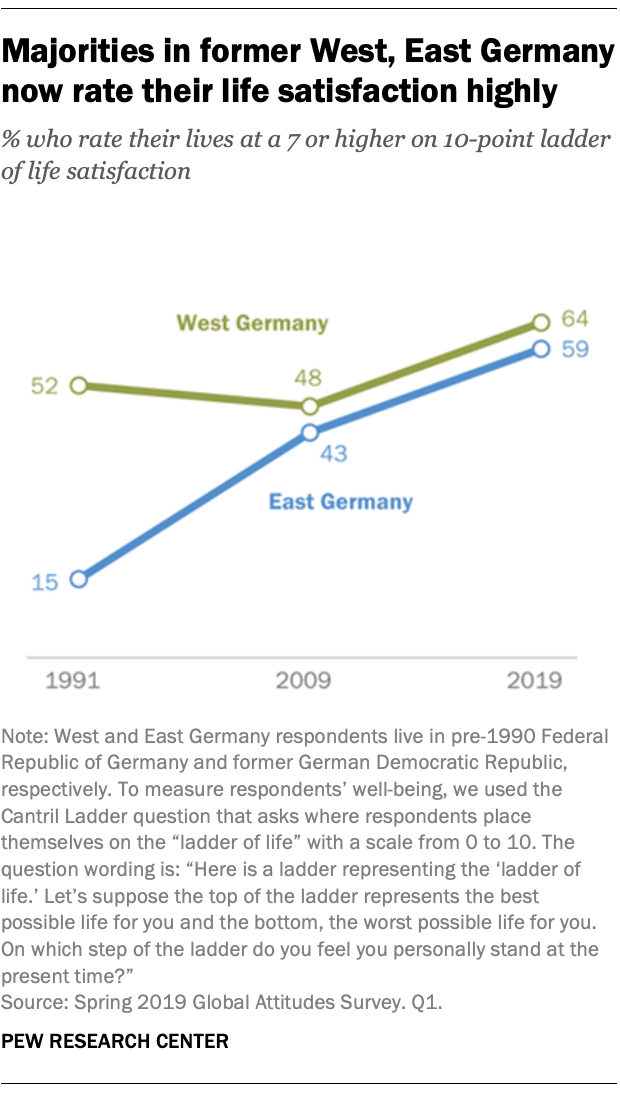 On a personal level, too, Germans are happier with their lives, according to the survey, which was conducted in spring 2019 among representative samples of adults in the pre-1990 Federal Republic of Germany (West Germany) and former German Democratic Republic (East Germany). Majorities in both areas now place themselves at 7 or higher on a 10-point “ladder” of life satisfaction, where 10 represents the best possible life. When Pew Research Center asked the life satisfaction question in 1991 and 2009, no more than roughly half in either area placed themselves in this top tier. The increase has been especially dramatic in the former East, where the share who rate their lives at 7 or higher has almost quadrupled from just 15% in 1991 to 59% this year.

Despite widespread positive sentiments among Germans about the changes of the past 30 years, the perspectives of those in the former West and East still differ in some notable ways. Here is a look at some of the areas where these differences are most pronounced. 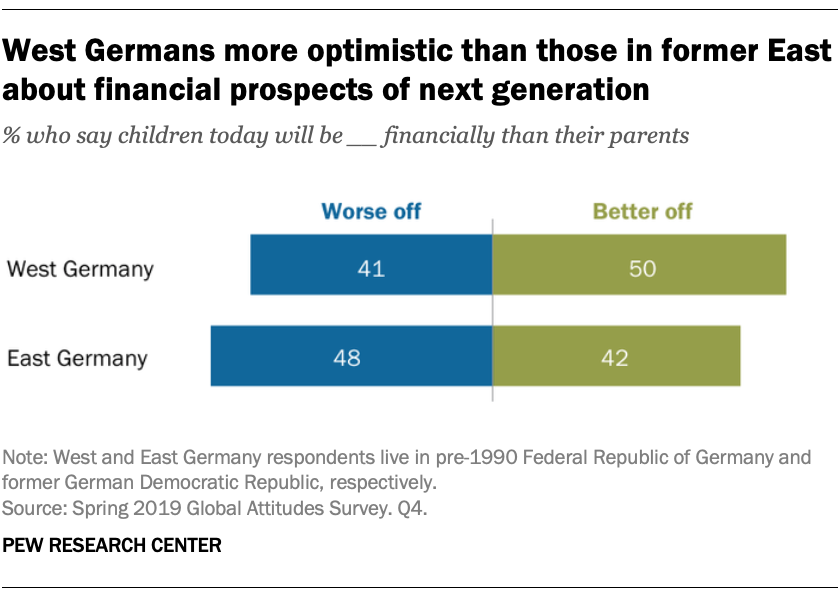 People in the former West are also more likely than those in the former East (50% vs. 42%) to say children today will be better off financially than their parents when they grow up. 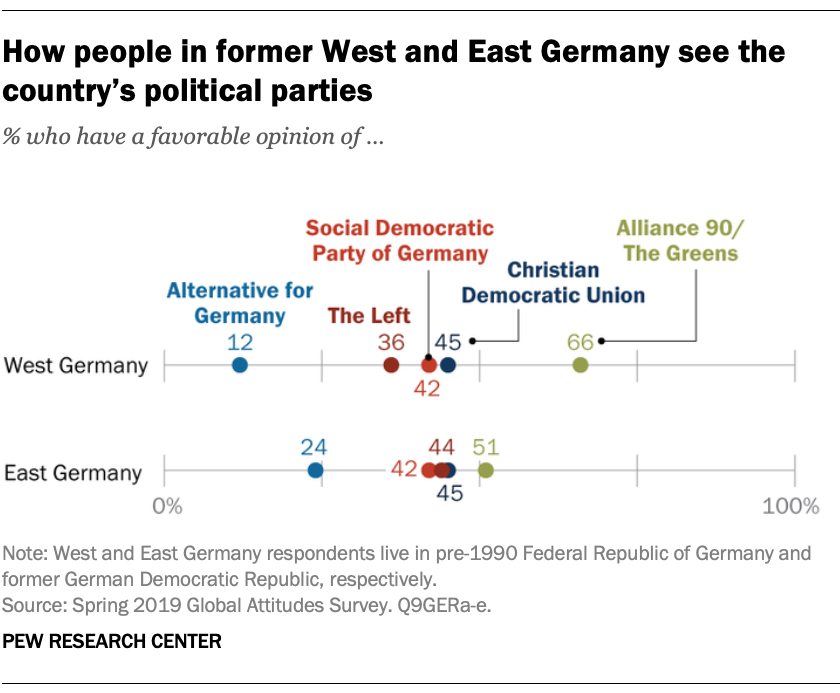 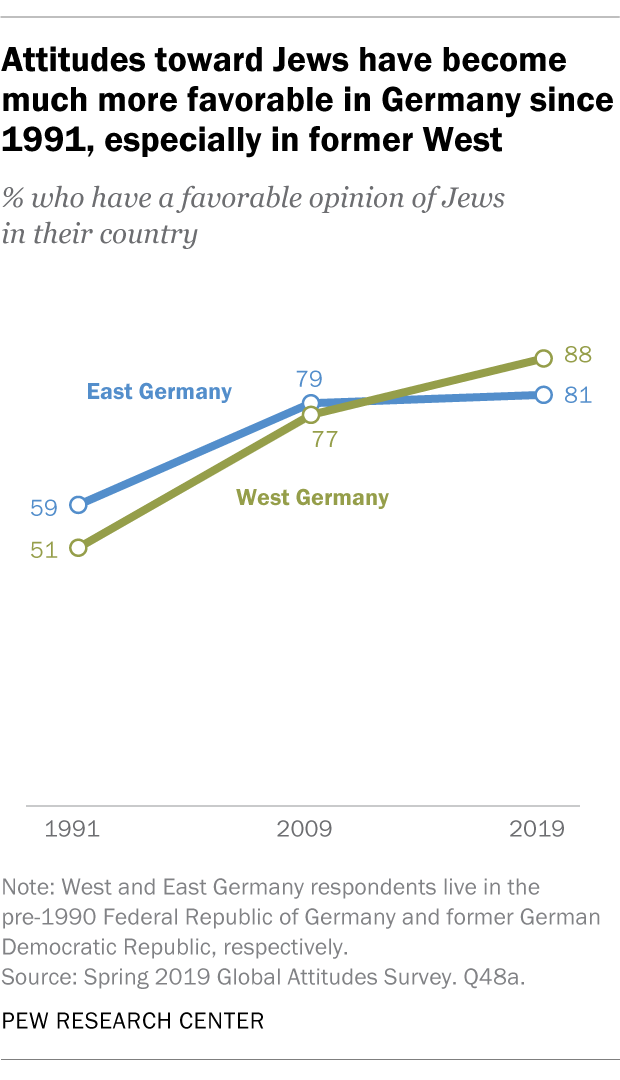 Those in former East Germany hold more negative views toward certain minority groups than people in the former West. Majorities in both areas see Muslims and Jews favorably, but those living in the former East are 14 percentage points more likely than their Western counterparts to have an unfavorable view of Muslims (36% vs. 22%) and about twice as likely to have an unfavorable view of Jews (12% vs. 5%).

Views of another minority group – Roma – are decidedly more negative in both areas, but people in the former East are again more likely than those in the former West to express an unfavorable opinion (48% vs. 35%).

Over the long term, there have been some notable changes in views toward minority groups in both areas. In 1991, for example, around a quarter of those living in former West Germany (27%) expressed an unfavorable view toward Jews – about twice the share expressing that view in the former East (12%). Since then, views toward Jews have become much more favorable in both areas – especially in former West Germany, where around nine-in-ten (88%) now hold a favorable opinion, up from around half (51%) in 1991. 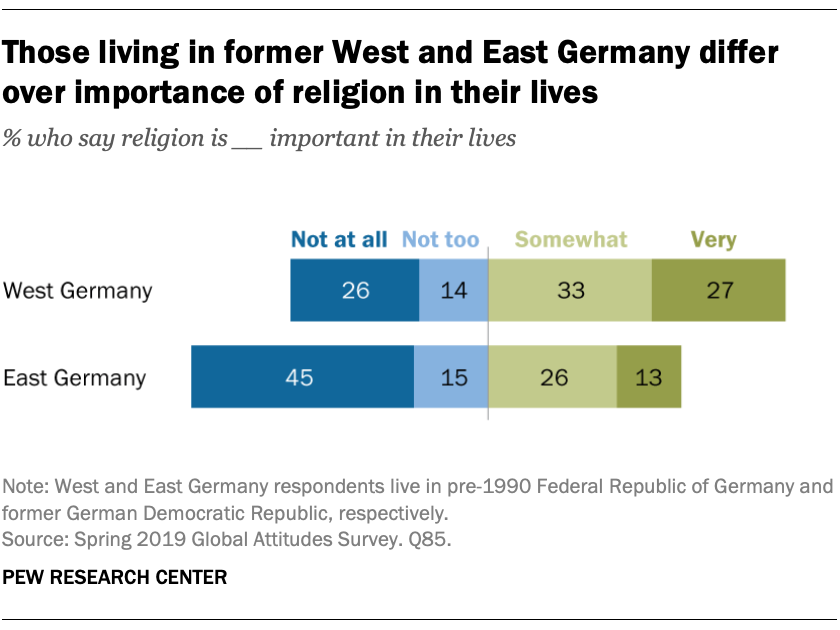 Correction (Nov. 5, 2019): A previous version of this post mischaracterized differences in the attitudes of people in the former West and East Germany about the financial prospects of the next generation.