The digital news industry in the United States is facing a complex future. On one hand, a steadily growing portion of Americans are getting news through the internet, many U.S. adults get news on social media, and employment at digital-native outlets has increased. On the other, digital news has not been immune to issues affecting the broader media environment, including layoffs, made-up news and public distrust.

As digital journalists gather for the Online News Association’s annual conference this week in New Orleans, here are some key findings about the way Americans get news online – as well as how digital newsrooms in the U.S. are faring, compiled from recent Pew Research Center surveys and analyses.

1The share of Americans who prefer to get their news online is growing. In 2018, 34% of U.S. adults said they preferred to get news online, whether through websites, apps or social media. That’s compared with 28% in 2016. (Television remains the most popular source of news, with 44% of Americans citing a preference for TV.) 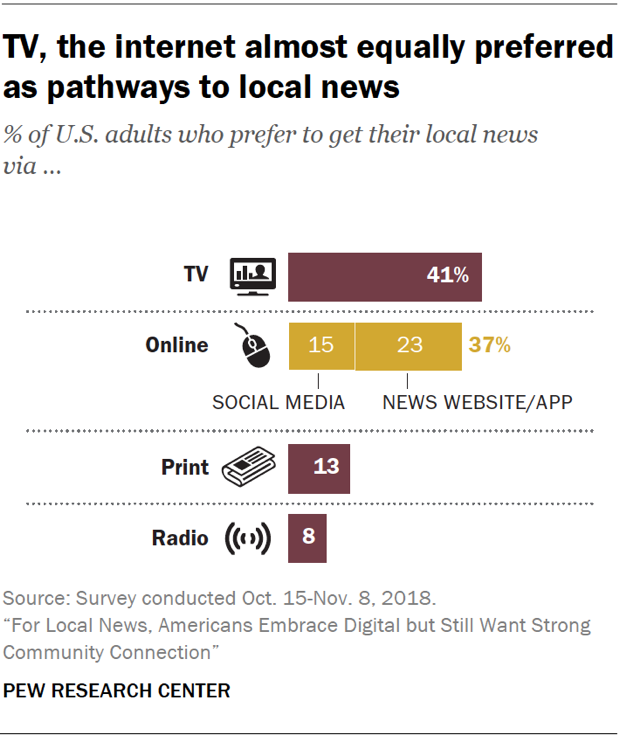 4Employment in digital newsrooms increased 82% between 2008 and 2018. The number of digital-native newsroom employees increased from about 7,400 to about 13,500 during this 10-year span. This increase of about 6,100 total jobs, however, fell far short of offsetting the loss of about 33,000 newspaper newsroom jobs during the same period. (Overall newsroom employment in the U.S. dropped by 25% from 2008 to 2018, a decrease driven by newspapers.) 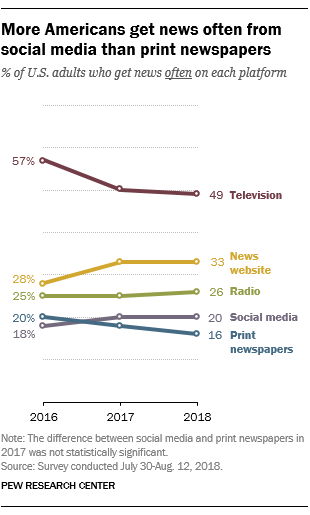 8Made-up news affects how people use social media. Half of Americans (52%) say they have changed the way they use social media because of the issue of made-up news. Furthermore, among the Americans who ever get news through social media, half have stopped following a news source because they thought it was posting made-up news and information. At the same time, about a third (31%) of social media news consumers say they at least sometimes click on news stories they think are made up.