This week marks the 50th anniversary of the Apollo 11 moon landing, which was the first time humans set foot on the moon. The United States remains the only country to have put people on the moon, and, as of 2018, the large majority of Americans consider it essential that the U.S. continue to be a leader in space exploration. However, many Americans do not think future manned trips to the moon – or to Mars – should be a high priority for NASA. Instead, they put higher priority on other roles such as monitoring Earth’s climate or asteroids that could hit Earth.

1Most Americans think sending astronauts to Mars or the moon should be a lower priority for NASA – or say it should not be done at all. While a majority of Americans (58%) said in a 2018 survey that human astronauts are essential to the future of the U.S. space program, less than one-in-five describe sending human astronauts to Mars (18%) or the moon (13%) as top priorities for NASA. Americans are more likely to rate these goals as “important but lower priorities” (45% and 42%, respectively), or to say they are not important or should not be done at all (37% and 44%).

NASA has not put a human on the surface of the moon since the Apollo 17 mission in 1972. But just last month, NASA announced plans to put the first woman on the moon in 2024 as part of the Artemis program. The program also aims to put human beings on the surface of Mars by the 2030s. 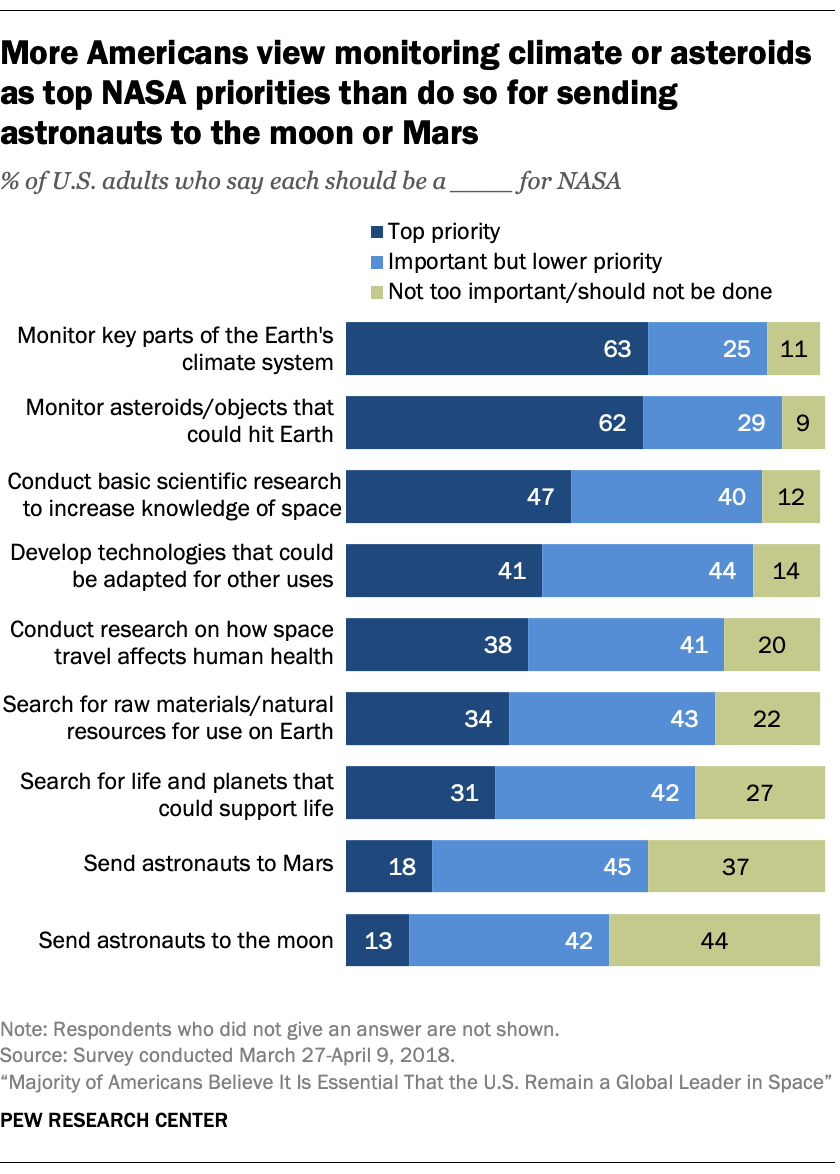 Americans see priorities other than a moon or Mars landing as more pressing for NASA. About six-in-ten (63%) say one of the organization’s top priorities should be using space to monitor key parts of Earth’s climate system. About four-in-ten or more said other top priorities should include conducting basic scientific research to increase knowledge of space (47%) and developing technologies that could be adapted for other uses (41%). 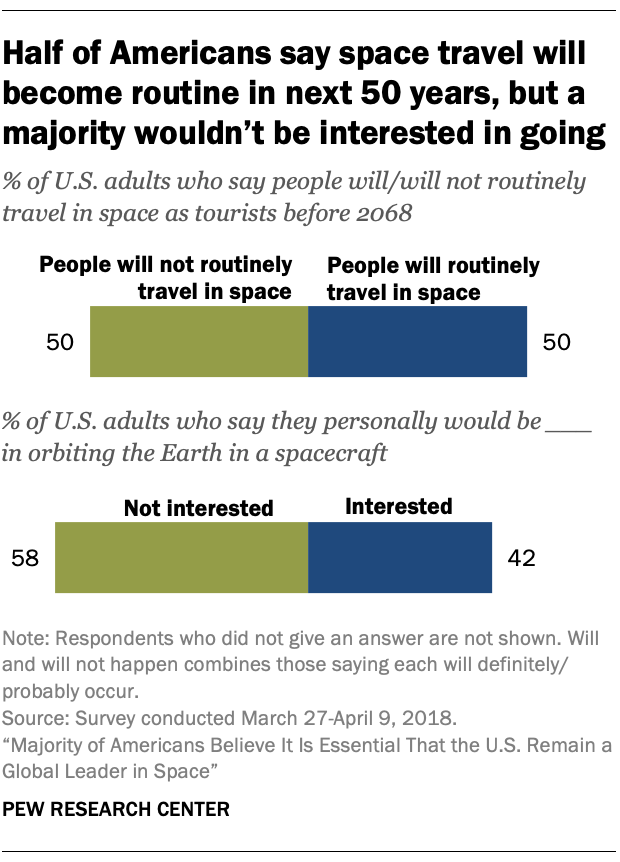 Half of Americans think space travel will become routine during the next 50 years of space exploration. Private companies like Virgin Galactic and SpaceX have plans to take tourists on suborbital space flights in the future. NASA also recently announced that it would open the International Space Station up for tourists. For now, these trips will be prohibitively expensive for the average person – for example, Virgin Galactic’s tickets cost about $250,000, and NASA estimates one trip to the space station would cost about $58 million. Still, half of Americans expect space travel to become routine by 2068.

However, even if space travel does become commonplace, more than half of Americans (58%) say they would not be interested in going. People who aren’t interested in orbiting the Earth in a spacecraft cite a number of concerns, including thinking it would be too expensive or scary or that their health or age would not allow for safe travel. Among the 42% who would be interested, the most common reason is that they want to experience something unique. 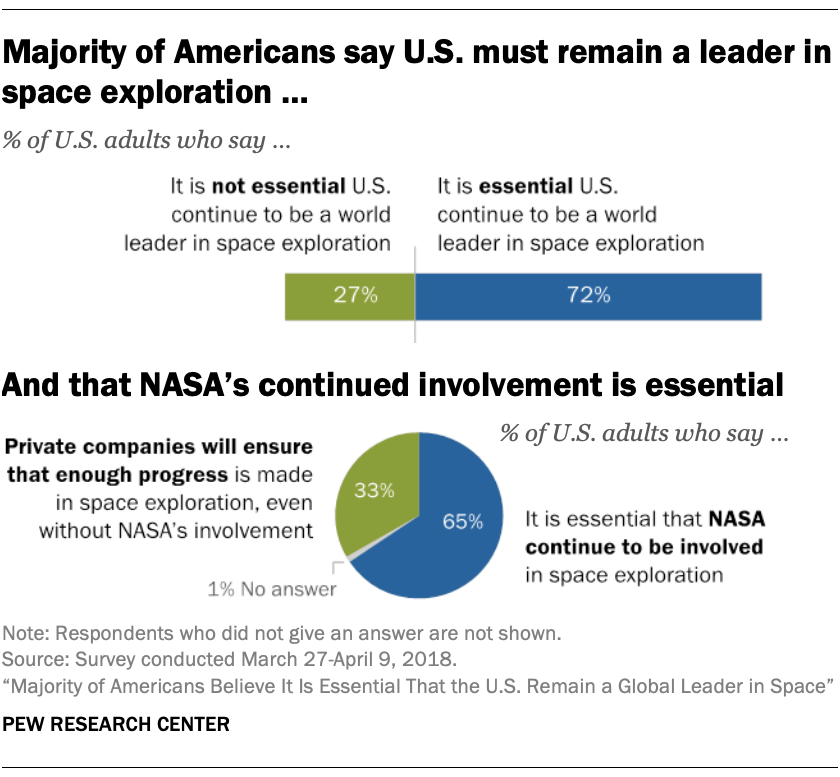 A majority of Americans say the U.S. must remain a global leader in space exploration, and that NASA’s continued involvement is essential. The large majority of Americans (72%) say it is essential that the U.S. continue to be a world leader in space exploration; just 27% say it is not essential. This sentiment is shared equally across generations and among Republicans and Democrats. 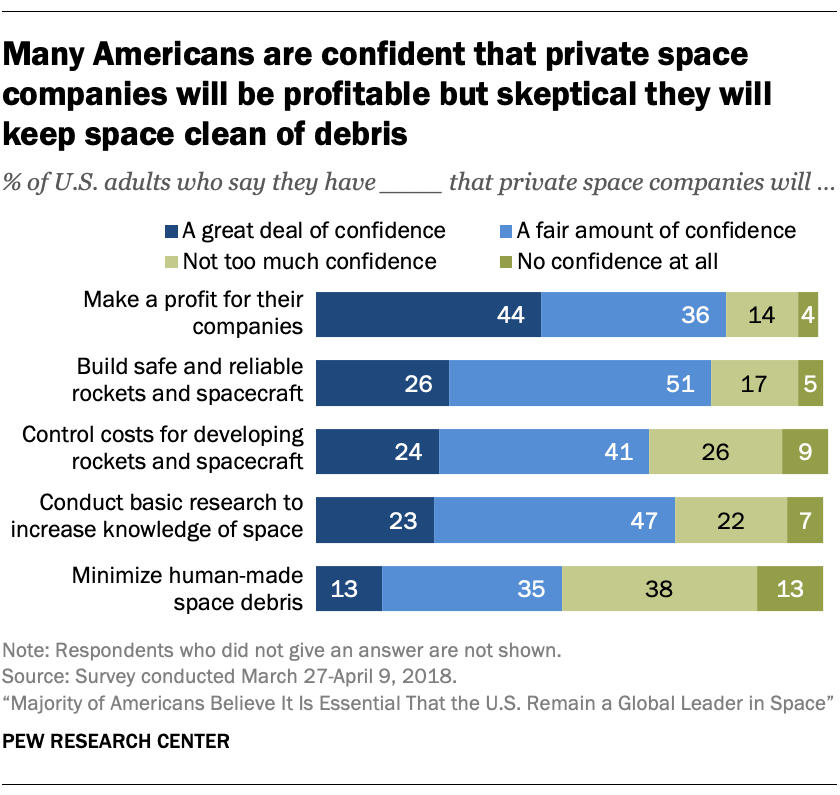 Space debris, sometimes called “space junk,” is a growing concern. NASA estimates that more than 23,000 pieces of space debris 10 centimeters or larger are orbiting the Earth, and these objects could damage important spacecraft like the International Space Station. 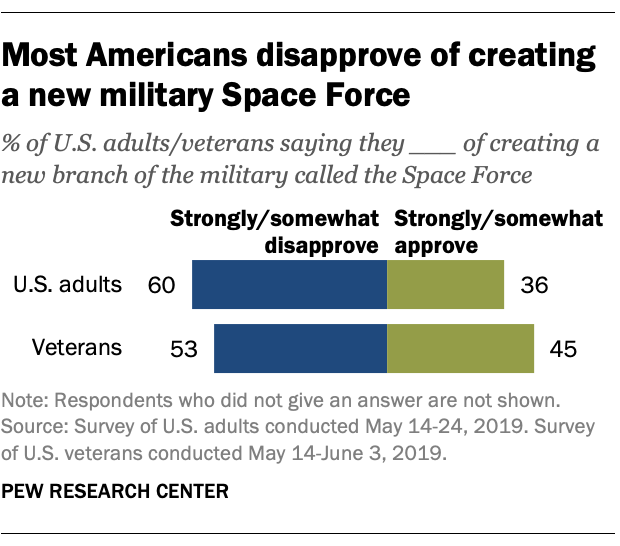 Americans are not enthusiastic about the idea of creating a military Space Force. The U.S. Department of Defense has long had satellites orbiting Earth, and the notion of a larger American military presence in space has been around since the 1960s. While President Donald Trump has talked about creating a Space Force as an entirely new branch of the military, most members of the public are not on-board with this plan: A May 2019 Pew Research Center survey found 36% of Americans approve of creating a military Space Force, while 60% disapprove. U.S. military veterans are more evenly split on this idea, but still more disapprove (53%) than approve (45%).