Church taxes are sometimes cited as one of a number of reasons for the decline in levels of religious commitment in Western Europe. Indeed, with mandatory church taxes linked to church membership and many Christians in the region already inclined to leave their faith, the added cost of the tax may be yet another incentive for people to step away.

But, in general, those countries that have a mandatory church tax aren’t any less religious than nations that don’t have such a tax, according to an analysis of a new Pew Research Center survey of Western Europe.

Among the 15 Western European countries we surveyed, six have mandatory taxes for members of the largest churches to help finance their activities – Austria, Denmark, Finland, Germany, Sweden and Switzerland. While most registered Christians (and in some countries, members of other religious groups) in these countries are required to pay the tax, they have the option of not paying by deregistering from their church.

To gain a better understanding of the way people’s attitudes about religion are connected to church taxes, Pew Research Center asked adults in these 15 countries a number of questions commonly used to measure religious commitment. These questions include whether they believe in God and identify with a religious group, as well as how often they pray and attend worship services.

The same basic pattern holds true for levels of religious observance. A minority of adults in church tax countries say they attend worship services monthly or more, with the highest shares in Austria (30%), Switzerland (29%) and Germany (24%). That’s roughly in line with the share of people who say this in countries without a church tax, with Ireland (37%), France (22%) and the UK (20%) topping that list.

Regardless of whether they are formally registered with a church, people in countries with a mandatory church tax are more likely to self-identify as Christian than are people in Western European countries that do not have any church tax system. In four of the six countries with a mandatory church tax – Austria, Finland, Switzerland and Germany – roughly seven-in-ten or more adults identify as Christians. By contrast, in only two of the six countries surveyed that do not have a church tax – the UK and Ireland – does the share of Christians exceed seven-in-ten. And across Western Europe, the country with the smallest share of Christians (the Netherlands, 41%) does not have a church tax. 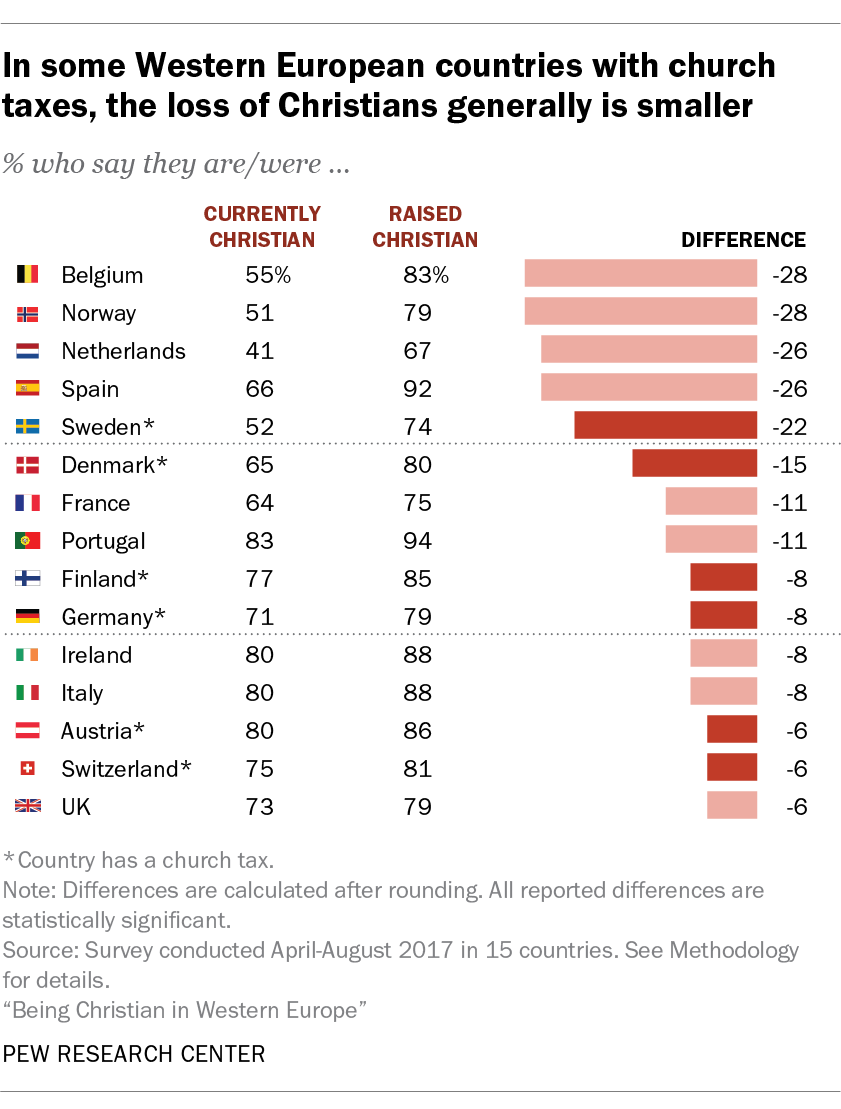