What is the internet? And who is an internet user? The questions may seem straightforward, but more than a decade of research in the United States and abroad suggests that some people who use the internet may not be aware that they’re doing so. Results from recent Pew Research Center surveys in the U.S. and 11 emerging economies show that confusion about what the internet is stems from two different – but related – sources.

First, many people who use smartphones are unaware that the apps and browsers on their devices involve using the internet. In the Center’s survey of emerging economies, as many as 38% of those who say they do not use the internet also indicate that they have a phone that connects to the internet. Due to differences in internet use across these countries, this group represents as much as 14% of the total adult population in South Africa, or as little as 3% in Venezuela.

These mismatches are often highest in developing countries and can even extend to people who use their smartphones to do things that necessitate using the internet for tasks such as looking for or applying for jobs.

Across 11 developing countries surveyed in fall 2018, one of the defining factors in people’s awareness they are using the internet is whether they have access to a home or office computer. Majorities of “unconscious internet users” (that is, those who say they do not use the internet, but do use social media, a smartphone or a feature phone) lack access to a home computer or tablet, meaning they likely visit the internet primarily through a mobile phone. In three countries, those with lower levels of education are also somewhat more likely to be unconscious internet users, though in most countries there is no relationship with educational attainment. But, while older people are somewhat less likely to use the internet, smartphones or social media than younger people, they are not more likely to be unconscious users.

This phenomenon extends to advanced economies as well: Previous surveys by the Center have found that a small share of people in nearly every country surveyed underreport internet use. Estimates that account for social media use and smartphone ownership tend to be somewhat larger than those that only include people’s self-reported internet use. For example, 90% of South Koreans say they use the internet, when asked, but 97% of South Koreans report using the internet, owning a smartphone or using social media – a gap of 7 percentage points.

Other developed countries also show gaps between these narrow and broad measures of internet use, including Spain (7 percentage points), Italy (5 points) and France (4). And in our most recent technology-focused survey of U.S. adults, conducted in January and February, one-quarter of those who say they do not use the internet do indicate they own a smartphone – although since relatively few Americans do not go online, that group works out to just 2% of the total adult population. 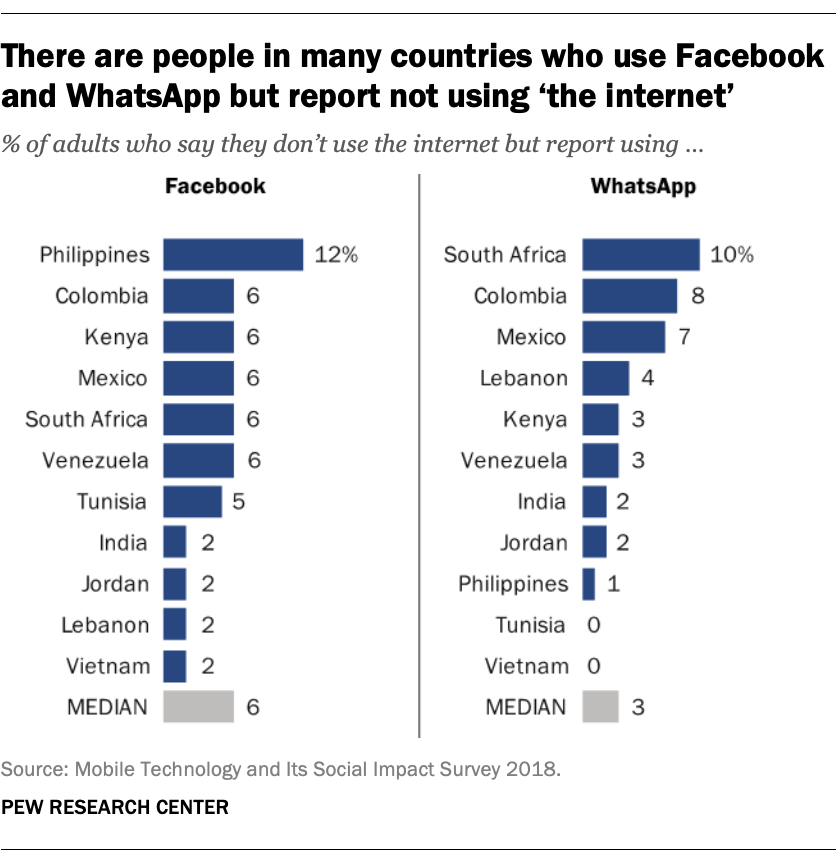 Second, apart from a lack of awareness that smartphones and feature phones connect to the internet, many people who use social media and messaging apps appear unaware that the platforms themselves are part of the broader internet. This is a relatively well-known phenomenon in the case of Facebook: Sheryl Sandberg, the company’s chief operating officer, was once quoted as saying, “People actually confuse Facebook and the internet in some places.” And in countries like the Philippines, Facebook offers a free version that allows users to visit the site without incurring mobile data charges.

Some of this may seem to be a niche issue, mostly of interest to survey researchers. But measurement matters for our understanding of political phenomena and how people access information. As many policies and programs are structured around reaching the population that is not online – “internet for all” – it’s important to have a clear and accurate reading of who is and is not online. Our research also suggests that the dominance of certain providers – especially Facebook and WhatsApp – is important to this understanding given that considerable shares in some countries appear to be using them without even realizing that they’re going online.

Focus groups conducted in the Philippines in March 2018 highlighted the extent to which people used Facebook as a portal to the internet at large, relying on it as a website for online dating, finding jobs and acquiring news, along with general uses like messaging, sharing pictures with family and video calls. As two participants highlighted in one exchange, “It seems like almost all people in the world have Facebook … it seems impossible if you don’t have [a Facebook account].” Indeed, the Philippines stands out for having the largest share of people among these 11 countries who say they use Facebook but also report not being online (12%). Similarly, as much as 10% of the population in South Africa reports using WhatsApp but not using the internet.

As was true with the distinction between smartphones and the internet, this lack of understanding of the nature of social media is not confined to emerging economies. Among U.S. adults who say they do not use the internet, some 14% indicate in each case that they use Facebook or the video sharing platform YouTube.

Taken together, these findings indicate that people can be unaware of what the internet is in a variety of ways. Across all 11 countries surveyed, anywhere from 5% to 25% of the population fits this pattern of being an unconscious internet user. The highest rates of this behavior occur in Kenya and the lowest rates occur in Lebanon and Vietnam. 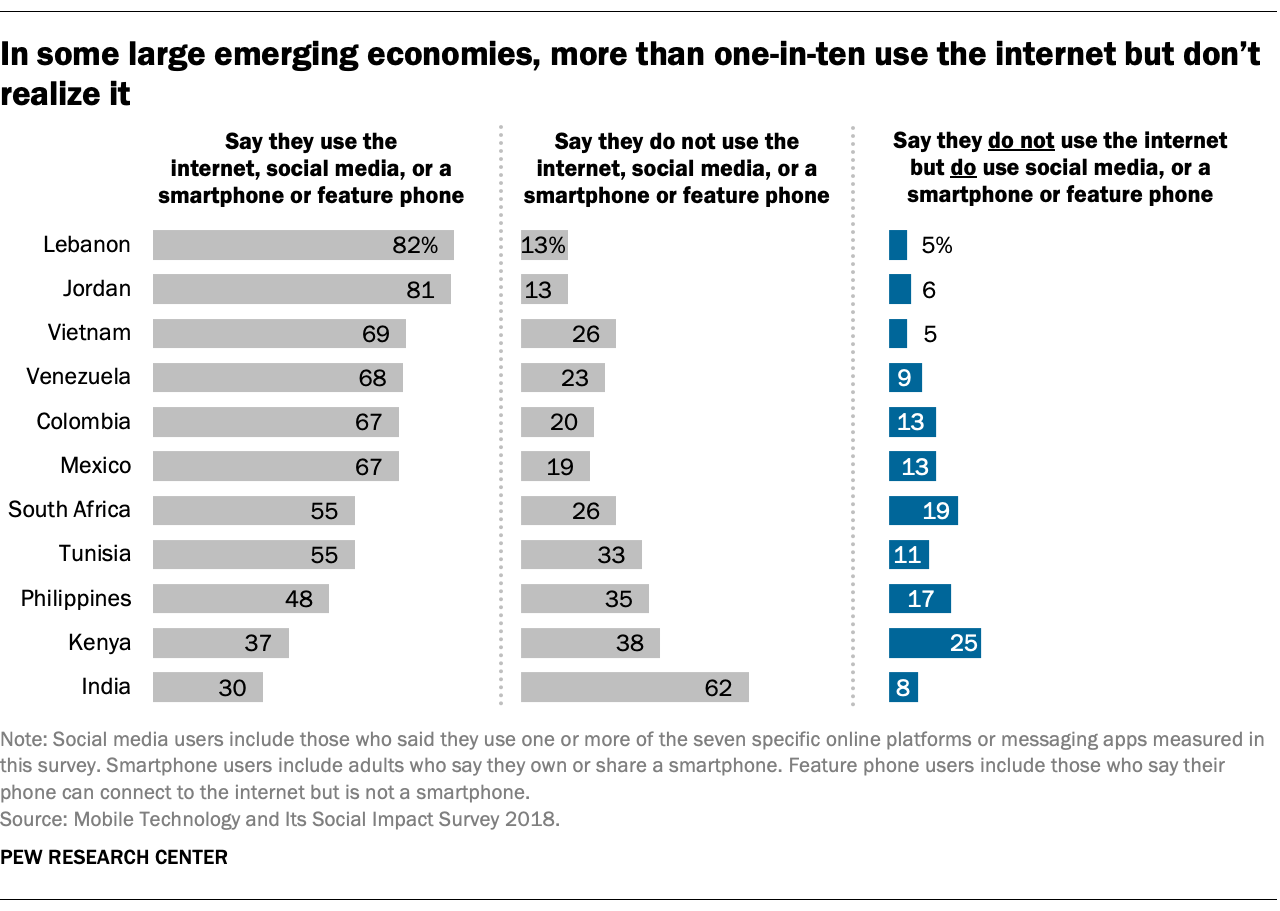