Smartphones and social media are now an almost universal feature of teenage life in the United States. More than nine-in-ten U.S. teens ages 13 to 17 say they have access to a smartphone or use social media, according to a 2018 Pew Research Center survey. But this increased connectivity can come with challenges for teens – as well as their parents. As part of our research into Americans’ digital lives, the Center also surveyed over 1,000 parents of teens to better understand their experiences with raising teens in the digital age. 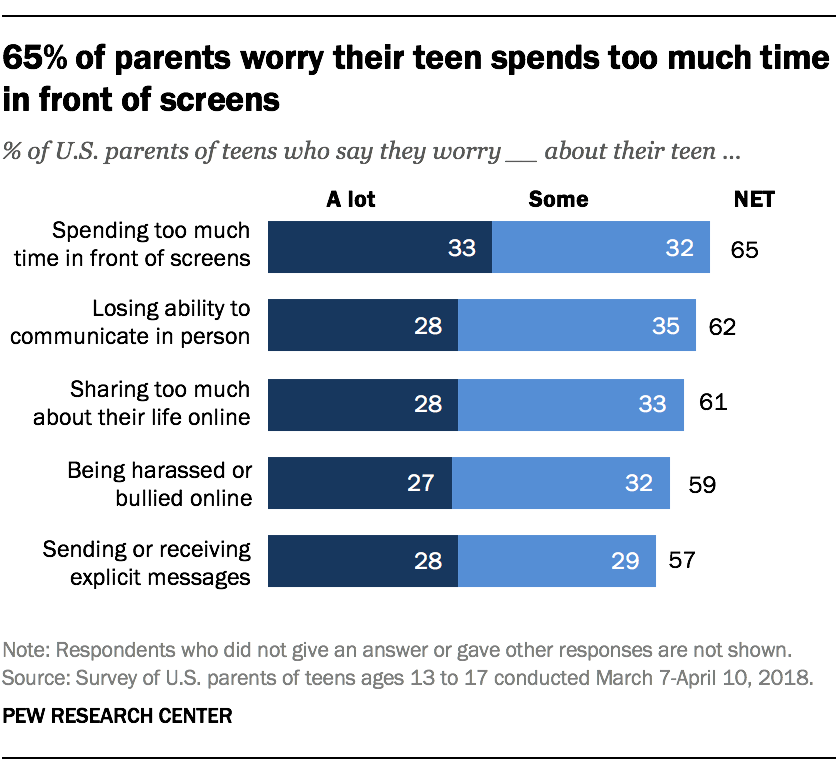 A majority of parents are concerned about the types of experiences their teen might encounter online. Roughly two-thirds of parents of teens (65%) say they worry at least some about their teen spending too much time in front of screens, including a third who worry a lot about this. Parents express comparable levels of concern about other potentially negative online experiences for their kids: About six-in-ten say they worry a lot or some about their teen losing the ability to have in-person conversations, sharing too much about themselves online, being bullied online or exchanging explicit messages. 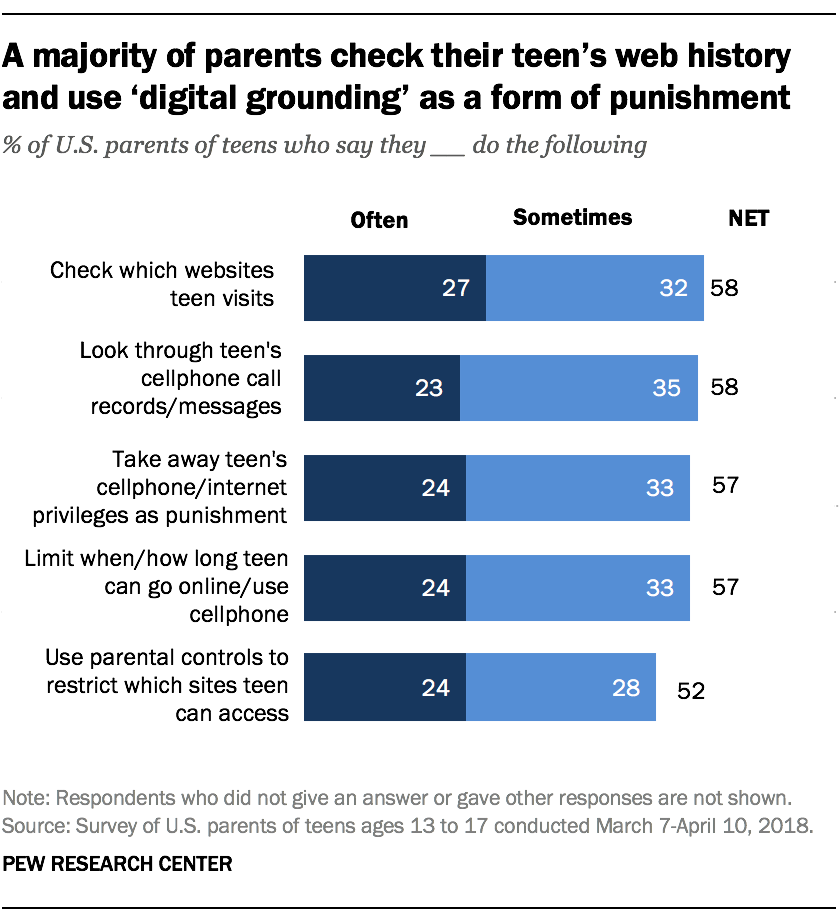 Today’s parents take a wide range of actions to monitor and police their teen’s online behavior. Nearly six-in-ten parents say they often or sometimes check which websites their teen visits or look through their child’s cellphone call logs or messages (58% of parents say they do each of these things). A somewhat smaller share of parents (52%) say they at least sometimes use parental controls to restrict which sites their teen can access.

Meanwhile, cutting off digital access is a potentially potent form of punishment for teens (particularly since 95% of those ages 13 to 17 now have access to a smartphone and 45% say they use the internet almost constantly). Around six-in-ten parents (57%) say they often or sometimes take away their teen’s cellphone or internet privileges as punishment. At the same time, it’s common for parents to limit their teens’ access to technology regardless of their child’s conduct: An identical share of parents (57%) report limiting the times of day or how often their teen can go online or use their cellphone.

3Parents of younger teens tend to take a more active role in monitoring their teen’s digital activities. Parents of teens ages 13 to 14 are significantly more likely than parents of older teens to monitor their teen’s digital activities or enforce screen time restrictions. For example, 72% of parents of 13- to 14-year-olds say they often or sometimes look at the messages and call logs on their teen’s cellphone, compared with 48% of parents of teens ages 15 to 17. A nearly identical pattern exists when parents are asked about setting screen time limits: 71% of parents of younger teens say they at least sometimes do this, compared with 47% of those who have an older teen. 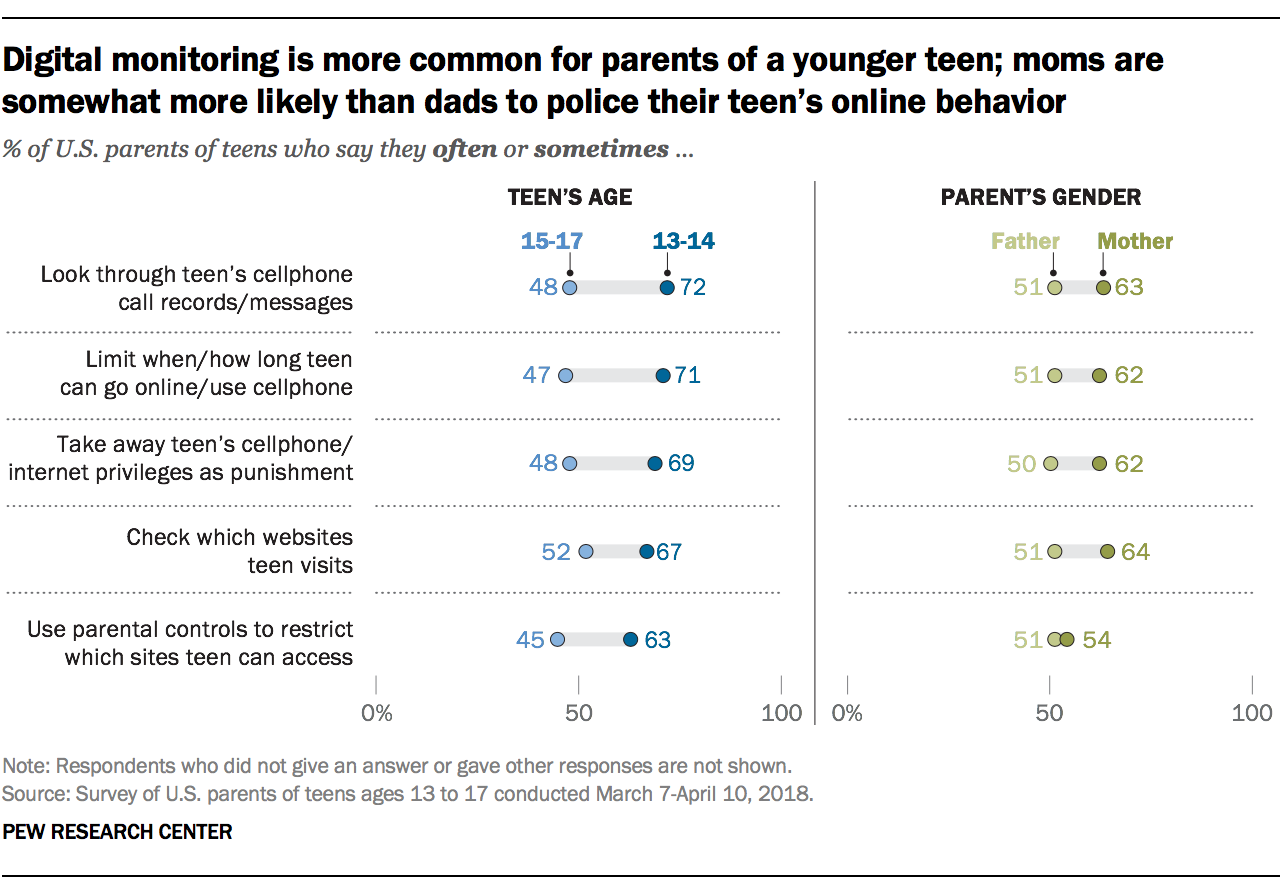 Additionally, mothers are somewhat more likely than fathers to regularly track what their teen does online or on their cellphone. About six-in-ten mothers of teens say they at least sometimes check their teen’s web history or cellphone records, set screen time limits or take away digital privileges as punishment, compared with about half of fathers who say they take these actions.

Although some have linked digital monitoring to more-affluent, highly educated parents, the Center’s data show little to no differences in the ways parents police online behavior by household income or educational attainment.

4Most parents are confident they can guide their teen to make good decisions, both online and offline. The vast majority of parents believe they are capable of monitoring and advising their child on a number of subjects. Roughly nine-in-ten parents say they are very or somewhat confident in their ability to teach their teen about appropriate online behavior (90%), to keep up with what their teen does or experiences online (87%), or to know how much screen time is appropriate for their child (86%). Parents express similar levels of confidence when asked how familiar they are with the types of professional skills their teen needs in order to appeal to colleges or employers, teaching their teen about appropriate conduct related to dating and sex, and guiding them on how to distinguish between accurate and inaccurate information. 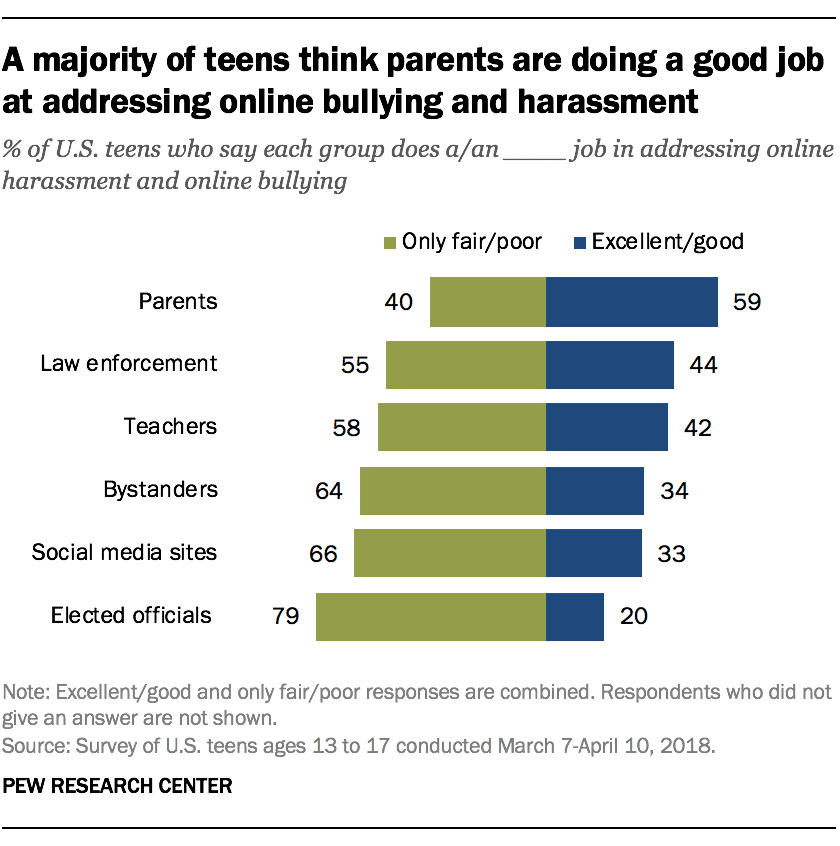 Parents generally get positive ratings from teens about their efforts to tackle online harassment and bullying. Roughly six-in-ten teens (59%) say parents are doing an excellent or good job at addressing cyberbullying – a notably positive assessment, considering how teens rate other groups measured in this survey. Teens are far less likely to rate the anti-bullying efforts of elected officials, social media companies and teachers positively. 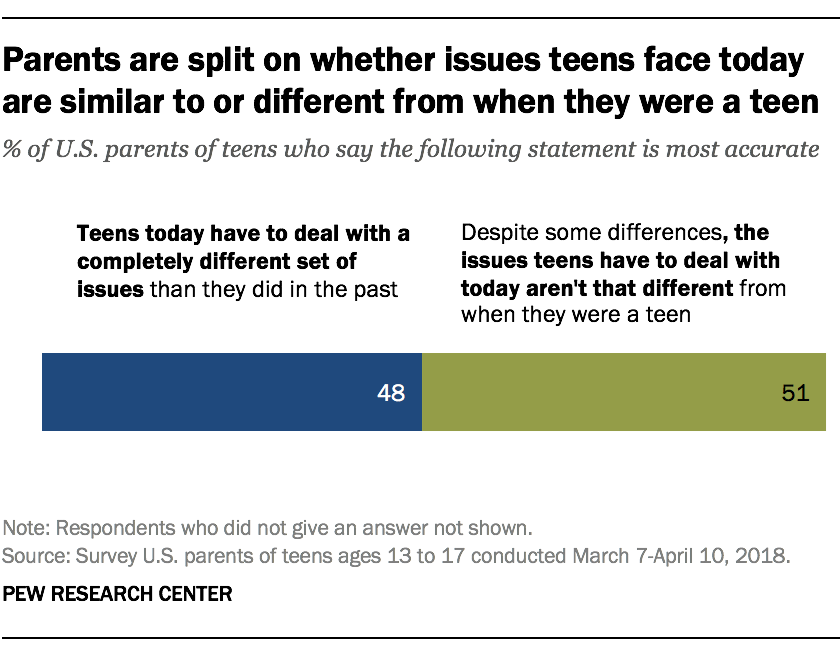 Parents are divided on whether today’s teens face a set of issues completely different from the issues of their youth. When asked to compare the experiences of today’s teens to their own experiences when they were a teen, 48% of parents say today’s teens have to deal with a completely different set of issues. A similar share of parents of teens (51%) believe that despite some differences, the issues young people deal with today are not that different from when they themselves were teenagers. 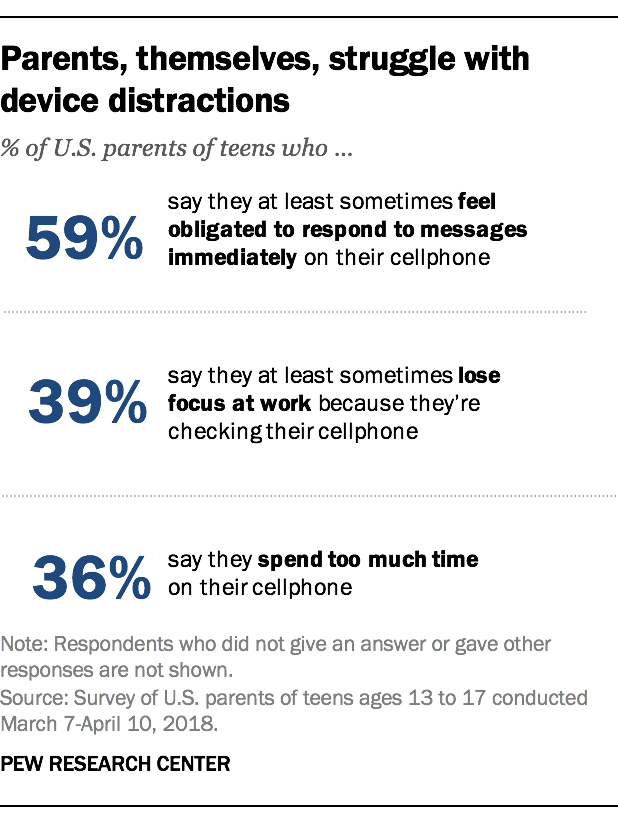 Device distractions aren’t unique to teenagers. Even as they worry about the amount of time their teen spends online, parents report their own challenges with screen time and hyper-connectedness. Roughly six-in-ten parents of teens (59%) say they at least sometimes feel obligated to respond to cellphone messages immediately, while 39% admit they regularly lose focus at work because they’re checking their mobile device and 36% say they spend too much time on their cellphone.