Updated data can be found here.

For a large majority of Americans, the country’s openness to people from around the world “is essential to who we are as a nation.” In a new Pew Research Center survey, 68% say America’s openness to foreigners is a defining characteristic of the nation, while just 26% say “if America is too open to people from all over the world, we risk losing our identity as a nation.”

The belief that openness to people from around the world is essential is widely shared across most demographic groups. However, Democrats and younger people are considerably more likely than others to hold this view, according to the national survey, conducted Sept. 18-24 among 1,754 adults.

Among Democrats and Democratic-leaning independents, an overwhelming share (85%) thinks America’s openness is essential to who we are as a nation. Republicans and Republican leaners are divided: 47% say America’s openness is essential, while 44% say being too open carries with it the risk of losing our identity as a nation. These views are virtually unchanged from the last time the Center asked this question in summer 2017.

Although majorities across age groups believe that openness to foreigners is essential to who we are as a nation, this view is more prevalent among younger people. Eight-in-ten adults younger than 30 say this (80%), compared with about six-in-ten (63%) of those ages 50 and older.

There are only modest racial and ethnic differences in these views: 65% of whites think America’s openness to foreigners is essential to who we are, and 73% of blacks and 70% of Hispanics share the same opinion.

Similarly, majorities across educational groups view America’s openness to foreigners in positive terms. Roughly three-quarters of adults with a college degree or more (76%) say that America’s openness is essential to who we are as a nation. A smaller majority of those without a bachelor’s degree (64%) say the same. 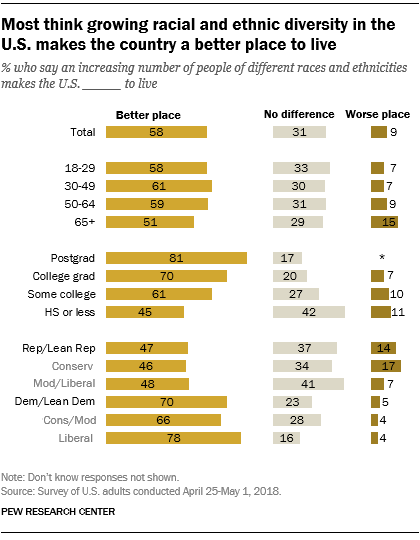 A survey from earlier this year found that a majority of Americans also see the nation’s racial and ethnic diversity positively. In May, 58% said an increasing number of people from different races, ethnic groups and nationalities in the U.S. made the country a better place to live, compared with 31% who said increasing diversity made no difference and 9% who said it made the U.S. a worse place to live.

In the earlier survey, partisan differences in opinions about diversity were similar to the current gaps in views of whether America being open to people from around the world is essential. Seven-in-ten Democrats and Democratic leaners (70%) said greater diversity made the U.S. a better place to live, compared with about half of Republicans and Republican leaners (47%).

Note: This is an update of a post by Samantha Neal, a former research assistant at Pew Research Center, originally published Aug. 4, 2017.