More than 11 million U.S. parents – or 18% – were not working outside the home in 2016, according to a new Pew Research Center analysis of U.S. Census Bureau data. 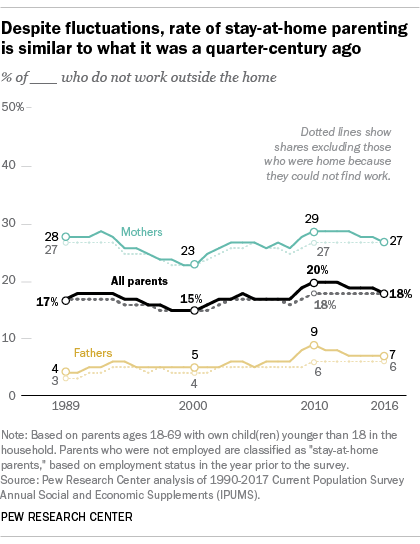 The stay-at-home share of U.S. parents was almost identical to what it was in 1989, but there has been a modest increase among fathers. The share of dads at home rose from 4% to 7%, while the share of moms staying at home remained largely unchanged – 27% in 2016 versus 28% about a quarter-century earlier. As a result, 17% of all stay-at-home parents in 2016 were fathers, up from 10% in 1989, the first year for which reliable data on fathers are available. 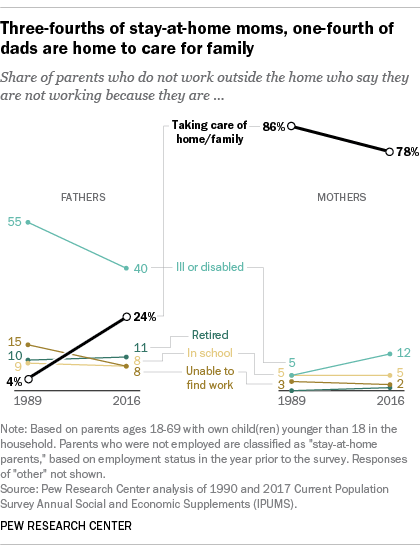 More stay-at-home dads among Millennials than among Gen X 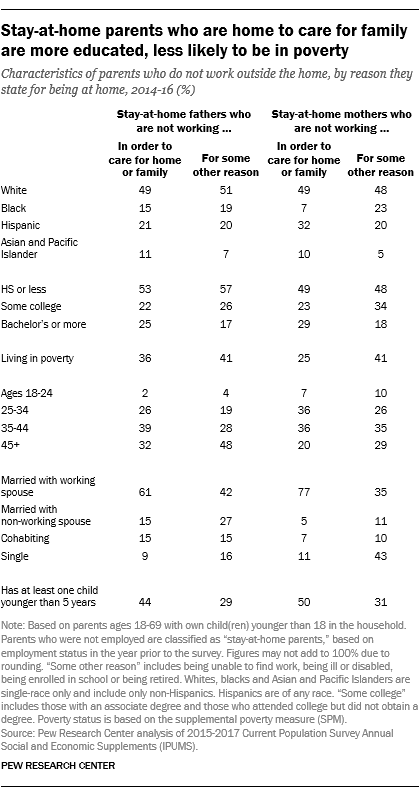 These patterns likely contribute to the fact that stay-at-home parents who are home primarily to care for their family are less likely to be living in poverty than other stay-at-home parents. This is particularly true of mothers: A quarter of those home to care for family are in poverty, compared with 41% of those home for other reasons. (By comparison, 8% of working dads and 9% of working moms are living in poverty.)

This analysis includes all parents ages 18 to 69 who report living with at least one of their own children (biological, step or adopted) younger than 18 years of age. Parents are categorized as “stay-at-home” based on their employment status during the year prior to the survey. This is generally similar to the approach adopted by the U.S. Census Bureau.

However, the Census Bureau limits the definition of stay-at-home parents to married people living with a child under the age of 15 who state that they were home for the entire year in order to care for home and family, as well as that they have an opposite-sex spouse who was in the labor force all year. The definition used here encompasses any parent of a child younger than 18 who has not worked for pay in the prior year, regardless of the reason, and regardless of their marital status or the employment status of their spouse or partner.