Just as it does today, the immigration issue drew an outpouring of tweets during the first month of Donald Trump’s presidency, when the executive order to restrict entry to the U.S. by people from certain countries was first issued.

But while a large number of Twitter users weighed in at least some of the time on this contentious issue by linking to news about it, the majority of content was driven by a smaller segment that tweeted about immigration news much more frequently, according to a new Pew Research Center analysis of tweets between Jan. 20 and Feb. 20, 2017. (Data are not available for recent events, but many of the actions and views that characterized the debate during the first month of Trump’s presidency are part of the current debate as well.)

When it came to sharing links about immigration, most users included at least one link to a news organization site, as opposed to a commentary, advocacy or other kind of site, the Center’s analysis finds. About eight-in-ten (83%) of the more than 2 million users who tweeted about immigration with a link during this time period shared at least one tweet that had a link to a news organization site. 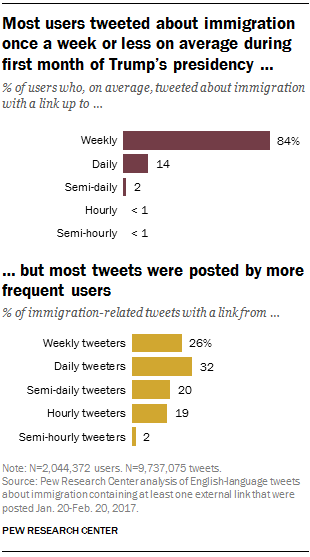 As a result, the large majority of users who tweeted weekly or less did not have a large impact on the overall volume of tweets about immigration that contained a link, producing only about a quarter of them (26%). Instead, the users who produced the most tweets were those who tweeted daily (32% of tweets). Semi-daily and hourly users each produced about one-in-five of them (20% and 19%, respectively). (These user types – also referred to as tweeters – are used throughout the rest of the post.)

Sites that primarily produce “made-up” news – that is, satire or misinformation – accounted for only a small share of the links shared in immigration-related tweets during the first month of Trump’s presidency. Just 2% of users ever shared links to sites found on any of three external lists of sites that produced “made-up” news, though in general, users who tweet about immigration with a link more frequently were more likely to have done so. (Sites that produced “made-up” news were collected from three organizations that track them – Politifact, BuzzFeed and FactCheck.org. For more information, see the methodology.)