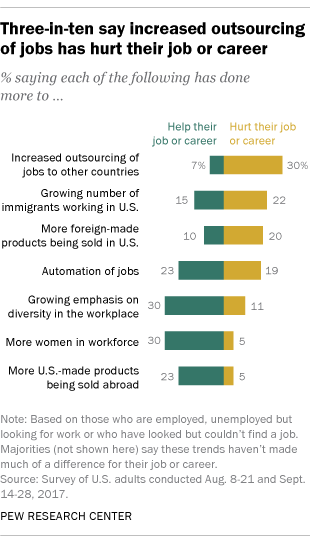 Among the trends reshaping the U.S. workplace, more Americans see outsourcing of jobs, more immigrant workers and imports as negative rather than positive forces when it comes to their livelihoods, according to a Pew Research Center survey conducted in August and September 2017.

But U.S. workers also see a bright side in some trends, with more Americans citing the growing emphasis on diversity, the increase of women in the workforce and more U.S.-made products being sold abroad as positive rather than negative. Views on the automation of jobs through new technology are divided.

Among Americans who are employed or have been looking for work, increased outsourcing of jobs to other countries tops the list of trends they say have hurt their job or career. Three-in-ten say this is the case, compared with roughly one-in-five (22%) who say the same about the growing number of immigrants working in the U.S. and 20% who blame a rise in imports. Overall, however, majorities say these factors haven’t made much difference in their job or career.

The extent to which these trends are seen as positive or negative varies by gender, race and ethnicity.

Men are more likely than women to say these three trends have hurt them personally. Some 36% of men point to outsourcing as having a detrimental effect on their job or career, compared with 24% of women. Men also are more likely than women to say the growing number of immigrant workers has harmed their careers (26% vs. 17%) and that having more foreign-made products sold in the U.S. has been a negative (24% vs. 15%).

Racial and ethnic differences emerge as well. For example, a quarter of whites and 21% of blacks say the growing number of immigrants has hurt their job or career, compared with just 11% of Hispanics. 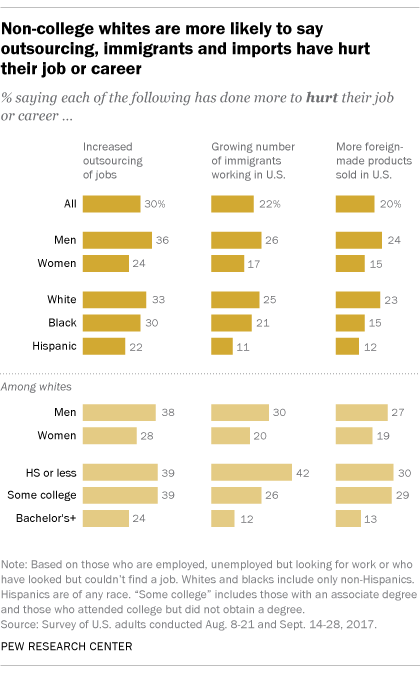 Among whites, those without a college degree are far more likely than those with more education to say that increased outsourcing of jobs to other countries (39% vs. 24%) and a rise in imports (30% vs. 13%) have hurt their job or career. When it comes to the impact of immigration, 42% of whites with no college experience say it has hurt them personally; 26% of those with some college and an even smaller share of white college graduates (12%) say the growing number of immigrants has hurt their job or career. (Educational differences among blacks and Hispanics cannot be analyzed due to small sample sizes.)

The views of those who see certain trends as harmful to them comes at a time when some workers – particularly those with less education – are struggling. The earnings disparity between those with and without a college degree has grown, and less-educated workers are more likely to see job prospects as bleak: 68% of adults with a high school diploma or less education say good jobs are difficult to find where they live, compared with 61% of those with some college experience and 53% of those with at least a bachelor’s degree. (For more on the changing landscape of the American workplace, see Pew Research Center’s 2016 report “The State of American Jobs.”)

The public has mixed views when it comes to the impact the automation of jobs has had on their own career. Some 23% of adults who are employed or have been looking for work say this trend has been helpful to them, while a similar share (19%) say it has hurt them. About six-in-ten (57%) say it hasn’t made any difference. These views are fairly consistent across gender lines, but differ somewhat by education: Those without a college degree view automation more negatively than their college-educated counterparts. 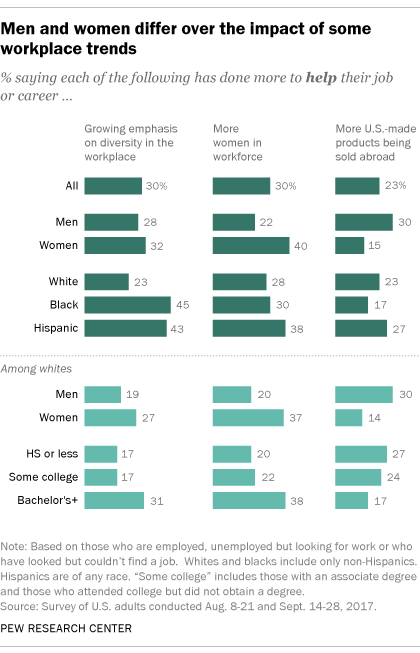 The views of men and women diverge when it comes to the impact of women’s rising labor force participation and the growth in exports. Women are more likely than men to see their rising presence in the workforce as helpful to them personally, while they are less likely to say having more U.S. products sold abroad has benefited them.

Among whites there is also a gender gap on views of workplace diversity: While 27% of white women say a growing emphasis on diversity has helped them in their job or career, only 19% of white men say the same. Similarly, 37% of white women, compared with 20% of white men, say women’s increased labor force participation has been beneficial for their own job or career. White women who are college graduates are particularly likely to see more women in the workforce as helpful: Half say this has had a positive impact on their job or career, while 27% of those without a college degree say the same.

When it comes to the growing emphasis on workplace diversity, blacks and Hispanics are about twice as likely as whites to say this has helped their job or career (45% and 43% respectively vs. 23%). Among whites, these views vary by education: 31% of white college graduates say this has helped them personally, compared with 17% of non-college whites.