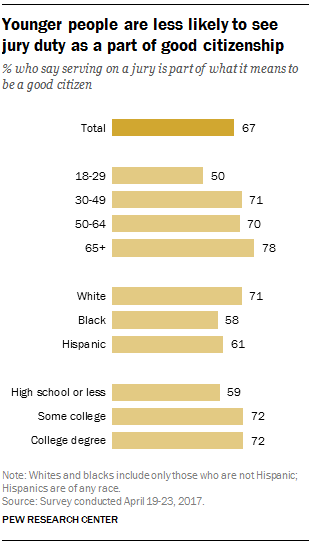 The chances of serving on a jury in any given year are small, but most Americans still see it as part of being a good citizen.

In an April Pew Research Center survey, two-thirds of U.S. adults (67%) said serving on a jury “is part of what it means to be a good citizen.” Just 31% took the opposite view and said jury duty service “does not have much to do with being a good citizen.”

Majorities in most demographic groups connect jury duty service with good citizenship, but younger people, racial and ethnic minorities and those without a college education are less likely to do so.

For example, only half of those ages 18 to 29 say jury service is part of being a good citizen, compared with seven-in-ten or more in older age groups. Blacks and Hispanics are less likely than whites to see jury duty as a part of good citizenship, as are those with a high school diploma or less when compared with people with at least some college education.

When it comes to the number of Americans who actually serve on a jury in a given year, recent statistics are hard to find. But the National Center for State Courts, an independent research organization focused on the state judiciary, has estimated that only about 15% of U.S. adults receive a jury summons each year, and fewer than 5% of those who are summoned end up on a jury. The center’s 2007 estimates are based on a survey of 1,546 counties, representing about 70% of the U.S. population at the time. 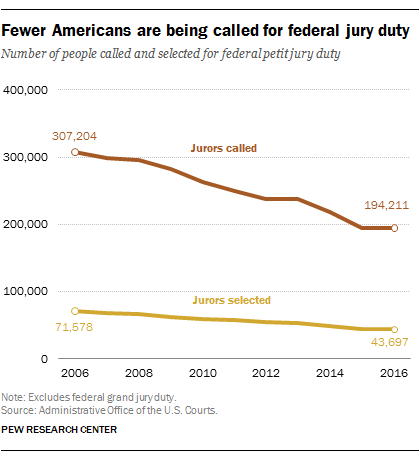 The Administrative Office of the U.S. Courts publishes its own statistics about federal jury duty, which is even rarer than state-level service because federal courts handle far fewer cases each year than state courts do. The federal statistics show a significant decline both in the number of people called to jury duty and in the number who are chosen. (The data count only petit, or trial, juries; they exclude grand juries.)