These are tense times for American Muslims. Majorities say that their religious group faces a lot of discrimination in the United States, that the media is unfair to Muslims and that other Americans do not view Islam as part of mainstream U.S. society. Nearly one-in-five (19%) say they have been called offensive names in the last year, and 6% say they have been physically threatened or attacked. 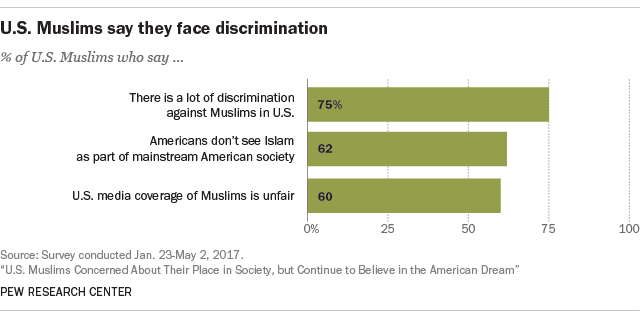 Yet for most American Muslims, these problems only partially define their personal experiences in the U.S. Four-in-five say they are satisfied with the way things are going in their lives, and 84% categorize Americans in general as “friendly” (55%) or “neutral” (30%) toward U.S. Muslims. About nine-in-ten (92%) say they are proud to be American.

The new survey indicates that the U.S. Muslim community is facing numerous challenges. Three-quarters (75%) of Muslim respondents, for example, say there is “a lot” of discrimination against Muslims in the U.S. (a view shared by 69% of Americans in general). Muslim women are more likely than Muslim men to hold this view (83% versus 68%). 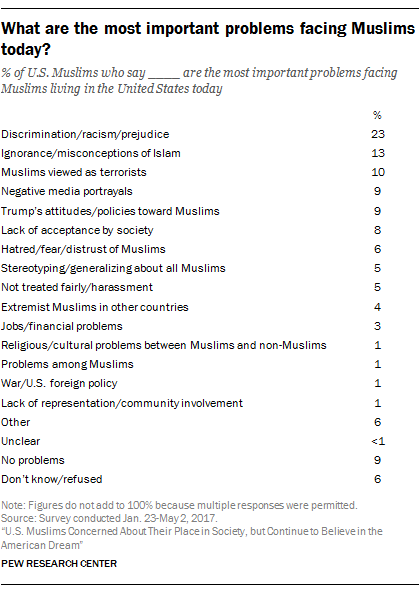 Asked to describe, in their own words, the most important problems facing Muslims today, 23% of U.S. Muslims mentioned discrimination, racism or prejudice. Meanwhile, 13% point to ignorance or misconceptions about Islam, 10% mention views of Muslims as terrorists, 9% mention negative media portrayals in general, and 9% mention President Donald Trump’s attitudes and/or policies toward Muslims. About one-in-ten (9%) identify no problems.

Muslims also were asked whether they had experienced specific types of discrimination over the previous 12 months. About one-third (32%) say that others have acted suspicious because they are Muslim, one-fifth say they had been called offensive names, and 18% say airport security had singled them out. One-in-ten (10%) say they had been singled out by other law enforcement officers and 6% say they have been physically threatened or attacked. Overall, 48% of respondents say at least one of these things happened to them in the 12 months prior to the survey, slightly higher than the 40% of respondents who said the same in 2007. Women (26%) are more likely than men (13%) in this year’s survey to say they have been called offensive names.

Along with their concerns, U.S. Muslims also report a host of positive feelings about life in the U.S. Even as most say that Americans do not view Islam as mainstream, for example, majorities of U.S. Muslims (60%) say they have “a lot” in common with most Americans, and that they can get ahead through hard work (70%) – a belief that is a key component of the so-called American dream. 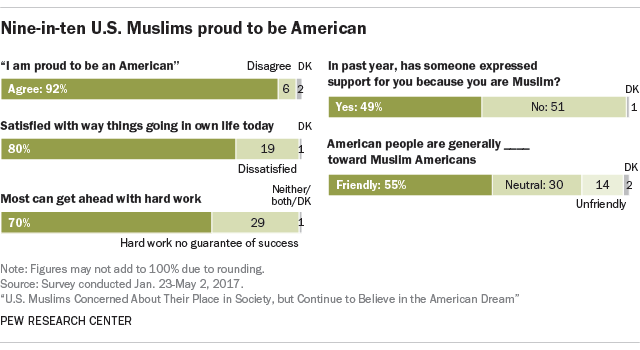 U.S. Muslims also appear to be more socially integrated with non-Muslims than they were a decade ago. About one-third (36%) of U.S. Muslims say that all or most of their friends are Muslim, down from 47% who said that in 2007. Many report positive interactions with non-Muslims by another measure, as well: 49% say that someone expressed support for them because they are Muslim in the 12 months prior to the survey, up from 32% who said this in 2007. 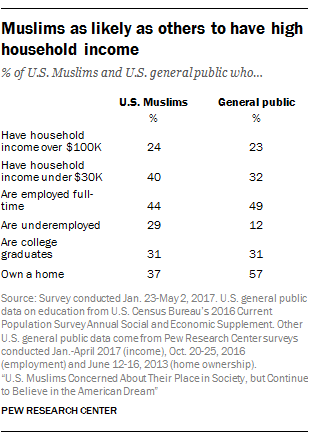 At the same time, they are considerably less likely (37%) than the general population to own a home (57%), and more likely (40%) than Americans in general (32%) to have annual household incomes under $30,000. They also are more likely (29%) than the general population (12%) to be underemployed, meaning that they are employed part-time, but would prefer full-time work, or they are unemployed but looking for work.

Muslim Americans: No Signs of Growth in Alienation or Support for Extremism
In many ways, Muslim men and women see life in America differently
Muslims and Islam: Key findings in the U.S. and around the world
Abercrombie hijab firing highlights Muslim concern about discrimination
U.S. Muslims see their relationship with Trump as strained