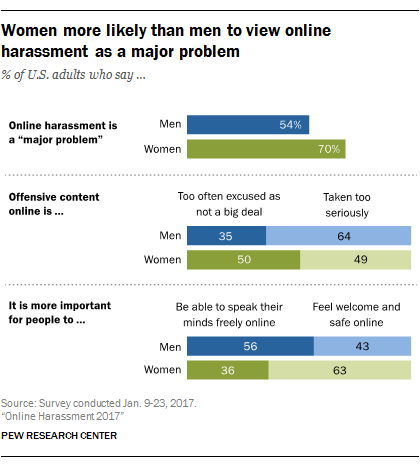 Several recent high-profile incidents have illustrated some of the more severe experiences many women face online, from insults hurled at female journalists to the release of private nude photos of female celebrities. A new Pew Research Center survey reveals that while men are somewhat more likely to experience any form of online harassment, women report higher levels of emotional stress from their experiences and differ in their attitudes toward the underlying causes of such incidents.

Overall, 41% of Americans have experienced online harassment, defined in the survey as offensive name-calling, purposeful embarrassment, physical threats, stalking, sexual harassment, or harassment over a sustained period of time. But the emotional impact of online harassment tends to be felt more acutely among women. For example, 35% of women who have experienced any form of online harassment say they found their most recent incident to be “extremely” or “very” upsetting, more than twice the share among men who have been targeted online (16%). (A similar split occurred in Pew Research Center’s 2014 survey on the topic. At that time, 38% of women and 17% of men who had been targeted online felt this level of distress because of their harassment.)

In their own words: Gender and sexual harassment online

“Any woman who has an opinion online is bound to get men who through anonymity feel the need to threaten and assault them. I had a friend who got a stalker from posting a political Facebook post.”

“Usually men harassing or threatening females for posting any provocative pictures or an opinion different from his own.”

“Mostly on dating websites my friends have had experiences where once turned down, men threaten to beat and rape them, murder them, call them names, threaten to ruin their reputation, etc. I have never used a dating website because of what I have seen.”

“Someone shared explicit photos of a friend of mine without her consent.”

“Someone posted explicit pictures of me without my permission on a ‘revenge girlfriend’ website.”

Women are also much more likely than men to say people should be able to feel welcome and safe in online spaces (63% to 43%), while men are more likely than women to say it is important for people to be able to speak their minds freely online (56% to 36%). Similarly, half of women say that offensive content online is too often excused as not being a big deal, whereas 64% of men – and 73% of men ages 18 to 29 – say that many people take this type of content too seriously.

There are also differences in the types of experiences men and women have had online. Overall, 44% of men and 37% of women have faced some form of online harassment. Men are somewhat more likely than women to have been called offensive names online (30% vs. 23%) or to have received physical threats (12% vs. 8%). By contrast, women – and especially young women – receive sexualized forms of online abuse at much higher rates than men. Some 21% of women ages 18 to 29 have been sexually harassed online, a figure that is more than double that of men in the same age group (9%). Further, 53% of young women say that someone has sent them explicit images they did not ask for (compared with 37% of young men).

Overall, 11% of women have specifically been harassed because of their gender, compared with 5% of men.