India has a long history of migration. More than a century ago, large numbers of Indian migrants – many of them involuntary ones – moved to Africa, the Caribbean and within the Indian subcontinent itself. Some of the top destinations of Indian migrants in more recent decades include Persian Gulf countries, North America and Europe. Here are five facts about India and migration.

1India is the top source of international migrants, with one-in-twenty migrants worldwide born in India. As of 2015, 15.6 million people born in India were living in other countries. India has been among the world’s top origin countries of migrants since the United Nations started tracking migrant origins in 1990. The number of international Indian migrants has more than doubled over the past 25 years, growing about twice as fast as the world’s total migrant population.

(Use the interactive below to explore migration trends for India and other countries.) 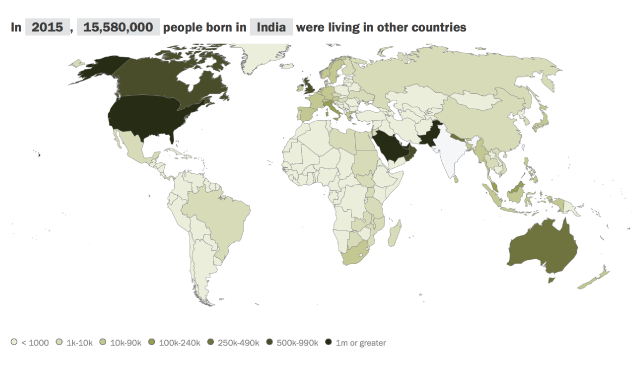 Nearly half of India’s migrants are in just three countries: the United Arab Emirates, Pakistan and the United States. About 3.5 million Indians live in the UAE, the top destination country for Indian migrants. Over the past two decades, millions of Indians have migrated there to find employment as laborers. Pakistan has the second-largest number of migrants, with 2 million.

2India is also one of the world’s top destinations for international migrants. As of 2015, about 5.2 million immigrants live in India, making it the 12th-largest immigrant population in the world. The overwhelming majority of India’s immigrants are from neighboring countries such as Bangladesh (3.2 million), Pakistan (1.1 million), Nepal (540,000) and Sri Lanka (160,000). 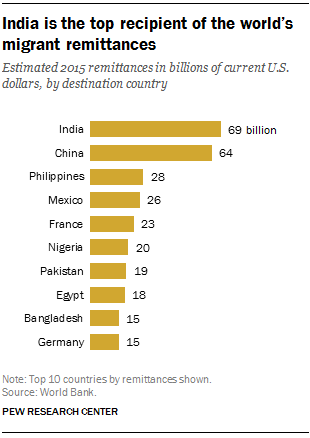 Consequently, it would take tens of millions more people to leave India before its emigration rate reached the world’s 3% average.

4India receives more remittances from migrants than any other country. About $69 billion was sent by Indian migrants to family and friends in India in 2015, amounting to roughly 3% of the country’s gross domestic product, according to the World Bank estimates. Most of the money comes from Indians living in Persian Gulf countries as well as the U.S., the UK and Canada. India has been the world’s top recipient of migrant remittances since 2008, when it overtook China on this measure. 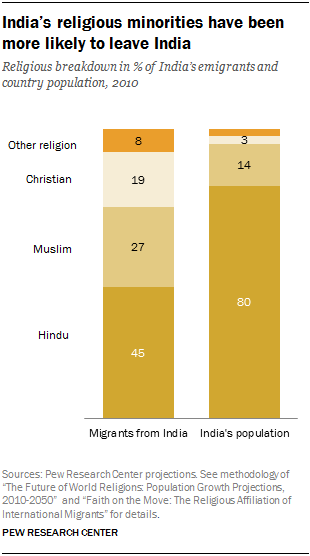