There are many divides among Americans when it comes to their views and practices about food, but one of the biggest is the generation gap in attitudes about organic produce and genetically modified foods. Younger adults are more likely than older adults to think organic foods are better for their health and to believe GM foods are worse. 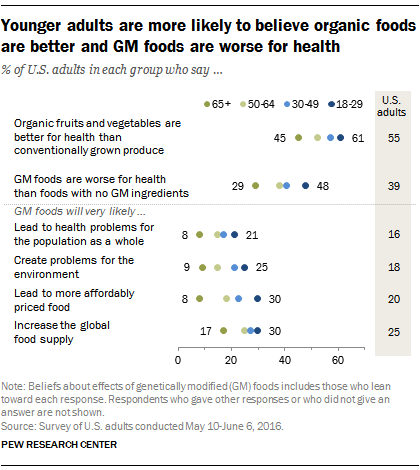 About six-in-ten U.S. adults younger than 30 (61%) say that organic produce is better for health than conventionally grown varieties, as do 57% of those ages 30 to 49. In contrast, 45% of seniors (those ages 65 and older) say organic produce is healthier, according to a new Pew Research Center survey. 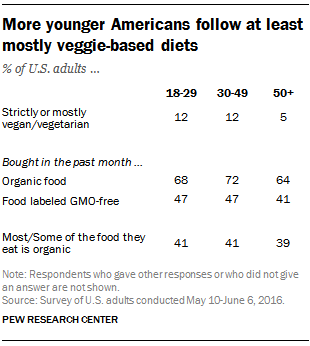 But in other ways, the buying and eating behaviors of younger adults appear similar to their older counterparts. Roughly similar shares of adults younger than 50 (71%) and older than 50 (64%) have bought organic foods at least once in the past month. And about four-in-ten of each age group say that most or some of what they eat is organic. Some 47% of those ages 18 to 49 say they have bought food that is labeled GMO-free in the past month, as do 41% of those 50 and older.