Sharing household chores is an important part of marriage for a majority of married adults. But among those who have children, there are notable differences in perceptions of who actually does more of the work around the house. 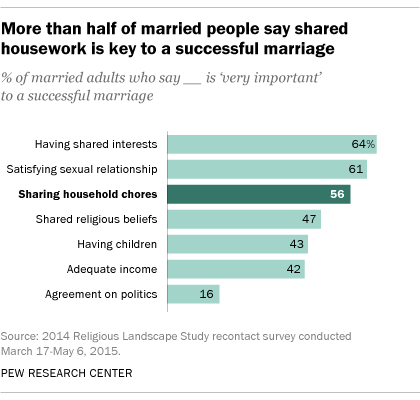 More than half of married U.S. adults (56%) – both with and without children – say sharing household chores is “very important” to a successful marriage, according to the most recent report from Pew Research Center’s Religious Landscape Study. That ranks behind having shared interests (64%) and a satisfying sexual relationship (61%), but ahead of having children (43%) and having adequate income (42%). 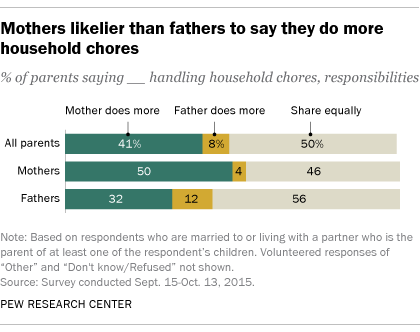 To be sure, even among couples where both partners work full time, the number of hours worked may differ significantly, and this could in turn influence how household chores are distributed. Previous research  indicates that, among full-time working parents, fathers work more hours, on average, than mothers do.

Perceptions about how chores are delegated differ significantly by gender. Fathers are more likely than mothers to say the chores are split about evenly between both partners in their household (56% vs. 46%). Fully half of mothers (50%) say they take up more responsibilities around the house than their partner, compared with just 12% of fathers who say they do more around the house. About one-third of fathers (32%) say their spouse or partner takes on more of the responsibility for chores in their household, compared with just 4% of mothers who say the father does more.

Shared religious beliefs in marriage important to some, but not all, married Americans
Key findings on marriage and cohabitation in the U.S.
8 facts about love and marriage in America
For American couples, gender gaps in sharing household responsibilities persist amid pandemic
White evangelicals more likely than other Christians to say people should prioritize marriage, procreation