About 3.9 million kindergarten through 12th-grade students in U.S. public and private schools in 2014 – or 7.3% of the total – were children of unauthorized immigrants, according to new Pew Research Center estimates based on government data. These estimates reflect an increase since the end of the Great Recession in 2009, when such students numbered 3.6 million and accounted for 6.6% of the total. 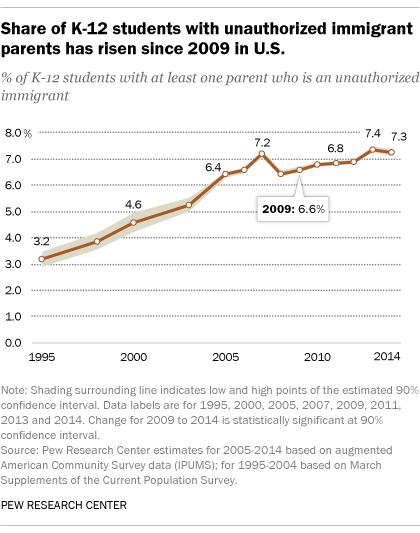 Before 2009, the trends had been similar, with both groups rising in number from 1995 to 2007 (the year the recession began), then declining to a lower level in 2008. The number of students with at least one unauthorized immigrant parent ticked up in 2009. (To learn more, see our interactive map.) 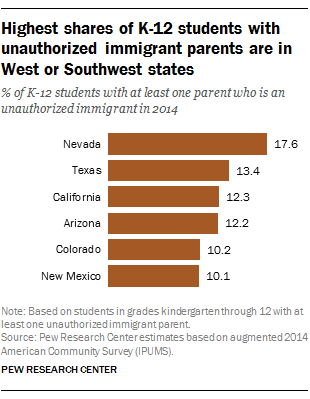 Pew Research Center estimates that in 2014, 4 million unauthorized immigrant adults, or 39% of the total, lived with their minor or adult U.S.-born children, compared with 2.1 million, or 30%, in 2000. (The total number of unauthorized immigrants with minor or adult children born in the U.S. may well be higher, as these figures do not count those who live separately from their children.)

Separately, the number of births to unauthorized immigrants has declined since 2009, according to other Pew Research Center estimates. There were about 275,000 births to unauthorized immigrants in 2014, compared with about 330,000 in 2009. However, this recent decline is not fully reflected in the Center’s school enrollment estimates because most of these children are not yet of school age.