With nearly 160,000 arrivals so far in 2016, Italy has received almost the same number of refugees as Greece this year, and by year’s end it may surpass Greece as Europe’s new focal point for refugee flows, according to recent statistics from the United Nations High Commissioner on Refugees. 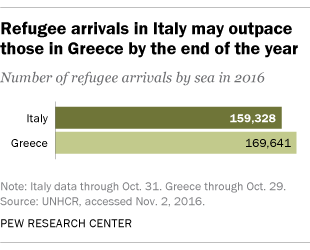 In contrast with Italy, Europe’s overall refugee flows are declining. More than 1 million refugees arrived on Europe’s shores via Mediterranean routes in 2015. Thus far, about 334,000 refugees, or a third of 2015’s number, have arrived in 2016.

One of the reasons the overall number of refugees to Europe is down is a March 2016 agreement between Turkey and the European Union that requires the return of any new asylum-seekers traveling from Turkey. Since the agreement, the number of Syrian refugees in neighboring Turkey has remained stable, and relatively few asylum-seekers from Syria have made the journey to Greece.

In 2016, the number of refugee arrivals in Italy held roughly steady compared with the previous year, but surged in October. And although fewer migrants typically travel in November and December, Italy could approach roughly 200,000 total refugee arrivals by the end of the calendar year if the October surge continues. 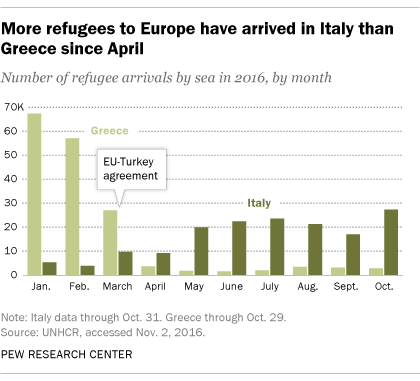 It remains to be seen how many refugees Italy will host in 2017. Due to financial constraints, Italian officials have said they may not house all newly arrived migrants in its refugee centers while their asylum applications are processed. In response, several border towns in France, Austria and Switzerland are securing their borders in fears that migrants will enter their countries from Italy.