Democrats and Republicans remain extraordinarily divided in their views of the Affordable Care Act – and over what Congress should do about it – at a time when the law has become a major issue in the closing stages of the race for the White House. 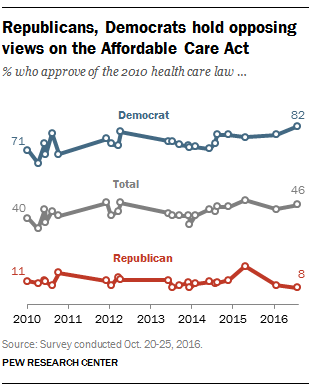 Partisans have long been sharply divided over the health care overhaul itself, but they are growing farther apart in their views over what should be done about the law. About two-thirds of Democrats (68%) now say Congress should expand the law, up from 50% in March 2012. Just 18% of Democrats now say Congress should keep the law as is, down from 31% four years ago. Among Republicans, 85% favor repeal, up from 74% in March 2012, while the share that supports keeping the law as is has declined from 10% then to 5% now.

The new survey was conducted Oct. 20-25 – a period that mostly predates an Oct. 24 announcement by the Department of Health and Human Services that insurance premiums under the law are expected to rise by an average of 22% next year. Republican presidential nominee Donald Trump has seized on the news, telling supporters in Florida this week that repealing the law “is one of the single most important reasons that we must win on Nov. 8.”

An overwhelming 94% of registered voters who support Trump disapprove of the Affordable Care Act. By contrast, about eight-in-ten supporters of Democrat Hillary Clinton (82%) approve of it. This represents one of the biggest areas of disagreement between supporters of the two candidates. 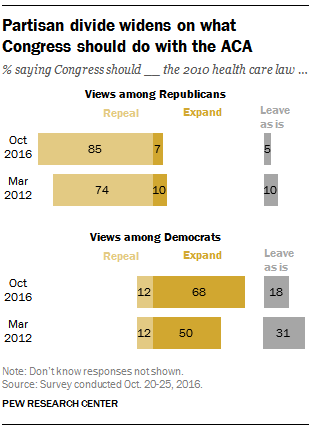 About seven-in-ten (69%) of those who support Clinton say Congress should expand the law, while 20% of her backers say Congress should leave it as is. But among Trump backers, 88% say Congress should repeal the law. These views are mostly in line with what each candidate has proposed: Clinton has promised to “defend and expand” the law while Trump has vowed to “repeal and replace” it.

Overall, views of the health care law are divided among the general public. The law has the approval of 46% of adults while 51% disapprove, little changed since April, when 44% approved and 54% disapproved. In July 2015 – shortly after the Supreme Court upheld the federal government’s ability to provide insurance subsidies via the federal exchanges established by the law – nearly equal shares approved (48%) and disapproved (49%) of the law.