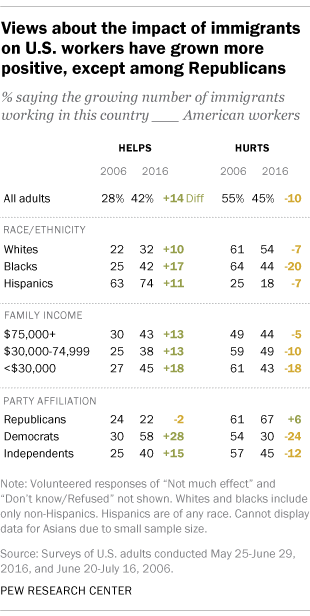 Americans’ views about the impact the growing number of immigrants working in the U.S. is having on American workers have softened notably over the past decade, according to a new Pew Research Center survey, conducted in association with the Markle Foundation.

The overall population is almost evenly split on whether growing numbers of immigrant workers help or hurt U.S. workers overall: 45% say having more immigrant workers hurts Americans and 42% say this trend helps U.S. workers. (The survey referred to immigrants in general and did not specify whether they were legally permitted or undocumented.)

These attitudes have changed significantly since a 2006 Pew Research Center survey, which found that 55% of Americans believed that the presence of more immigrant workers hurt U.S. laborers. That figure has since decreased by 10 percentage points.

Additionally, the share of Americans who thought a decade ago that the growing number of immigrants helped workers was 28%, marking a 14-point increase in that positive view.

There is a far wider partisan divide on this question – one that has been hotly debated during the 2016 campaign – than there was 10 years ago. The new poll shows that since 2006, Democrats have moved substantially in the direction of seeing immigrant workers as a plus when it comes to their effect on American worker: Today, about six-in-ten (58%) say that having more immigrant workers helps U.S. jobholders, up from just 30% who said this in 2006. Over the same time period, Republican opinion has shifted slightly in the opposite direction: Among adults who identify with the GOP, 54% now believe that the growing number of immigrant workers hurts American workers (a 6-point increase since 2006).

Other groups who have come to see immigrant workers more positively include those with less than a high school education, those in households earning less than $30,000 and blacks.

Overall, when Americans are asked what hurts American workers, the top answers are outsourcing jobs to other countries (80% of Americans think this hurts U.S. jobholders), more foreign-made products being sold in the U.S. (77% think this hurts), increased use of contract or temporary employees (57%), automation of jobs (50%) and the decline in union membership (49%).

While there are partisan differences over immigration in this election campaign, fairly strong majorities of Americans have positive views about immigrants, including those who are unauthorized.

The U.S. has 44 million immigrants, more than any other country, that together make up 13.6% of the U.S. population. Three-quarters of them are in the U.S. lawfully or hold U.S. citizenship. The remaining quarter are unauthorized immigrants. The latest estimates from Pew Research Center show that there were 11.1 million unauthorized immigrants in the country in 2014, a figure that has remained essentially stable since 2009.

Immigrants don’t make up a majority of workers in any U.S. industry