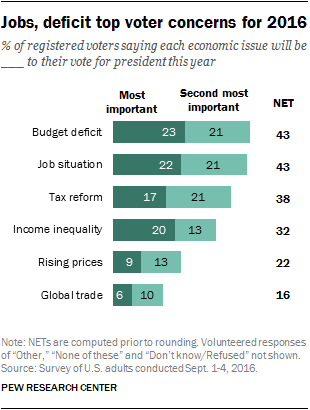 As the demand for high-skilled workers continues to grow, American voters express relatively little confidence in either major party presidential candidate when it comes to their ability to help American workers prepare to compete in today’s economy. Most question whether the campaign has focused enough on this issue.

A Pew Research Center survey, conducted Sept. 1-4, 2016, among 1,004 adults (including 815 registered voters), asked voters which of five key issues would be most important in their vote for president. The economy tops the list, with 37% of registered voters saying this will be the most important issue for them. An additional 18% choose health care and 14% say terrorism. Immigration and gun policy are each named by 13% of voters.

When asked specifically about national economic issues, the job situation shares top billing with the budget deficit in terms of issues that voters say are important to their choice for president. Among the six economic issues tested, 43% of voters say that jobs will be either the most important or the second most important issue to their vote for president; 43% give the same weight to the federal budget deficit. By comparison, other economic issues – tax reform, income inequality, rising prices and global trade – are viewed as less important to voters.

When it comes to helping workers get the skills and training they need to get a well-paying job, a large majority of voters (74%) say the presidential campaign has not focused enough on this issue. Some 14% say about the right amount of attention has been given to this issue and only 6% say the campaign has focused too much on this issue. Republicans, Democrats and independents are equally critical of the campaign in this regard. Roughly equal shares say too little attention has been given to finding ways to prepare workers for good jobs. 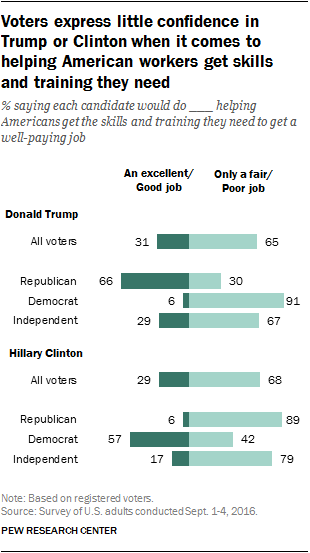 Voters are skeptical that either major party candidate would do a good job addressing this issue. When asked what kind of job Donald Trump would do when it comes to helping Americans get the skills and training they need to get a well-paying job, roughly three-in-ten voters say he would do an excellent (15%) or good job (16%). A solid majority say Trump would do only a fair (18%) or poor (47%) job.

Independent voters don’t have a lot of confidence in either candidate to do a good job on this issue: 67% say Trump would do a fair or poor job when it comes to helping American workers get the skills and training they need, and 79% say the same about Clinton.