Twice each year, in April and October, the Church of Jesus Christ of Latter-day Saints holds its General Conference in Salt Lake City, Utah. These conferences – which are open to all members of the LDS church and are broadcast around the world – offer Mormons an opportunity to hear their leaders speak on a host of topics.

As the next conference gets underway this weekend, here are six facts about U.S. Mormons from Pew Research Center surveys: 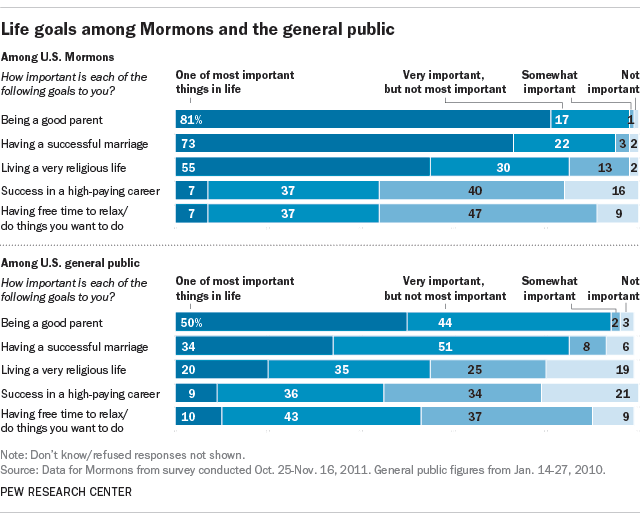 2While nearly all Mormons consider themselves Christian (97%), only about half (51%) of U.S. adults say Mormonism is a Christian religion, according to a 2012 Pew Research Center report. When asked to volunteer the one word that best describes Mormons, the most common response from Mormons surveyed was “Christian” or “Christ-centered” (17%), and an additional 5% volunteered “Jesus.” The most commonly offered response by non-Mormons was “cult.”

3Among all Christian religious traditions in the U.S., Mormons are among the most highly involved in their congregations (67%), according to an analysis based on three measures of congregational involvement: membership in a congregation, frequency of attendance at worship services and frequency of attendance at small group religious activities. Jehovah’s Witnesses have comparable levels of highly involved members (64%), while evangelical Protestants (43%), members of historically black Protestant denominations (41%) and those in other Christian groups have lower average levels of congregational involvement. In addition, our Religious Landscape Study found that Mormons are among the groups most likely to believe the Bible is the word of God (91%), pray daily (85%), say religion is very important in their lives (84%) and read scripture regularly (77%).

4A number of tenets central to the teachings of the LDS church and widely held by Mormons are not shared by other Christian traditions, our 2011 survey found. Nine-in-ten Mormons believe that the president of the LDS church is a prophet of God (94%) and that the Book of Mormon was written by ancient prophets (91%). Large majorities of Mormons believe that families can be bound together eternally in temple ceremonies (95%) and that God the Father and Jesus Christ are separate, physical beings (94%).

5Mormons are among the most politically and socially conservative religious groups in the U.S. For example, two-thirds of Mormons say they oppose allowing gay and lesbian couples to marry legally, and seven-in-ten say they think abortion should be illegal in all or most cases, according to the 2014 U.S. Religious Landscape Study. And most Mormons (69% in 2016) identify with or lean toward the Republican Party, though the share who do so has edged downward in recent years.

6Mormons are relatively young and less diverse when compared with other Christian groups, and they are younger than the U.S. population as a whole. The median age of U.S. Mormons is 43, while the median age of the general population is 46. As a religious group, they also are much less racially and ethnically diverse than the U.S. population as a whole, with fully 85% of U.S. Mormons identifying as non-Hispanic white.