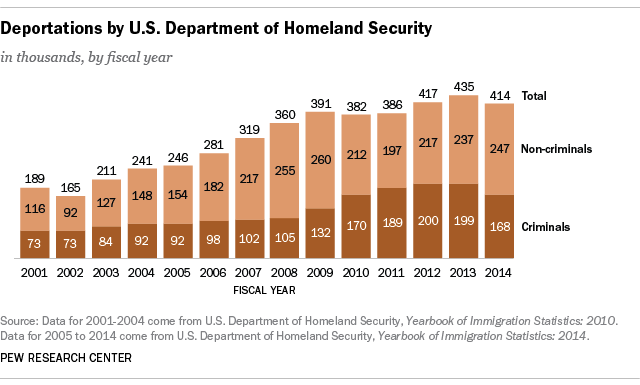 The Obama administration deported 414,481 unauthorized immigrants in fiscal year 2014, a drop of about 20,000 (or 5%) from the prior year, newly released Department of Homeland Security data show. A total 2.4 million were deported under the administration from fiscal 2009 to 2014, including a record 435,000 in 2013, according to a Pew Research Center analysis of the data.

The overall decrease is driven by a significant decline in deportations of immigrants with a criminal conviction – from 199,000 in 2013 to 168,000 in 2014. The 16% drop is just the second decline on record (1981 is the first year for which deportation data of those with criminal convictions are available). Some of this decline can be attributed to an increased focus in recent years on deporting at-large convicted criminals, as well as to an increase in 2014 in the number of state and local law enforcement agencies that did not honor immigration authorities’ requests to detain for deportation those who were in jail.

U.S. immigration policy has been an issue at the forefront of the 2016 presidential campaign, with Republican candidate Donald Trump making it a focal point of his campaign. Trump is scheduled to give a speech on Aug. 31 outlining his proposals on how to handle illegal immigration. He has vowed to deport all of the estimated 11.3 million unauthorized immigrants living in the U.S., but recently appeared to soften his stance. 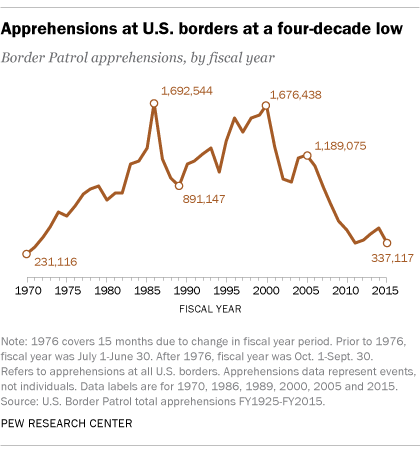 The decline is linked to new enforcement priorities issued by the Obama administration that focus exclusively on those who have been convicted of a crime, those deemed a threat for the public safety and those who have recently crossed the border. Last year marked a sharp shift on this front, with those convicted of an aggravated felony making up 81% of all convicted criminals deported by ICE, up from 51% in fiscal 2014.

In addition, border apprehensions have also declined. The 337,117 Border Patrol apprehensions in fiscal 2015 are the lowest since 1971. One reason for the decline in apprehensions is an overall decline in the number of immigrants coming to the United States. The U.S. unauthorized immigrant population peaked in 2007 and has since leveled off. It’s a trend driven largely by changes in Mexican migration, the country of origin of about half (49%) of all unauthorized immigrants. Today more Mexicans are returning home to Mexico than arriving in the U.S. Family reunification was the most common reason cited by Mexicans for their return migration. Stricter border enforcement by the U.S. has also played a role in this trend.

Correction: An earlier version of this post misstated the number of times annual deportations of immigrants with a criminal conviction had decreased.