Technology is changing the ways people seek and get knowledge, communicate and work. But Americans still tend to embrace familiarity over newness when it comes to their choices of new products, according to a new analysis of Pew Research Center survey data. 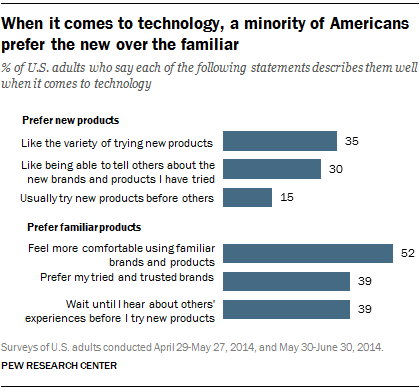 Overall, 52% of adults say they “feel more comfortable using familiar brands and products,” and 39% describe themselves as preferring to wait until they hear about others’ experiences before trying something new themselves. Similarly, 39% say they prefer their “tried and trusted” brands.

But 35% of Americans say they like the variety of trying new products, and three-in-ten like being able to tell others about their experiences with new technology. About one-in-six adults (15%) say they usually try technology products before others do. 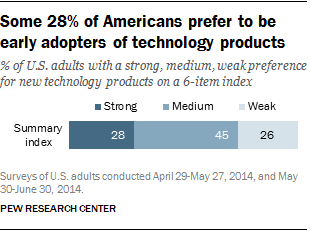 When the six questions are taken individually, the answers suggest a tilt toward the comfort of the familiar, with a committed minority of the more adventurous mixed in. 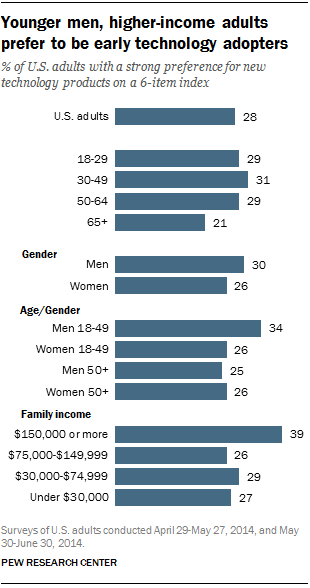 Technology products have typically come on the market with a high price tag that is out of reach for many consumers. Thus, not surprisingly, adults with family incomes of at least $150,000 annually also tend to express a stronger preference for early technology adoption on this summary index (39% do so) compared with those at middle- and lower-income levels.

Those with higher family income are also more likely to be internet users and to own cellphones, tablets and laptop or desktop computers.

There are also modest associations between two of the Big Five personality dimensions — openness to experience and extraversion — and preferences toward new technology. 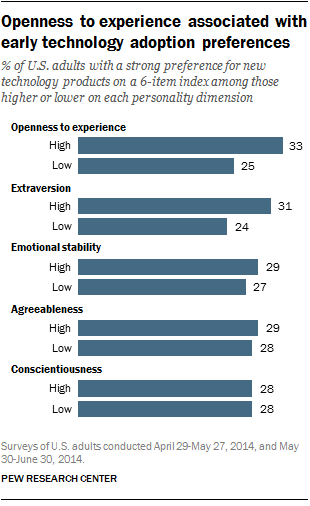 Americans with higher openness to experience are more likely to prefer early technology adoption; a third of those more open to experience have a high score on the index, compared with a quarter among those who are lower.

Do early adopters’ preferences extend to other domains?

The survey also asked a similar set of questions about food preferences to test whether people’s preferences for the new are also found in other kinds of choices people make. Using a parallel set of six questions, we classified Americans into those with strong, medium and weak “food adopter” preferences.

The results were somewhat different than those about technology. On this index, some 37% of U.S. adults have strong preferences toward being early adopters of food products, 38% are in the middle, and 25% have weak early-adopter preferences, indicating they prefer familiar food products.

There are similar patterns in which Americans are most likely to have strong early adopter preferences for food products. For example, as was the case with new technology, younger adults across the age spectrum are more likely than those ages 65 and older to express a preference for trying new food products. 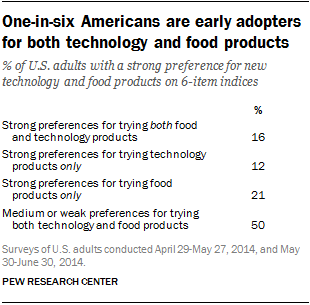 See the topline questionnaire and methodology for this survey.