Immigration to the United Kingdom has been one of the most important issues driving the debate over whether or not the UK should remain a member of the European Union. Britain’s exit from the EU, or “Brexit,” will be decided in a June 23 referendum, with some seeing an exit as a way to slow immigration into the UK.

Here are five facts about migration into and out of the UK:

2As of 2015, the UK’s immigrant population has one of the most diverse groups of origin countries in the world, tying Denmark for the highest diversity score, which measures the distribution of immigrants from different source countries. The top three origin countries of immigrants living in the UK are India (780,000), Poland (700,000) and Pakistan (540,000). 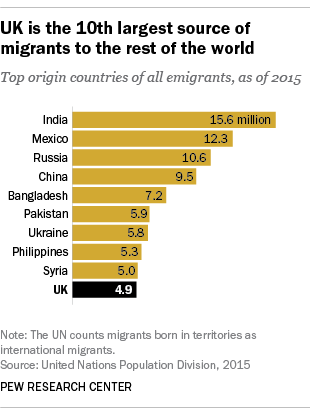 In 2015, about 4.9 million people born in the UK lived in other countries, the 10th-largest emigrant population in the world. Overall, about 8% of those born in the UK live outside its borders. By contrast, only about 1% of those born in the U.S. live outside of the United States. Among the 10 countries with the highest number of emigrants, the UK is the only Western European country to appear on the list. Other top origin countries of emigrants include India (15.6 million), Mexico (12.3 million) and Russia (10.6 million).