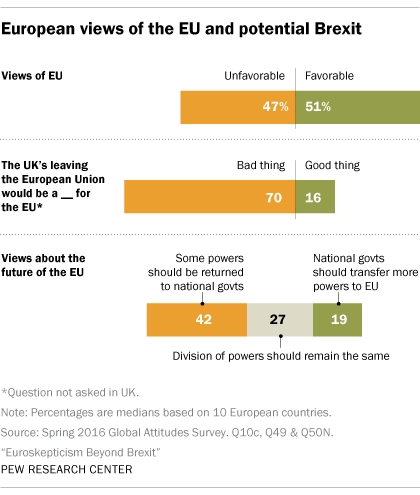 On June 23, people in the United Kingdom will vote on a referendum on whether to remain in the European Union or to leave the Brussels-based institution, a decision that has come to be called Brexit. The British go to the polls at a time when a new multi-nation survey from Pew Research Center finds that Euroskepticism is on the rise across Europe and that about two-thirds of both the British and the Greeks, along with significant minorities in other key nations, want some powers returned from Brussels to national governments. Whether favorable or not toward Brussels, most Europeans agree that a British exit would harm the 28-member EU.

A median of just 51% across 10 EU countries surveyed have a favorable view of the European Union. A median of 42% in these 10 nations want more power returned to their national capitals, while only 19% favor giving Brussels more power and 27% favor the status quo. Nevertheless, a median of 70% in the nine EU nations surveyed that don’t get a vote June 23 believe it would be bad for the EU if the UK decided to depart. Only 16% say it would be a good thing.

European publics are sharply divided along partisan lines on many of these issues. Supporters of Euroskeptic parties – especially in France, Italy, Poland, Spain and the UK – are much less likely than adherents to other major parties to have a favorable view of the European Union.

These are among the key findings from a new survey by Pew Research Center, conducted in 10 EU nations among 10,491 respondents from April 4 to May 12, 2016. The survey includes countries that account for 80% of the EU-28 population and 82% of the EU’s GDP.

A double dip in EU favorability 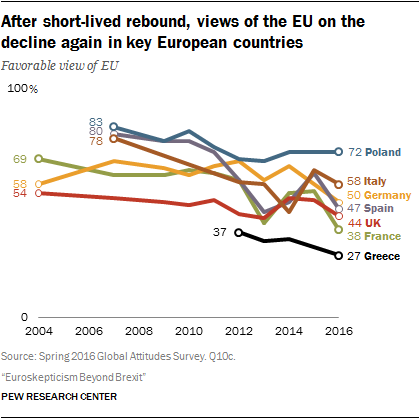 The British are not the only ones with doubts about the European Union. The EU’s image and stature have been on a roller coaster ride in recent years throughout Europe. In a number of nations the portion of the public with a favorable view of the Brussels-based institution fell markedly from 2012 to 2013 as the European economy cratered. It subsequently rebounded in 2014 and 2015. But the EU is again experiencing a sharp dip in public support in a number of its largest member states. 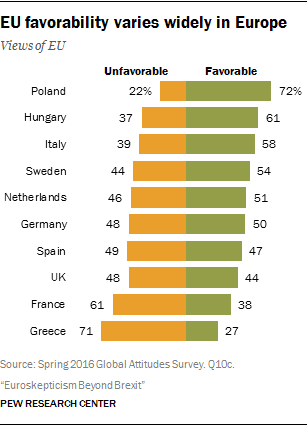 The institution’s strongest backers are the Poles (72%) and the Hungarians (61%). In many other nations, support is tepid. Just 27% of the Greeks, 38% of the French and 47% of the Spanish have a favorable opinion of the EU. Notably, 44% of the British view the EU favorably, including 53% of the Scottish.

EU favorability is down in five of the six nations surveyed in both 2015 and 2016. There has been a double-digit drop in France (down 17 percentage points) and Spain (16 points), and single-digit declines in Germany (8 points), the United Kingdom (7 points) and Italy (6 points). 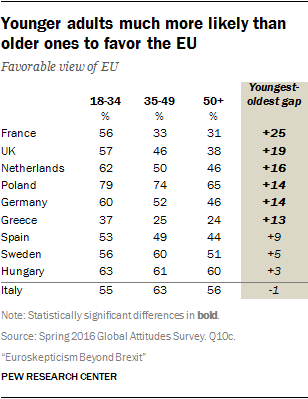 Young people – those ages 18 to 34 – are more favorable toward the European Union than people 50 and older in six of the 10 nations surveyed. The generation gap is most pronounced in France – 25 percentage points – with 56% of young people but only 31% of older people having a positive opinion of the EU. There are similar generation gaps of 19 points in the UK, 16 points in the Netherlands, 14 points in Poland and Germany, and 13 points in Greece.

The drop-off in overall EU support in key countries in the past year has been driven by a fall in favorability among older people in particular. In France, EU backing among those ages 50 and older fell 19 points. In Spain it declined 16 points and in Germany 11 points. In each case this was larger than the decline in support among those ages 18 to 34. 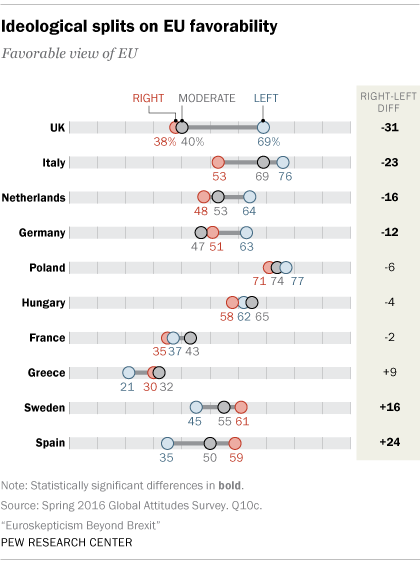 Europeans are divided along ideological lines in their views of the EU, but this division is not a simple matter of left versus right in each society. In some nations Euroskepticism is a right-wing issue, in others it is a left-wing cause.

In the UK, people who place themselves on the left of the ideological spectrum (69%) are 31 percentage points more likely than those on the right of the spectrum (38%) to have a favorable opinion of the EU. There is a similar 23-point ideological gap in Italy, a 16-point divide in the Netherlands and a 12-point difference in Germany. But in Spain people on the right (59%) are more likely than those on the left (35%) to favor the Brussels-based institution by a margin of 24 percentage points. The EU also enjoys stronger backing on the right in Sweden.

These ideological differences translate into large partisan divides on the issues. Not surprisingly, in the UK just 13% of those who identify with the Euroskeptic United Kingdom Independence Party (UKIP) hold a favorable opinion of the EU. Such views on the EU set UKIP supporters apart from the opinions of Labour Party backers (60% positive about the EU) and Conservative Party stalwarts (43% favorable toward the EU). In France, three-in-ten adherents of the Euroskeptic National Front (30%) are favorably disposed toward the EU. The country’s Republicans supporters (39%) are not much more favorable toward the EU, while about half of France’s Socialist party backers (51%) support the institution. In Spain, just 32% of the left-wing populist Podemos party adherents favor the EU. Not enough Germans identify with the Alternative for Germany (AfD) party to analyze their sentiment, but among Germans who view the AfD favorably, only a third support the EU. 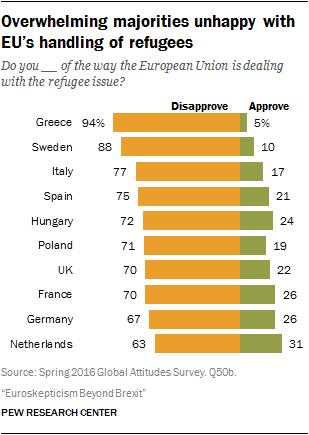 A party’s criticism of the European Union does not, however, necessarily translate into disfavor toward Brussels by the party’s adherents. In Italy, 58% of those who identify with the Euroskeptic Five Star Movement have a positive view of the EU. In Poland, where the ruling Law and Justice (PiS) party is in a feud with the EU on a range of issues, two-thirds (67%) of PiS partisans still have a favorable opinion of the Brussels institution. 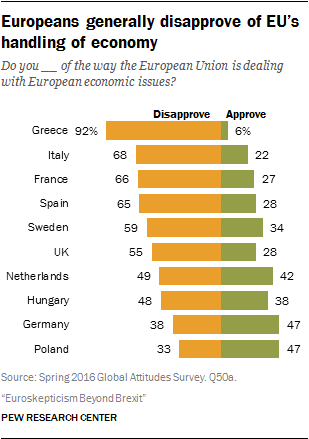 Much of the disaffection with the EU among Europeans can be attributed to Brussels’ handling of the refugee issue. In every country surveyed, overwhelming majorities disapprove of how Brussels has dealt with the problem. This includes 94% of Greeks, 88% of Swedes and 77% of Italians. The strongest approval of EU management of the refugee crisis is in the Netherlands, but that backing is a tepid 31%.

The EU’s handling of economic issues is another huge source of disaffection with the institution. About nine-in-ten Greeks (92%) disapprove of how the EU has dealt with the ongoing economic crisis. Roughly two-thirds of the Italians (68%), French (66%) and Spanish (65%) similarly disapprove. (France and Spain are the two nations where the favorability of the EU has recently experienced the largest decline.) Majorities in Sweden (59%) and the UK (55%), including 84% of UKIP supporters, also disapprove of the EU’s job in dealing with economic challenges. The strongest approval of Brussels’ economic efforts is in Poland and Germany (both 47%).

An ‘ever closer’ Europe – or not 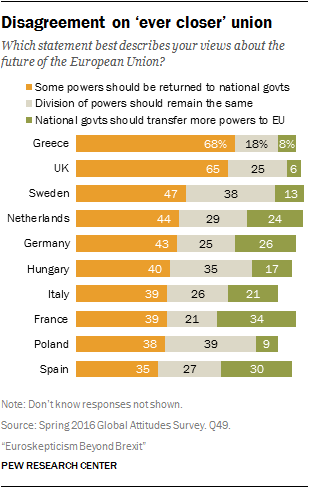 The 1957 Treaty of Rome, the founding document of what eventually became the European Union, pledges its signatories, and all the nations that later acceded to it, “…to lay the foundations of an ever closer union among the peoples of Europe.” In early 2016, British Prime Minister David Cameron negotiated an agreement with other EU governments that the founding treaty’s “references to ever closer union do not apply to the United Kingdom.” Nevertheless, disagreement over whether governance in Europe should be more or less centralized is at the center of the UK referendum debate on whether or not to exit the EU. The Pew Research Center survey finds that in six of 10 countries more people want devolution of EU power than support the status quo or favor giving more power to the Brussels-based institution.

Conversely, there is little enthusiasm for transferring more power to Brussels. As the British head to the polls, just 6% of the public in the UK wants such an outcome. And only 8% of Greeks favor more power for the EU. The strongest backing for an ever closer Europe is only 34%, in France. In most countries a quarter or more of the public prefers to keep the current division of power. 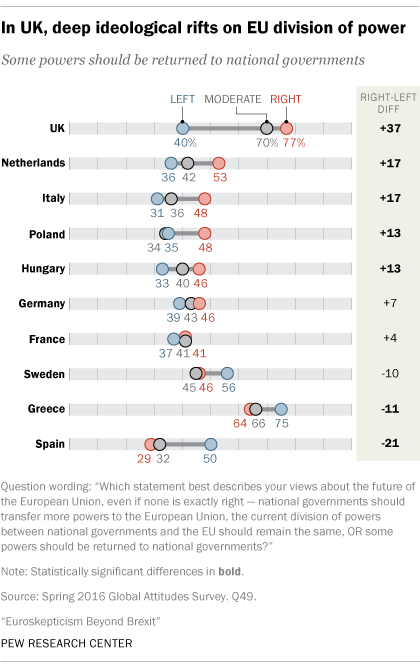 In a number of nations men express stronger opposition than women to an ever closer union. This gender gap is most prominent in the Netherlands (12 percentage points), with 50% of men, but only 38% of women favoring some powers being returned to The Hague. There is also a 10-point divide in the UK (70% of men compared with 60% of women want some powers returned to their country) and Sweden (52% of men vs. 42% of women).

The largest ideological gap on European division of powers is in the United Kingdom. Roughly three-quarters (77%) of people who place themselves on the right of the political spectrum favor returning some EU powers to London. Just 40% of people on the left agree. In the Netherlands, a little over half (53%) of people on the right, but only about a third (36%) of Dutch on the left support a less centralized EU. Notably, this right-left divide is reversed in Spain, and is especially large. Half of Spanish leftists, but only about three-in-ten (29%) Spanish rightists want more power brought back to Madrid.

This ideological split also manifests itself in the views of political party adherents. In the United Kingdom, 93% of UKIP supporters think that some powers now held by the EU should be returned to national governments. Conservatives (77%) agree with them more than Labour Party (49%) adherents. In Italy, 51% of Five Star supporters want some power to revert to Rome; 37% of Forza Italia partisans and 28% of Democratic Party supporters agree. In Poland, 45% of PiS backers, but only 20% of PO adherents want some power returned to Warsaw. In Spain, 44% of Podemos partisans want some EU power back in Madrid, 37% of supporters of the Spanish Socialist Workers’ Party (PSOE) want this, and 34% of the Ciudadanos and 26% of those identifying with the People’s Party (PP) concur. In France, a plurality of National Front supporters (39%) want Paris to regain some of its power from Brussels. A larger share of Republican backers (43%) want to bring powers home from Brussels, but only 28% of Socialists agree.

Is Brexit bad for the EU? 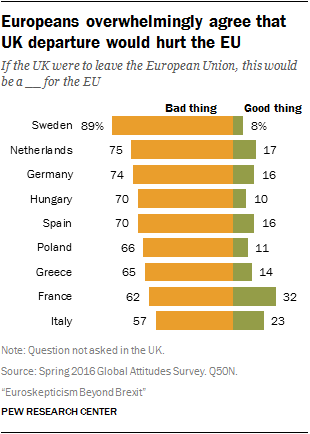 There is overwhelming sentiment across Europe that Brexit would be a bad thing for the European institution: 89% in Sweden, 75% in the Netherlands and 74% in Germany say the British leaving would be not good for the EU.

France is the only country where more than a quarter (32%) of the public says it would be positive for the EU if the UK departed.

Euroskepticism Beyond Brexit
A double dip in EU favorabilityAn ‘ever closer’ Europe – or notIs Brexit bad for the EU?
Acknowledgments Methodology