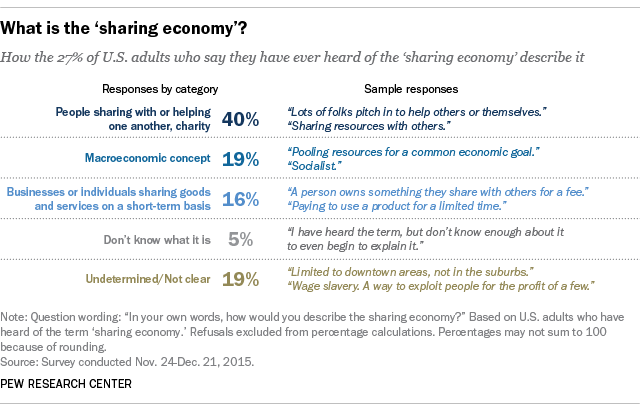 Even though stories about services like Uber and Airbnb have put the “sharing economy” in the news, just 27% of Americans have ever heard of the term before, according to Pew Research Center’s recent survey of the new digital economy. Moreover, even those who have heard of the term have widely divergent views about what the sharing economy actually is.

In our survey, we asked respondents who had heard of the sharing economy to tell us – in their own words – how they would describe the term. After reviewing and classifying nearly 1,300 responses to this question, we uncovered several distinct themes about what people think of when they hear the term sharing economy.

Ultimately, the responses made clear that while the term “sharing economy” might mean something specific to those who follow the subject or are deeply embedded in the technology industry, the public as a whole has a very tenuous grasp of what the sharing economy stands for.

The most common description of the sharing economy emphasizes the “sharing” component of the phrase while ignoring the “economy” aspect. This was a view voiced by 40% of those who were aware of the term and provided a description that could be classified. Indeed, many of these Americans think of the sharing economy in the literal sense of individuals sharing with one another, with many framing this around the notion of charity or helping those in need through the sharing of resources:

“Helping others with what you are able when they are in need.”

“Helping the less fortunate to try and get them back on their feet and be successful.”

Others in this group viewed the term through a local or neighborhood focus, frequently using terms like “community” or “friends” in their responses:

“Having a set of friends and neighbors who borrow each other’s stuff, so everyone doesn’t need to buy their own rarely used items.”

“Communities owning one item that is only occasionally used, and sharing it … [like a] lawnmower, for example.”

The next largest group, representing 19% of responses to this question, viewed this term in a macroeconomic sense – often as a form of socialism or as a way to redistribute resources:

“An economy that is structured more like a socialist state. Meaning, everyone gets a fairly equal share of profits.”

“An economy in which those who have more than they need, share with those who do not have enough.”

“I think it means that the Democrats want to take money away from the rich and share it with the poor. But I might be wrong.”

Meanwhile, 16% described the sharing economy in roughly the way that the term is commonly used – that is, as businesses or individuals “sharing” services or resources on a short-term basis:

“… A sharing economy is based on owners who rent out something useful they are not using, such as a car, house or recreational vehicle. Essentially this is a peer-to-peer-based access to property or services made available by others.”

“Making money [off] things you own by letting other people use them.”

In many cases, people used familiar brands in their descriptions – especially high-profile services such as Uber or Airbnb – to help describe their point:

“Over the past decade start-ups like Uber, Airbnb have disrupted previously regulated hotel and taxi industries. The properties and cars used in these are privately owned by thousands of individuals. The sharing may refer to the owners sharing their goods for a price.”

“It’s like Airbnb when you pay people to stay in their house, but it’s not a licensed hotel.”

“Individuals offering a service to other people, either through a company such as Airbnb, or as independent contractors such as Uber.”

In fairness to the public, they are not the only ones finding it challenging to come up with a consistent definition for the sharing economy: A number of experts who study the industry have argued that the term has become more confusing than enlightening as more and more services are placed under the “sharing” banner.

Q&A: The impact and evolution of the sharing economy
Sharing and on-demand services attract a small but active group of ‘super users’
Americans and the new digital economy: 8 key findings
Key findings about Americans’ views on COVID-19 contact tracing
What we learned about surveying with mobile apps
Quiz: Are you a Core Conservative? A Solid Liberal? Or somewhere in between?
A rising share of working parents in the U.S. say it’s been difficult to handle child care during the pandemic
Views on Race in America 2019
Biden Begins Presidency With Positive Ratings; Trump Departs With Lowest-Ever Job Mark
Defining generations: Where Millennials end and Generation Z begins