Digital technology has ushered in a slew of new shared, collaborative and on-demand online services ranging from virtual marketplaces to home sharing. These services have potentially far-reaching implications for consumers and regulators and for the future of work in this country. To examine the scope and impact of these new services, Pew Research Center conducted its first survey devoted to the broader issues of the new digital economy.

Here are eight findings from the report: 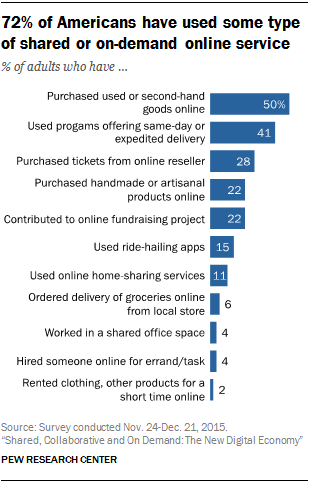 Nearly three-quarters of Americans have used a shared, collaborative or on-demand online service. Pew Research Center asked American adults whether or not they have used 11 different services tied to the new digital economy, and fully 72% say they have used at least one of them.

2Some Americans are avid users of these services, but a greater share has had little to no exposure to these platforms and services. Some 21% of U.S. adults have used four or more of these services. These intensive users are disproportionately likely to be college graduates, to be under the age of 45 and to have relatively high household incomes. On the other hand, 28% of Americans report they have not used any of these services, and 20% have used just one.

4Ride-sharing’s growing presence has prompted a debate over whether its drivers are contractors or employees. Two-thirds of ride-hailing users (66%) think of the drivers who work for these services as independent contractors who work for themselves, while 23% view them as employees of the app or service. At the same time, most users expect that these services should play a significant role in managing the overall customer experience – from ensuring that drivers are properly trained to making sure that vehicles are safe.

6The public is less aware of the legal debate around home-sharing services. Just 19% of home-sharing users say they have heard a lot about the legal debate surrounding these services, while 43% have heard nothing at all. When asked about the best way to regulate these services, 56% of users feel that these services should be legal, and that homeowners using them should not have to pay hotel or lodging taxes; 31% think that homeowners should in fact have to pay these sorts of taxes. 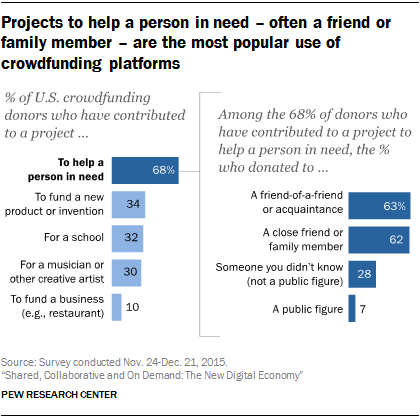 About one-in-five Americans (22%) have contributed to a “crowdfunded” online fundraising project, while 3% have created their own fundraising project on one of these sites. Although large-scale fundraising projects get most of the attention in news stories, there are far more instances of people using crowdfunding platforms to help someone in need, often a person close to them. Roughly two-thirds (68%) of crowdfunding donors have contributed to a project to help a person facing a hardship or financial challenge,  and around six-in-ten say they did so on behalf of an acquaintance, close friend or family member.

8Users have a range of views about the perceived safety of some sharing economy services like ride-hailing apps and home-sharing services. Overall, 70% of ride-hailers feel that these services use drivers they feel safe riding with (just 5% disagree), although female users are a bit more likely to express concerns about driver safety than are male users. By the same token, around one-in-five home-sharing users feel that these services are risky to use – even though a much larger share (58%) disagree with this notion.

Q&A: The impact and evolution of the sharing economy

How Americans define the sharing economy