The American middle class is shrinking at the national level, as was documented in a previous study by Pew Research Center. Our new analysis of government data finds that the middle class is also losing ground in the vast majority of metropolitan areas in the country. 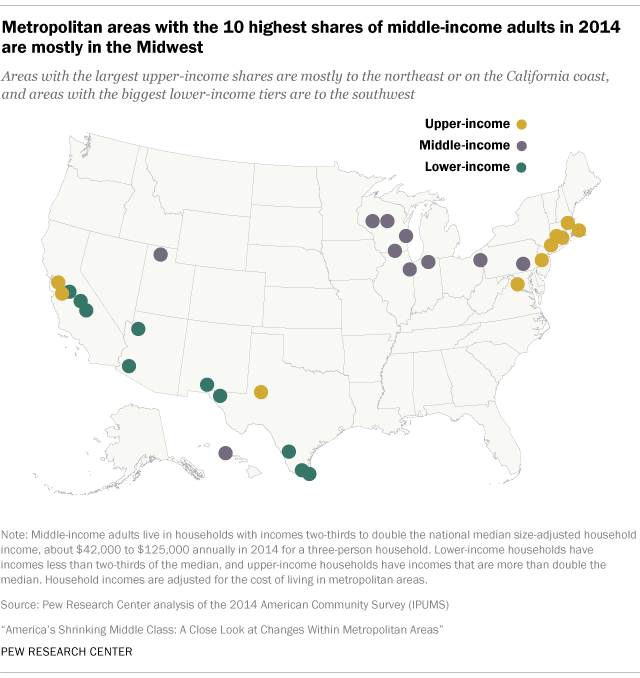 Here are six key takeaways from the new report:

The decline in the share of adults who are middle class nationally also proved to be a pervasive local phenomenon in the period from 2000 to 2014. Affecting communities from Boston to Seattle and from Dallas to Milwaukee, the share of adults living in middle-income households fell in 203 out of 229 U.S. metropolitan areas examined from 2000 to 2014. With fewer Americans in the middle-income tier, the economic tiers above and below have grown in significance over time. The share of adults in the lower-income tier rose in 160 areas, and the share in the upper-income tier increased in 172 areas. These trends were not mutually exclusive – the shares of adults in the lower- and upper-income tiers both increased in 108 metropolitan areas. 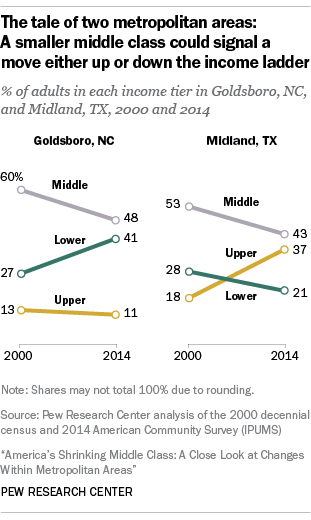 The share of adults in the upper-income tier increased more than the lower-income share in about half the metropolitan areas analyzed. Across the 229 areas, adults were more likely to climb the income ladder than to descend it in 119 areas. The areas that experienced the biggest gains in economic status from 2000 to 2014 are a diverse group, including energy-based economies such as Midland, Texas; the tourism-driven locality of Barnstable Town, Massachusetts; and the meat-packing area of Amarillo, Texas. But the lower-income share increased more in 110 areas. The areas that slipped the most in economic status include Goldsboro, North Carolina, and Springfield, Ohio. Many of these areas are more reliant than average on manufacturing, but other factors likely played a role as well.

4Households in all economic tiers experienced near-universal decreases in median incomes across U.S. metropolitan areas. Middle-income households lost ground financially in 222 of 229 metropolitan areas from 1999 to 2014. Meanwhile, those in the lower-income tier saw their median income slip in 221 areas and those in the upper-income households took a financial hit in 215 areas.

The 229 metropolitan areas we examined, out of a total of 381 currently defined by the federal government, are the ones that are identifiable in publicly available Census Bureau datasets and for which data were available for both 2000 and 2014. They accounted for 76% of the nation’s population in 2014.