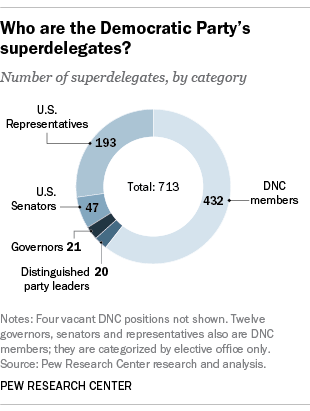 This year’s Democratic presidential primary contest has been surprisingly competitive, and it’s not over yet. As the race enters its final weeks, Bernie Sanders and his supporters are stepping up their efforts to pry loose some of the “superdelegates” who are backing rival Hillary Clinton. Which made us wonder: Just who are these 700-plus party officeholders and insiders who automatically get delegate spots at July’s convention and can vote for whomever they want?

In short, they’re the embodiment of the institutional Democratic Party – everyone from former presidents, congressional leaders and big-money fundraisers to mayors, labor leaders and longtime local party functionaries. Nearly six-in-ten are men, close to two-thirds are white, and their average age (as best we could tell) is around 60.

Superdelegates (not an official designation, by the way; their formal name is “unpledged party leaders and elected officials”) will account for just under 15% of all delegate votes at July’s Democratic National Convention. We worked from a list made public by the national Democratic Party (originally to Vox), and updated and corrected it to account for deaths, resignations and, in at least one case, criminal conviction. We came up with a total of 713 named superdelegates (a handful of slots are still vacant), then used a mix of official biographies, news reports, social-media postings and other sources to determine each superdelegate’s gender, race/ethnicity and, in most cases, age. 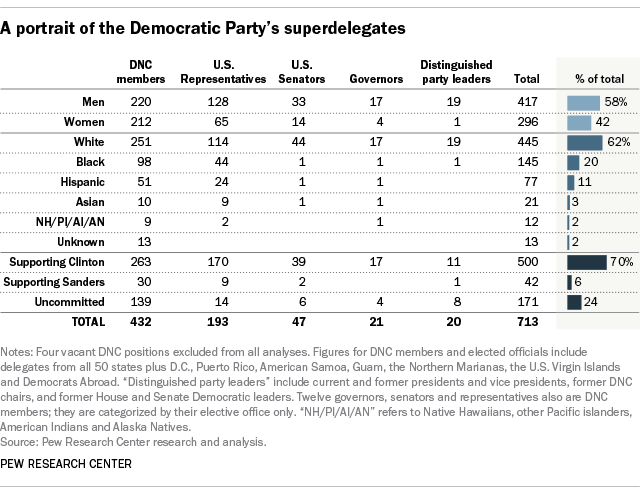 Not just anyone gets to be a superdelegate. Under party rules, all sitting Democratic governors (21, including the mayor of Washington, D.C.), senators (47) and representatives (193) automatically get their convention tickets punched. So do 20 “distinguished party leaders” – current and former presidents and vice presidents, retired House and Senate Democratic leaders, and all past chairs of the Democratic National Committee, the party’s governing body.

But most superdelegates gain that status because they’re DNC officers or members. That includes the chairs and vice chairs of each state and territorial Democratic Party; 212 national committeemen and committeewomen elected to represent their states; top officials of the DNC itself and several of its auxiliary groups (such as the Democratic Attorneys General Association, the National Federation of Democratic Women and the Young Democrats of America); and 75 at-large members who are nominated by the party chairman and chosen by the full DNC. (Most of those at-large members are local party leaders, officeholders and donors or representatives of important Democratic constituencies, such as organized labor.)

The party’s official policy of encouraging gender equity and racial/ethnic diversity is most reflected among the superdelegates coming from the DNC itself: The male-female split is nearly equal (220-212), and non-Hispanic whites make up less than 60% of the total. The House members are similarly diverse on racial and ethnic lines, but two-thirds are men. Two-thirds of the senators and governors are white men, as are all but two of the distinguished party leaders.

Part of the “super” in superdelegates is that they’re not bound to support any particular candidate, and are free to shift their allegiance – or refrain from committing to anyone – right up to the convention’s roll-call vote on the nomination. While many Sanders supporters say the entire superdelegate system is undemocratic, the Sanders campaign wants to turn their flexibility in his favor, arguing that Sanders’ recent primary victories (most recently in Indiana) are reasons superdelegates should back the senator rather than Clinton.

But based on their public endorsements to date, that looks to be a heavy lift. According to our count, 500 superdelegates are backing Clinton against just 42 for Sanders; that translates into 498 and 41 convention votes, respectively, because the superdelegates representing overseas Democrats have a half-vote each. (Fair warning: Any such counts are inherently imprecise – the Associated Press, for instance, has similar but slightly different numbers.) More than 85% of Democratic governors, senators and representatives are supporting Clinton, as are 61% of superdelegates from the DNC.

Although we could find age information for only 547 superdelegates, what we do have suggests that Sanders’ superdelegates are a bit younger, on average, than Clinton’s: The average age of superdelegates backing Sanders was 58.9, versus 60.8 for Clinton’s supporters; their median ages were 60.8 and 61.9, respectively.