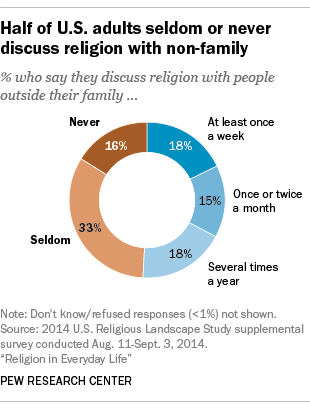 According to Miss Manners, polite people do not bring up religion in social conversations. Of course, if Americans stayed away from all the topics the etiquette columnist deems taboo in polite company – including politics, money, sex, illness and what people are wearing – a lot of dinners would pass by in silence.

But, judging by the results of our recently released survey on religion in everyday life, religion does indeed seem to be a subject many people avoid. About half of U.S. adults tell us they seldom (33%) or never (16%) talk about religion with people outside their family. And roughly four-in-ten say they seldom (26%) or never (13%) discuss religion even with members of their immediate family. 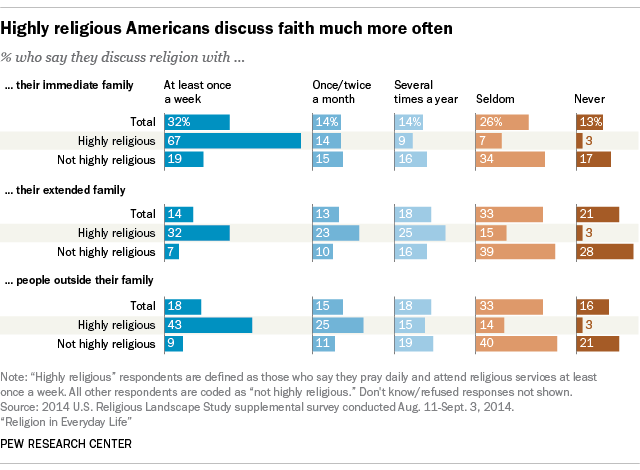 Evangelical Protestants and members of historically black Protestant churches are especially likely to have religious conversations. More than half of evangelicals say they talk about religion with people outside their family, either every week (33%) or once or twice a month (22%). But that may include a fair number of conversations with fellow evangelicals or, at least, with other Christians. Despite the common assumption that evangelicals are eager to persuade others to adopt their religious beliefs, that’s not what most say they do. 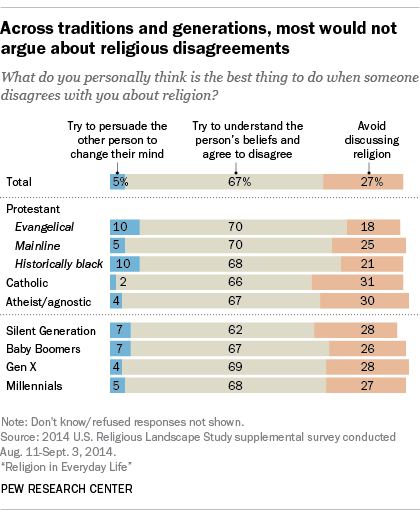 In fact, in our survey, when we asked people what they do “when someone disagrees with you about religion,” just 10% of evangelicals say they “try to persuade the person to change their mind.” The vast majority of evangelical Protestants (70%) try to “understand the person’s beliefs and agree to disagree,” while about one-in-six (18%) say they “avoid discussing religion with the person” altogether.

In general, on this question, there are few differences across most major religious groups. For instance, like evangelicals, most atheists and agnostics have a live and let live attitude about religious disagreements. Indeed, the stereotype of an argumentative atheist constantly trying to persuade people to give up their religious beliefs does not fit with their self-described behavior. When atheists and agnostics encounter a person who disagrees with them about religion, only 4% say they try to persuade the person to change their mind. Fully two-thirds of people in this group say they try to understand the person’s beliefs and agree to disagree, while 30% say they avoid discussing religion with the person. Indeed, nearly three-quarters of atheists and agnostics say they either seldom (45%) or never (28%) discuss religion with people outside their family.

Millennials may be less attached to institutional religion than older Americans, but generally they are no more argumentative about religion than other generations. For example, roughly two-thirds of Baby Boomers (67%), Generation Xers (69%) and Millennials (68%) and 62% of the Silent Generation say the best thing to do when they encounter someone who disagrees with them about religion is to try to understand the other person’s views and agree to disagree. And just 7% of Boomers and Silents as well as 5% of Millennials and 4% of those in Generation X would try to change the person’s mind.