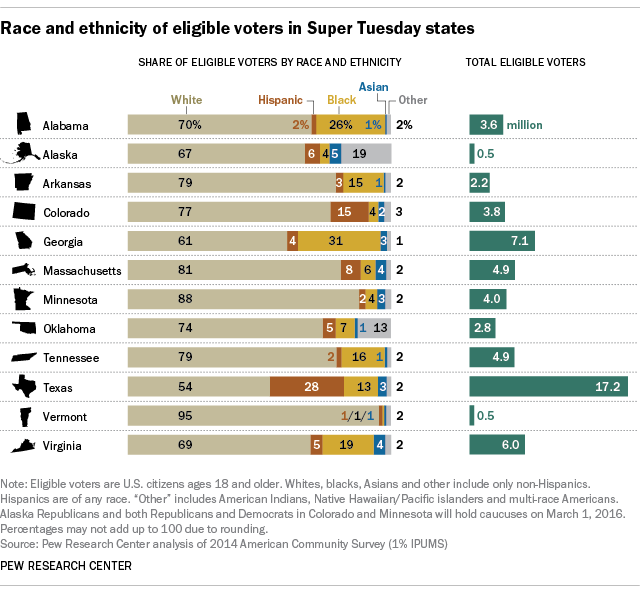 The U.S. electorate this year will be the country’s most diverse ever, and that is evident in several Super Tuesday states holding primaries or caucuses on March 1 in which blacks could have a significant impact.

In five of 12 Super Tuesday states, blacks account for at least 15% of the electorate, according to a Pew Research Center analysis of 2014 census data. Black eligible voters have the largest footprint in Georgia (31%) and Alabama (26%), while Virginia, Tennessee and Arkansas also have sizable black electorates.

In a reversal of historical migration trends, Southern states have seen their black populations increase more than twice as fast as non-Southern states since 1990. From 1910 to 1970, 6 million blacks left the South, with many pursuing industrial jobs in Northern cities in what is called the Great Migration. But since then, blacks have increasingly chosen to live in the South.

Blacks have long leaned toward the Democratic Party, according to Pew Research Center surveys. In 2014, 80% identified as or leaned Democratic, compared with 56% of Hispanics and 40% of whites.

Hispanics have a large presence in the Super Tuesday states of Texas and Colorado. In Texas, Hispanics make up 28% of the electorate and outnumber blacks 4.8 million to 2.2 million. In Colorado, Hispanics make up a rising share of eligible voters, standing at nearly 15% in 2014, up from nearly 13% in 2008. Overall, Hispanics favor the Democratic Party, but to a lesser degree than blacks. Exit polls in 2014 in some states showed significant shares of Hispanic voters supporting Republican candidates in races for governor and U.S. Senate.

Alaska stands apart from other Super Tuesday states because of its large Native American population. American Indians or Alaska Natives make up 13% of Alaska’s electorate (and in Oklahoma they make up 7% of eligible voters.)

Key facts about Black eligible voters in 2020 battleground states
Black eligible voters have accounted for nearly half of Georgia electorate’s growth since 2000
2016 electorate will be the most diverse in U.S. history
Just how 'super' is this year's Super Tuesday, anyway?
What the 2020 electorate looks like by party, race and ethnicity, age, education and religion