As Hillary Clinton and Bernie Sanders battle over who better represents progressive or liberal values, it’s clear that Democratic voters overall have become increasingly comfortable with the “liberal” label. 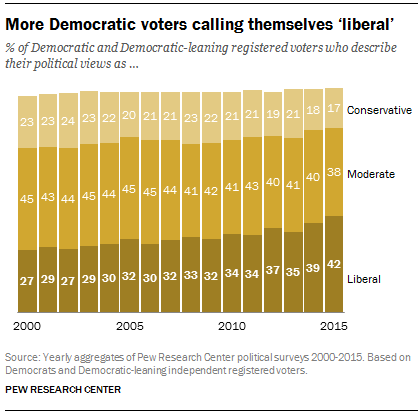 From 2000 to 2015, the share of Democratic and Democratic-leaning registered voters describing their political views as liberal increased by 15 percentage points, from 27% to 42%.

White Democrats in particular increasingly characterize their political views as liberal, while blacks and Hispanics are far less likely to embrace that description. In 2015, half of white Democratic and Democratic-leaning registered voters called themselves liberals, up 22 percentage points since 2000 (28%). 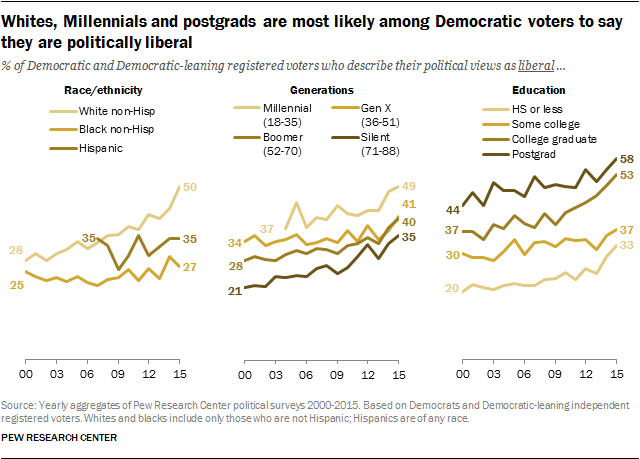 By contrast, more black and Hispanic Democratic voters characterized their views as moderate than liberal in 2015, and the self-described political views of both groups have remained stable in recent years. Last year, 42% of black Democrats called themselves moderates, 29% said they were conservatives and 27% called themselves liberals. Among Hispanic Democrats, 39% described their political views as moderate, 35% as liberal and 24% as conservative.

It’s important to note that how people describe their views and their actual political attitudes and values are different things, though clearly they are strongly related. While most Americans continue to express at least some mix of liberal and conservative attitudes, the shares who hold both uniformly liberal or conservative values is growing.