The U.S. electorate this year will be the country’s most racially and ethnically diverse ever. Nearly one-in-three eligible voters on Election Day (31%) will be Hispanic, black, Asian or another racial or ethnic minority, up from 29% in 2012. Much of this change is due to strong growth among Hispanic eligible voters, in particular U.S.-born youth.

An analysis of changes in the nation’s eligible voting population – U.S. citizens ages 18 and older – offers a preview of profound U.S. demographic shifts that are projected to continue for decades to come. While the nation’s 156 million non-Hispanic white eligible voters in 2016 far outnumber the 70 million eligible voters that are racial or ethnic minorities, their growth lags that of minority groups. As a result, the non-Hispanic white share of the electorate has fallen from 71% in 2012 to 69%. 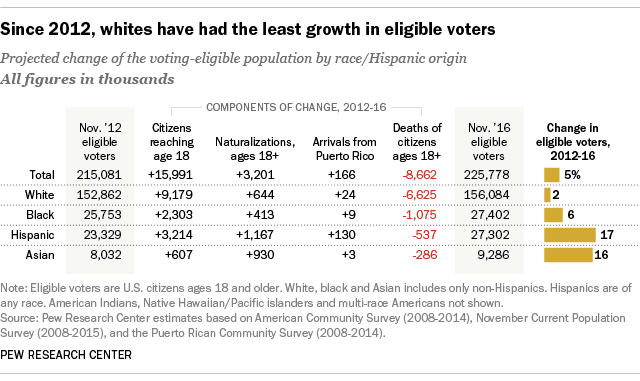 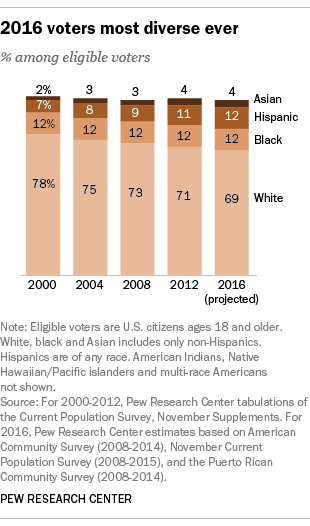 While the U.S. electorate is growing more diverse, there’s a caveat when it comes to the impact of these changes: the relatively low voter turnout rates among Hispanics and Asians. In the 2012 presidential election, 64% of non-Hispanic white eligible voters cast ballots, as did 67% of black eligible voters. By comparison, the voter turnout rate was 48% among Hispanics and 47% among Asians.