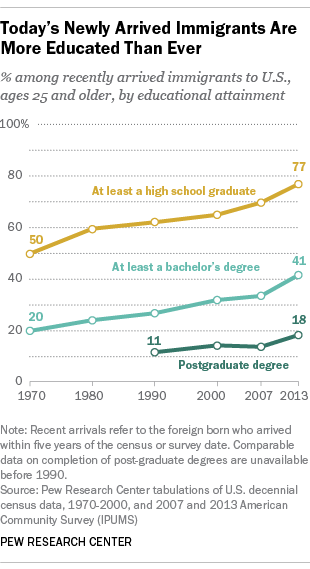 The immigrants who have recently come to the United States are the most highly educated in history. A new Pew Research Center analysis of U.S. Census Bureau data shows that 41% of immigrants arriving here in the past five years had completed at least a bachelor’s degree. By comparison, only 20% of newly arrived immigrants in 1970 were similarly educated.

Educational attainment has also risen over the past 50 years for adults born in the U.S. For example, in 2013, three-in-ten U.S.-born adults had completed at least a bachelor’s degree, triple the share of U.S.-born adults that had done the same in 1970.

But newly arrived immigrants remain more likely than the U.S. born to have earned a degree, and that gap is now at its biggest since 1970. In that year, new arrivals had a 9-percentage-point advantage over U.S.-born adults in the share completing a bachelor’s degree (20% versus 11%). That advantage narrowed to 6 points in 1990. But the advantage in college completion held by recently arrived immigrants has since widened, to about 12 points as of 2013 (41% versus 30%).

On the other end of the education spectrum, almost a quarter (23%) of today’s new arrivals have not completed high school. Even so, it’s an improvement over 1970, when half of newly arrived immigrants had not finished high school. 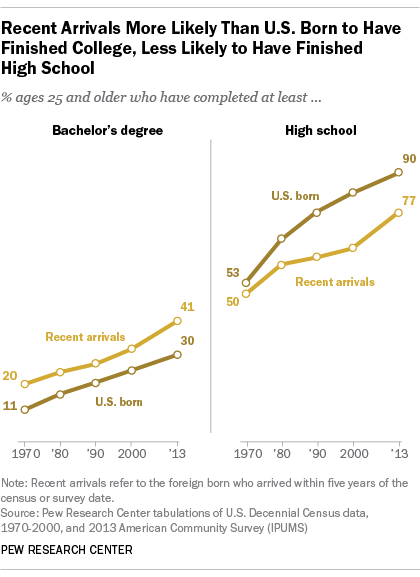 The improved educational profile of recent arrivals that has quickened in the new century is likely due to several factors. First, immigrant arrivals from Asia – now the region sending the most new immigrants to the U.S. – tend to be very well educated, with some 57% of them holding at least a bachelor’s degree in 2013.