When Pope Francis spoke before a joint session of Congress on Thursday, he described himself as the “son of immigrants” from Italy to Argentina and urged lawmakers to welcome those who come here searching for a better life. Whatever the partisan divide on Capitol Hill on the issue, it is a position most Americans embrace, at least when it comes to undocumented immigrants.

Roughly seven-in-ten American adults (72%) say that undocumented immigrants living in the U.S. who meet certain requirements should be allowed to stay legally, according to a Pew Research Center survey conducted in May. A nearly identical share of U.S. Catholics (73%) also say this. 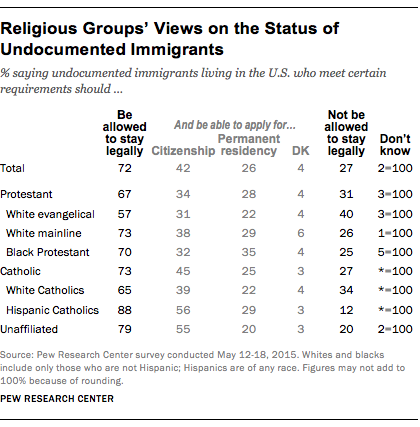 Religious affiliation is not the most important factor when looking at the views of U.S. adults on immigration. There are bigger differences by political party and ethnicity on this issue – i.e., Democrats are more likely than Republicans to say undocumented immigrants should be allowed to stay legally, and Hispanics are more likely than whites and blacks to hold that view. 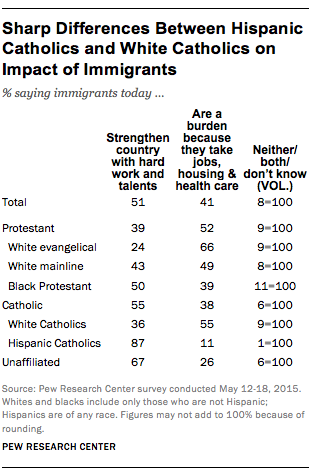 Among religious groups, those who are unaffiliated with any religion (atheists, agnostics and those who have no particular religion) are among the most likely to say undocumented immigrants should be allowed to stay (79%). White evangelical Protestants are less likely to share this view, although a majority (57%) do say that undocumented immigrants who meet certain requirements should be granted legal status. White mainline Protestants (73%) and black Protestants (70%) fall in between, and look very similar to U.S. Catholics and U.S. adults overall.

There are also differences by religious affiliation on the question of whether immigrants in general strengthen the country with their hard work and talents or whether they are a burden, although these are not as big as the stark divisions on this question by political party and ethnicity.

Fully two-thirds of white evangelicals (66%) express the view that immigrants are a burden on society. A similar share of religiously unaffiliated Americans (67%) take the opposite stance, saying that immigrants strengthen the country with their hard work and talents.

Americans broadly support legal status for immigrants brought to the U.S. illegally as children
Unauthorized Immigrants: Who they are and what the public thinks
Hispanics prioritize legalization for unauthorized immigrants over citizenship
Americans’ views of immigrants marked by widening partisan, generational divides
5 facts about Trump supporters’ views of immigration