Following his election in March 2013, Pope Francis wasted little time in conveying his great unease with the state of global poverty and inequality. He wrote:

“The need to resolve the structural causes of poverty cannot be delayed, not only for the pragmatic reason of its urgency for the good order of society, but because society needs to be cured of a sickness which is weakening and frustrating it, and which can only lead to new crises. … Inequality is the root of social ills.”

The urgency expressed by Pope Francis is grounded in harsh reality.

The vast majority of the world’s population lives on a budget that falls well short of the poverty line in advanced economies. Specifically, 4.4 billion people – 71% of the global population of 6.2 billion – lived on $10 or less per day in 2011, according to a Pew Research Center analysis of the most recently available data.

In stark contrast, the poverty line in the U.S. was $15.77 per day per capita for a four-person household in 2011. Moreover, the median daily income of poor Americans was $11.45 per capita, greater than the income of more than seven-in-ten people globally. (All dollar figures are expressed in 2011 prices and purchasing power parities.) 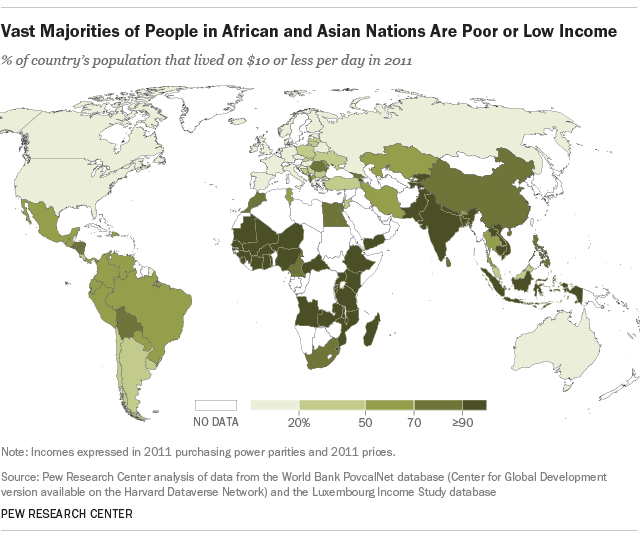 In 2011, 90% of poor and low-income people lived in Africa and Asia-South Pacific (South Pacific includes Australia and Fiji). On the other hand, only 4% of those managing on $10 or less daily lived in North America and Europe. By comparison, about three-quarters (74%) of the global population lives in Africa and Asia-South Pacific and 19% lives in North America and Europe. (See our report for a list of countries included in each region.)

Our report categorized people as high-income if their daily budget exceeded $50. This is not a big leap for advanced economies – the median income in many such countries is greater. However, only 9% of the global high-income population lives in Africa and Asia-South Pacific, compared with 87% in North America and Europe.

The living standards within most African and Asian nations point to deep levels of impoverishment. In 18 of the 28 countries in Asia-South Pacific covered in the Pew Research study, nearly eight-in-ten people or more were either poor or low income in 2011. This group includes India, where 97% of the population is poor or low income, and China, where the share is 78%.

It is impossible to know if and when Pope Francis’ wish for an end to global poverty and inequality will be fulfilled. Other recent Pew Research surveys find optimism among people in Africa, India and China about their economic futures. But it is not unbridled enthusiasm. Most Africans recognize the challenges ahead, including the need for improvement in health care and education. In India, there’s concern about lack of employment opportunities and rising prices. And in China, inflation, corruption and inequality top the list of public concerns.