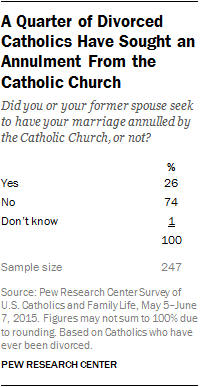 Pope Francis has announced major changes to the Roman Catholic Church’s procedures for marriage annulments. While the new changes are aimed at making annulments faster and less expensive, a recent Pew Research Center survey found that most divorced U.S. Catholics who did not seek annulments did not cite the complicated nature of the process as a reason.

The Catholic Church teaches that marriages are unbreakable unions, and thus remarrying after a divorce (without an annulment) is a sin. But an annulment – a declaration from the church that a marriage was never valid – makes it possible for divorced Catholics to enter a new marriage and still be eligible to receive Communion.

A quarter of U.S. Catholic adults say they have experienced a divorce, according to our survey. That’s somewhat fewer than among U.S. adults overall (30%). Among U.S. Catholics who have ever been divorced, roughly a quarter (26%) say they or their former spouse have sought an annulment from the Catholic Church.

The survey asked all U.S. Catholics who have been divorced and have not sought an annulment why they did not do so. 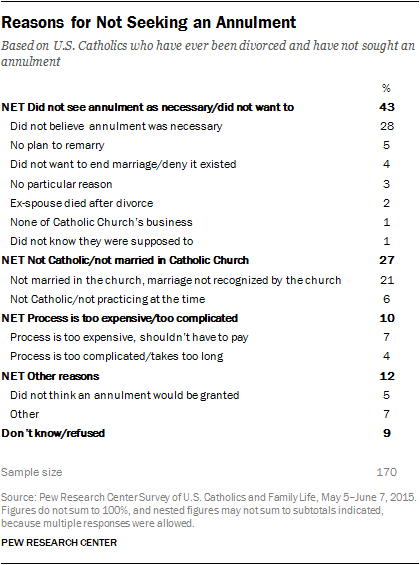 Only about one-in-ten say they did not attempt to get an annulment because it was too expensive (7%) or too complicated or time-consuming (4%).

While there were not enough respondents who were divorced and remarried without an annulment to analyze separately in the survey, they can be looked at together with Catholics who are currently living with a romantic partner outside of marriage, another group presumably ineligible for Communion in the eyes of the church.

About a third (35%) of all U.S. Catholics say remarrying after a divorce without an annulment is a sin. Roughly half (49%) say this is not a sin. And about six-in-ten Catholics (62%) say the church should allow divorced Catholics who remarry without getting an annulment to receive Communion, while 54% say they expect this change to happen in the next few decades.