It may seem as if basic or flip phones are a thing of the past, given that 73% of teens have a smartphone. But that still leaves 15% of teens who only have a basic cellphone and 12% who have none at all, and it makes a difference in the way each group communicates, according to a recent Pew Research Center study. 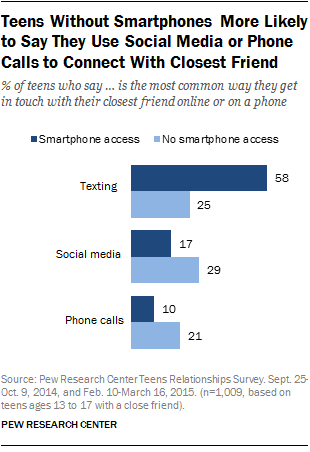 Texting is an especially popular way for smartphone-using teens to communicate with their closest friends, while teens without a smartphone are more likely than their smartphone-using counterparts to use social media and phone calls as their preferred ways for connecting with their best pals.

On the other hand, non-smartphone-using teens are more likely than those with smartphones to keep in touch with their closest friend via social media. Some 29% of teens without smartphone access cited social media as their most common online or phone method of communicating with a best friend, compared with 17% for smartphone users who did so.

For the 12% of teens who don’t have access to any type of cellphone, social media is by far their most used method for communicating with a close friend—37% of this group say they connect with close friends there. (Teens were not asked how they access social media, but there are several non-phone based ways to do so, i.e. computer, laptop, game console.)

Talking on the phone is also more common among the non-smartphone group, with 21% of these teens saying they make phone calls to their closest friend as a primary mode of keeping in touch, double the share for smartphone users. 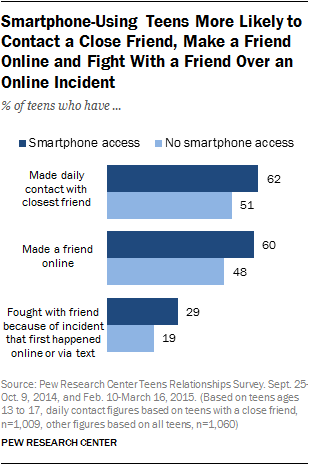 Outside of the different communication channels that teens use to interact, having a smartphone helps teens more frequently stay in contact with their close friends and forge new relationships online.

But having a smartphone, and the constant access to the Web it provides, does not mean that teens are not interacting with their close friends face-to-face. In fact, teen smartphone users are more likely to say they spend time with their closest friend at a number of in-person activities, including at school, at someone’s house or while shopping. Non-smartphone-using teens are more inclined to interact with their best friend at a place of worship, while there is no difference based on extracurricular activities such as sports and clubs, in a neighborhood, at work or online.

For teens, phone calls are reserved for closer relationships
Digital romance: How teen boys and girls differ
10 tech-related trends that shaped the decade
6 takeaways about teen friendships in the digital age
Most U.S. teens who use cellphones do it to pass time, connect with others, learn new things