Child Poverty Rate Stable Among Blacks, Drops Among Other Groups

The share of American children living in poverty has declined slightly since 2010 as the nation’s economy has improved. But the poverty rate has changed little for black children, the group most likely to be living in poverty, according to a new Pew Research Center analysis of Census Bureau data.

Overall, 20% of children in the U.S., or 14.7 million, lived in poverty in 2013 – down from 22%, or 16.3 million, in 2010. (Poverty in 2013 was defined as living in a household with an annual income below $23,624 for a family of four with two related children.) During this period, the poverty rate declined for Hispanic, white and Asian children. Among black children, however, the rate held steady at about 38%. Black children were almost four times as likely as white or Asian children to be living in poverty in 2013, and significantly more likely than Hispanic children.

In fact, the number of impoverished white children (4.1 million) may have dipped below the number of impoverished black children (4.2 million) for the first time since the U.S. Census began collecting this data in 1974, though this difference was not statistically significant. This is despite the fact that there are more than three times as many white children as black children living in the U.S. today. 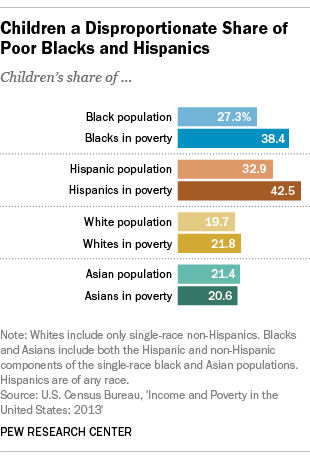 Children make up a larger share of America’s impoverished than of the population as a whole – those younger than 18 make up about a quarter of the total population, but make up about a third of all Americans in poverty.

Black and Hispanic children in particular are overrepresented: Children make up 27% of the black population, but 38% of blacks in poverty. And children account for 33% of all Hispanics, but 42% of impoverished Hispanics. By contrast, children make up roughly equal shares of the white and Asian populations and of whites and Asians living in poverty.