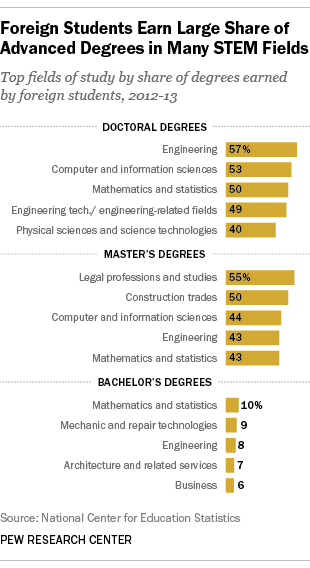 As the last of this year’s crop of U.S. college graduates march across the stage to receive their diplomas, more of them than ever are likely to be from overseas. In fact, a new Pew Research Center analysis of degrees granted by American colleges and universities shows that foreign students earn more than half of the advanced degrees in many science, technology, engineering and mathematics (STEM) fields.

At the baccalaureate level, foreign students still are overrepresented in STEM degrees, though the numbers are smaller. In 2012-2013, foreign students received just 3.5% of bachelor’s degrees from U.S. colleges and universities, but they earned 10.2% of all degrees in mathematics and statistics, 7.9% of all engineering degrees, and 6.7% of all bachelor’s degrees in architecture and related services.

We examined foreign students’ growing presence on U.S. campuses, their countries of origin and their fields of study. During the 2013-2014 year, more than 886,000 students from other countries were enrolled in U.S. colleges and universities or doing “optional practical training” – work related to their field of study. The foreign student population grew 72% from 1999 to 2013, according to the New York-based Institute of International Education; nearly all the increase came from Asian countries. 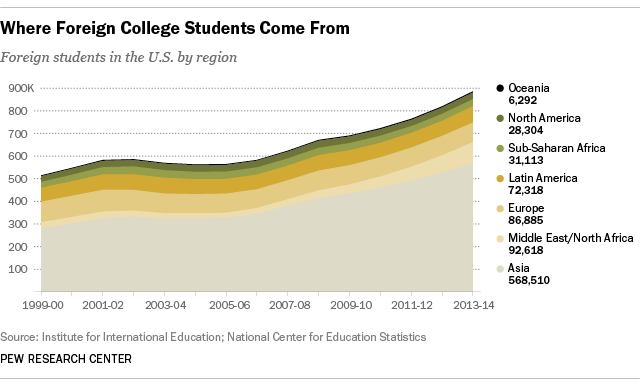 China, as you might expect, is the single biggest source of foreign college students, and most of the increase over the past decade and a half can be attributed to Chinese students. In 2013-2014, according to the IIE, 274,439 Chinese students were studying in the U.S. – 31% of the total, and more than five times the number from 15 years ago. Put another way, 15 years ago, just over one of every 10 foreign students was Chinese; last year, nearly one of every three were. According to a report in the journal Science, many Chinese families see U.S. higher education as a high-quality, affordable alternative to “the rigid undergraduate training offered by most Chinese universities.”

U.S. colleges and universities have long sought to attract top students from abroad, for both academic and financial reasons. As The Washington Post noted a few years back, “[i]nternational students are particularly coveted by public universities, where they pay two or three times the tuition charged to state residents.” Many schools use commissioned agents to recruit international students, a practice that was formally endorsed by the National Association for College Admission Counseling in 2013.

Foreign students at U.S. colleges are more concentrated in STEM fields than U.S. college students as a whole. Among foreign students at all academic levels, business was the most popular field of study in 2013-2014 (188,179). But the next-most-popular fields were engineering (160,128) and computer and information sciences (65,291). By contrast, the most popular fields of study for U.S. students at all levels were health professions, business, liberal arts/humanities and education; computer sciences and engineering ranked seventh and 10th, respectively.

But that doesn’t mean all foreign students have similar academic profiles. About three-fourths of Indian students (74%), for example, were studying some form of science, math or engineering in 2013-2014, a share exceeded only by Iranians (77.4%). Business was the single most popular area of study for Vietnamese (37.5%) and Chinese (28%) students, while the countries with the highest share of students studying intensive English (not typically a degree program on its own) were Kuwait (28.2%) and Saudi Arabia (24%).

More foreign grads of U.S. colleges are staying in the country to work
6 facts about America’s STEM workforce and those training for it
New foreign student enrollment at U.S. colleges and universities doubled since Great Recession
Number of foreign college graduates staying in U.S. to work climbed again in 2017, but growth has slowed
4 paths highly educated immigrants take to study and work in the U.S.