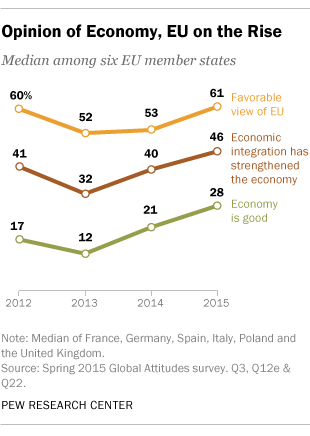 In the wake of Europe’s recession and currency crisis, support for the European Union and the belief that European economic integration was good for one’s country had declined precipitously across Europe, reaching a low point in 2013.

But this year, European public opinion is looking more upbeat. Favorable views of the EU and faith in a single, shared market are generally rebounding in the major EU member states, according to a new six-nation survey by the Pew Research Center.

However, the euro crisis has left a challenging political legacy: the rise of Eurosceptic political parties – those critical of a unified Europe – on both the left and the right. Here are five key takeaways from our report on current economic and political attitudes in Europe:

1In Europe, the economic mood is brightening somewhat. This year, a median of 28% in the six nations we surveyed – France, Germany, Italy, Poland, Spain and the United Kingdom – believe that economic conditions in their country are good. While that’s hardly an endorsement of the economy, it reflects an increase of 16 percentage points from two years ago.

The overall leavening of the public mood about current economic conditions has not translated into significant optimism about the economic future, however. A median of just 24% of Europeans believe their economy will improve over the next 12 months – a figure largely unchanged over the past four years.

2Europeans are more upbeat about the European Union. A median of 61% say they have a favorable opinion of the Brussels-based institution. This is up 9 points among the same six countries in 2013. Poles have the most positive view of the EU (72% favorable), as they have for each of the past several years. The British (51%) have the lowest regard for the EU, but even that is up from its low point in 2013.

A median of 46% express the view that European economic integration has strengthened their economy. This is up from 32% in 2013 and comparable to public sentiment about the European project in 2009, before the euro crisis really began to hit home. Belief in the benefits of deeper economic ties is greatest in Germany (59%) and the lowest in Italy (11%). Faith in the economic efficacy of integration has grown the most in the UK: up 23 points since 2013. 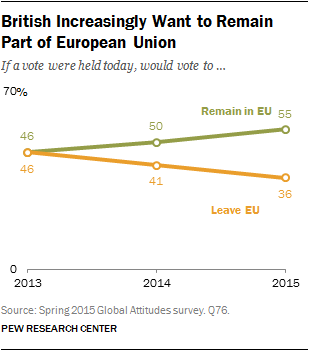 3The British want to stay in the EU. The United Kingdom intends to hold a referendum on continued membership in the European Union no later than the end of 2017. While a topic of heated debate in British political and policy circles, the British public’s enthusiasm for leaving the EU has been declining since 2013. That year, the British were evenly split on the issue, with 46% wanting to stay and 46% to leave. In this year’s Pew Research survey, 55% of Brits say they want to remain in the EU, while just 36% voice the desire to go.

4Europeans’ antipathy toward Muslims and Jews is waning. In the wake of the Charlie Hebdo massacre in Paris perpetrated by radical Islamists and the simultaneous attack on a Jewish grocery store, Europeans generally view Muslims and Jews positively. Roma, also known as Gypsies, are seen in a less sympathetic light. 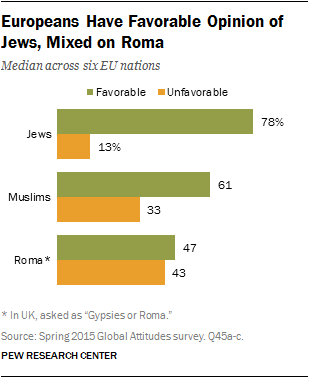 Roughly seven-in-ten or more adults in France (76%), the UK (72%) and Germany (69%) voice favorable views of Muslims. This sentiment is up 11 points in Germany since last year and 8 points in the UK. Just over half (52%) in Spain also hold positive views of Muslims.

About nine-in-ten French (92%) have a favorable view of Jews, similar to the 89% in 2014 and up from 72% in 1991. More than eight-in-ten British (86%) also voice a positive attitude toward Jews, largely unchanged in recent years. Eight-in-ten Germans (80%) hold a favorable opinion of Jews – little different from views in 2014, but a marked increase from 1991, when just 53% saw Jews in a positive light. The strongest anti-Semitic sentiment is in Poland, where 28% say they have an unfavorable opinion of Jews.

The most widespread anti-minority sentiment found in the survey was expressed against the Roma, also sometimes called Gypsies. Anti-Roma views are particularly prevalent among Italians (86% unfavorable) and the French (60% negative).

Meanwhile, more than half in Spain (58%), the UK (54%) and Germany (52%) voice a favorable opinion of Roma. Despite this relatively low regard for Roma compared with views of other minorities, views of Roma have actually improved in the past year. The median over the six nations has grown from 38% favorable to 47%, with the greatest improvement in the UK, where positive views rose by 16 points. 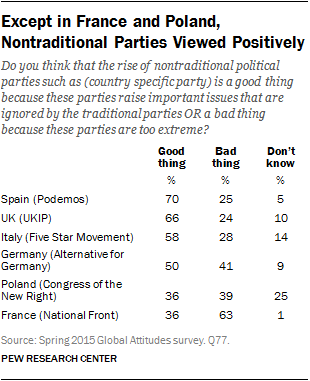 5Europeans show growing support for nontraditional political parties critical of the EU. In the past few years, several European countries have seen the rise of political parties on the left or right that are critical of the fiscal austerity imposed by the European Union and opposed to the institution’s growing power. Half or more of the public in four of the six EU nations surveyed voice the view that the emergence of these Eurosceptic populist parties has been a good thing for their country.

Seven-in-ten Spanish (70%) believe that the rise of left-wing, anti-austerity Podemos has been beneficial. Podemos came in third in local elections held in late May. Similarly, roughly two-thirds of the British (66%) voice the view that the UK Independence Party (UKIP), which advocates leaving the EU, is good for the United Kingdom. UKIP received the third-most votes in the early May British parliamentary elections.

A majority (58%) of Italians believe the environmentalist, Eurosceptic Five Star Movement is good for Italy. The rise of Alternative for Germany (AfD), which opposes the euro, is viewed as a positive development in Germany by half (50%) the public, which has given it a rising number of seats in recent state-level parliamentary elections.

In France, however, the surge of the National Front in recent elections has not been well-received by the general public. Fully 63% of the French hold the opinion that the National Front’s success has been bad for France, while just 36% believe it has been good. And the Poles are split over the emergence of the conservative, economically libertarian Congress of the New Right party. Roughly a third (36%) say it has been good for Poland, while 39% believe it has been bad; 25% voice no opinion.

European opinions of the refugee crisis in 5 charts

Europeans grow dissatisfied with the inequities of the economic system